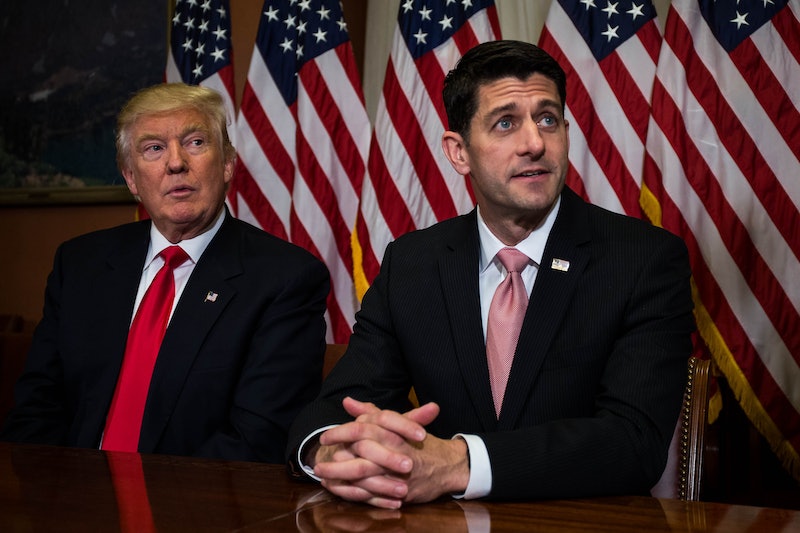 As GOP lawmakers maintain majorities in both chambers of Congress and Republican President-elect Donald Trump assumes the White House heading into 2017, one of the primary questions on many Americans' minds is: What happens if Republicans repeal Obamacare? That "if" might as well be a "when" — Republicans in Congress have attempted to repeal key provisions of the health care law dozens of times since its enactment in 2010. They've got a plan to push it through Congress within Trump's first days in office, and Trump has voiced support for it. What's less certain than the passing of such legislation is what will happen in the aftermath of Obamacare's undoing.

Republicans would be committing political suicide if their repeal legislation didn't include a transition period during which states, the federal government, and individuals who will be losing coverage under the Affordable Care Act sort out what to do next. So, we shouldn't expect the rollback to immediately yank away health insurance from the 20 million Americans who accessed it through Obamacare. Republican lawmakers said their plan would include a one- to two-year transition phase, Adam Cancryn and Paul Demko reported in POLITICO.

We have an idea of what measures Republicans will pursue to make insurance more widely available, but the question of what insurance companies will do in 2017 is more meddlesome. "The discussion right now about repeal and replacement is making the market very, very nervous," Washington Insurance Commissioner Mike Kreidler told POLITICO. "I would not be surprised to see the potential for a stampede to exit the market." Insurers may see people dropping from their enrollment lists over the next year, as some who fear losing coverage may cram expensive appointments and procedures in.

If insurance companies duck out of the exchange early, that could spell more immediate trouble for people who would simply lose their insurance without much notice. Concerning long-term results, we can expect the GOP to push a plan similar or identical to what it released as part of Paul Ryan's "Better Way" agenda. Under that outline, Republicans plan to enable people without employer-based health insurance to purchase plans with the assistance of a tax credit administered each month, as well as encouraging people to put some of their income into tax-exempt Health Savings Accounts and doing away with the individual mandate.

Whether that plan will work as well as or better than Obamacare remains to be seen. The potential undoing of Obamacare and its replacement wouldn't take hold immediately, even if Republicans have their way. But recipients of insurance under the law may feel more immediate impacts if their insurers leave the exchange in the coming year.