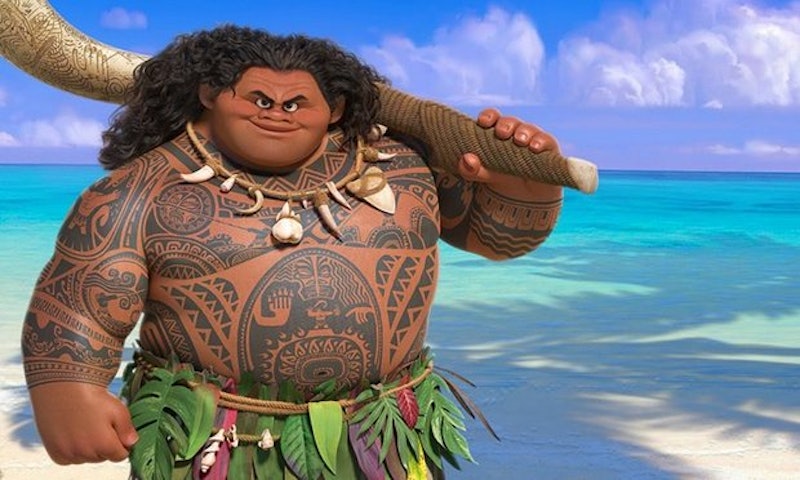 With its picturesque setting, headstrong female protagonist, and catchy soundtrack, Moana falls in line with the Disney animated musical tradition in many ways. But the studio and its filmmakers continue to explore different ways to tell stories through animation. In Moana , out Nov. 23, that innovation is most apparent in the character design of Maui, the Polynesian demigod who accompanies the heroine on her journey. Played by Dwayne "The Rock" Johnson, Maui is a physically imposing character whose expansive torso and arms are covered with intricate tattoos. These images are a scrapbook of the demigod's accomplishments, and not always a static one. You can learn a lot about the demigod (even more than he'll tell you himself) from looking at all of Maui's tattoos.

While most of Moana was created through 3D and CG animation, Maui's tattoos are hand-drawn. In an interview with D23, animation supervisor Eric Goldberg said that "both the CG animators and the hand-drawn animators were issued the scene together," so that the artists could collaborate on the interaction between Maui and his body art. According to The New York Times, the production consulted with Samoan tattoo artist Su’a Peter Sulu’ape to ensure cultural accuracy. The result of this painstaking work is another plane of Moana storytelling, all taking place on the body of a main character. Here's what you'll find there:

Since most of Maui's tattoos depict his accomplishments, a tiny, stylized version of him is represented too. In the same D23 interview, Goldberg described Mini-Maui as "Maui’s biggest cheerleader and supporter," "his alter ego," and "his conscience." Mini-Maui and big Maui interact a lot in the film, hence the collaboration between animators.

Maui Slows Down The Sun

In the teaser for the movie, Maui uses his tattoos to boast about his exploits and impress Moana. One of his deeds was to slow down the sun with his magical fish hook, a reference to a Maori myth where the demigod lengthens the day so more work can be done.

Maui Pulls Islands From The Sea

Legend has it that Maui created the Hawaiian Islands by pulling them out of the sea.

Maui prides himself on his bravery; in this scene, he defeats a large, tentacled sea monster.

Maui also defends his people and his territory from a terrifying lava creature, which is probably meant to represent an active volcano.

At least, it looks like a crab. This tattoo might represent a prior showdown with Tamatoa, the greedy crustacean voiced by Jermaine Clements.

On Maui's shoulder, you can see Mini-Maui standing in front of a large bird displaying its wingspan. He's a shapeshifter, so this image may be a nod to those capabilities. And on his lower chest, you can see a group of grateful worshipers honoring the demigod.

I don't know what this thing is, but it looks really dangerous.

Maui refers to himself as "demigod of the wind and sea." He generates the breezes that allow Moana's people to sail and explore. And since she hails from navigators, they owe their livelihood and culture to Maui.

Maui's tattoos in Moana are an artistic marvel as well as a unique storytelling device.