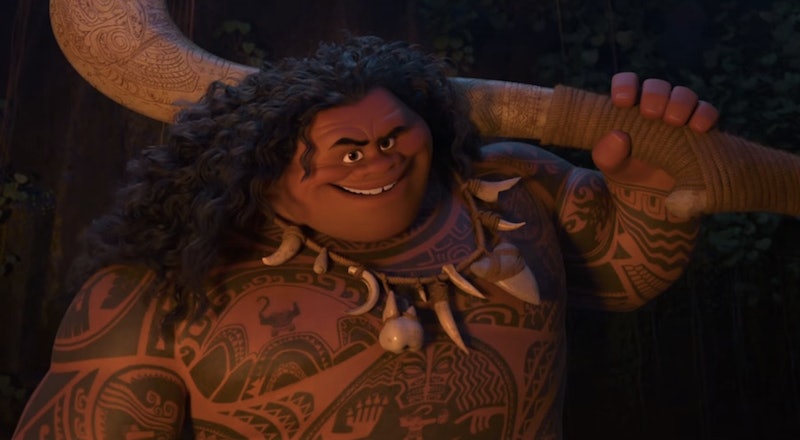 In Disney's newest animated film, Moana, the titular Polynesian princess is joined in her quest by a literal god. Voiced by Dwayne "The Rock" Johnson, the god Maui is quite the imposing figure. Larger than life, covered in sentient tattoos, and possessing a magical fish hook that allows him to shapeshift, Maui is perhaps Disney's most powerful hero since the Genie in Aladdin. But does he come from a real historical place like Genie? Is Maui from Moana a real Polynesian god?

He sure is. Maui is one of the most popular characters in Polynesian folklore; a demigod who shows up in various forms in the distinct mythologies of Samoa, Tonga, Tahiti, the Māori of New Zealand, and Hawaii (yes, the Hawaiin island of Maui was named after him). And though he's not exactly a dead ringer for the Maui in the movie (he's never been depicted as large as he is in Moana), there are still a good number of similarities between the trickster god from myth and the Hollywood version. It seems that certain aspects of Maui were taken from the different myths found throughout the islands of Polynesia, so let's take a look at how the movie version of Maui draws from myth.

In the film, Maui is a shapeshifter. This comes from Māori myths, which tell of how Maui was able to turn into several different types of birds in order to impress his brothers. A number of feats attributed to Maui in the movie show up in his song "You're Welcome," including lassoing the sun, lifting the sky, discovering fire, and hauling the islands up from the sea.

All of these details have their basis in myth as well. Maui lassoing the sun with either his magical fish hook, magical jawbone, or a rope made of hair in order to lengthen the days can be found in Māori, Hawaiian, and Tahitian tales of the god. His lifting of the sky, because some people were unable to stand up due to the sky being so low, is told in both Māori and Hawaiian myths. He pulled up various islands, depending on who's telling the story between the Māori, the Hawaiians, and the Tongans, from beneath the sea with his magical fish hook. And both the Māori and the Tahitians credit Maui with introducing fire to humans after stealing the secret of its source from a fire god.

Maui is quite the formidable character in Moana, and that's because he's based on one of the most famous and beloved heroes of Polynesian legend.