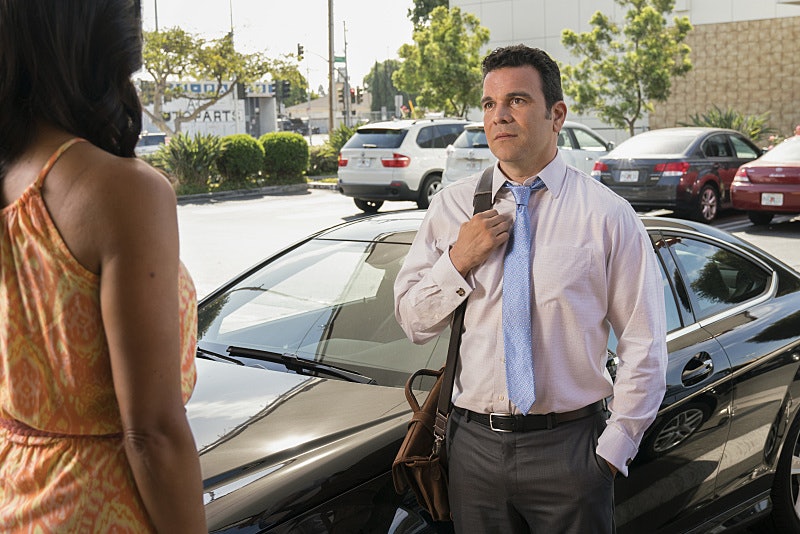 Bad news, Ro and Xo 'shippers. The relationship between Rogelio and Xiomara had a major setback during "Chapter 50" when Xo got back with her ex-boyfriend Bruce on Jane the Virgin. Not only is it always heartbreaking when Rogelio experiences genuine pain, but it doesn't seem like Bruce is a healthy choice for Xo. As Jane surely doesn't approve of her mom being with Bruce, this is going to cause some tension between Rogelio and Xo — and also Jane and Xo.

In "Chapter 49," Xo decided to open a dance school, so Rogelio assisted her with getting a studio in "Chapter 50." They shared memories of when they first got together in high school — which featured not one, but two dance offs between them! — and this made Rogelio realize his feelings for Xo weren't going away. On the other hand, Xo said she was thankful for Rogelio's friendship and was distracted by the fact that her new studio is next to the law office of her ex-lover Bruce, who she hadn't seen in years.

Xo used her proximity to Bruce to get closure for their past relationship, which entailed him lying to her about being married and then promising to leave his wife — but never doing it. She yelled at Bruce for mistreating her and that seemed to be the end of that. Yet, when Rogelio realized that kids are hypothetical while his love for Xo is real, he went to the dance studio to tell her so. But alas, Xo was slow dancing with Bruce when Rogelio arrived, so he escaped unseen — with his love for Xo devastatingly undeclared.

Later, Xo lied to Jane and Rogelio (over bowls of HBO — Honey Bunches of Oats, Tiago's new corporate sponsor) that she was done with Bruce. And since Xo actress Andrea Navedo teased to Bustle that Jane and her might fight over her ex-flame, that does not bode well for the mother and daughter.

As for Rogelio? Well, instead of getting too depressed about Xiomara and Bruce, he decided to actively pursue the thing that has been keeping him and Xo apart — having more children. Since the "Chapter 51" preview showed him speed dating with some special guest stars like Denise Richards and Carmen Electra, he's going to be looking for a new love who is willing to have children with him. And while I still want Xo and Rogelio to end up together, his search for the mother of his unborn children is going to make for one entertaining ride.