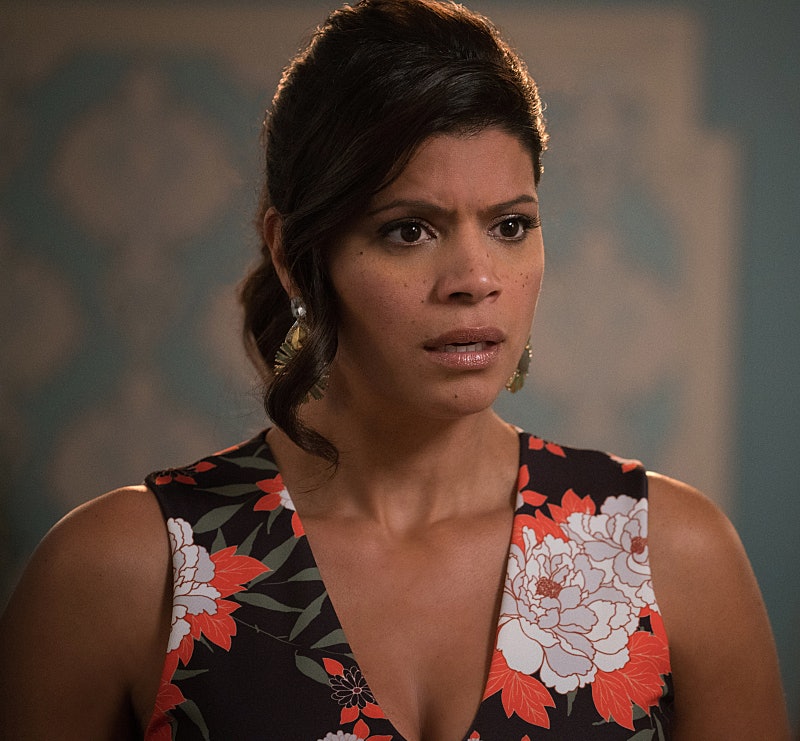 Jane the Virgin Season 2 went out with a literal bang after Michael was shot by Sin Rostro in disguise. But moments before that terrible cliffhanger, another big shocker happened — Xo discovered she was pregnant on Jane the Virgin. With the series returning on Monday, Oct. 17, the actor who plays Xiomara, Andrea Navedo, shares some Jane the Virgin Season 3 hints with Bustle about what to expect from Jane's charismatic mother as the Villanueva women deal with the drama that viewers have come to love and expect.

After sleeping with Rogelio's archnemesis Esteban, we saw Xo looking horrified at a positive pregnancy test following Jane's wedding in the Season 2 finale. As the telenovela-inspired series thrives on its jaw-dropping twists, Navedo understandably can't reveal much about whether or not Xo is pregnant, laughing as she says, "I don't even know how to answer!" What she can say about Xo's future is, "She has to make some decisions that are not easy decisions." That's actually an understatement since the reason Xo and Rogelio broke up in the first place was because Xo doesn't want to have any more children. While Navedo can't confirm anything, she does say that fans won't have to wait long to see how this storyline will play out. "She's got a big dilemma, but it will get resolved pretty quickly," Navedo says. "That's about all I can say."

While Navedo's coy answers don't reveal if Xo is actually pregnant — and if the baby would be Esteban's or Rogelio's — knowing that this "dilemma" will be handled quickly could mean that her pregnancy test was a false positive. It could also mean that if Xo is pregnant and doesn't want a child, she'll choose to have an abortion. Though Jane and Alba are devout Catholics, Jane the Virgin hasn't shied away from the discussion of abortion — whether it was Alba advising Xo to have an abortion when she became pregnant with Jane as a teenager or having it be an option for Jane when she was artificially inseminated. "There are so many different options, which have been addressed thus far," Navedo says. "And what I like is the show is not trying to tell anybody what to do."

From a personal perspective, the actor understands Xo's issue of not wanting children at this point in her life. Navedo, who has two children of her own, says, "Thank God I’ve never been in that position so I've never had to make that choice, which would be awful, like a really hard choice ... I don't think it's easy for any woman to make that decision." But, just like Jane the Virgin acknowledges that there are different options for dealing with an unplanned or unwanted pregnancy, so does Navedo. "I do believe that women should have a choice, a say, and outsiders shouldn't be dictating what a woman should or can do with her body," she says.

Whatever happens to Xo, viewers should know she will still have an active romantic life in Season 3 with a new/old love interest in the form of Desperate Housewives' Ricardo Chavira. "He's gonna be an ex-lover that comes back on the scene," Navedo says. However, this may not be great news for fans who get upset when Xo and Jane fight, as Navedo teases that Chavira's presence might strain their relationship. While she personally hasn't read the scripts yet, she says that Chavira mentioned, "Something along the lines of Jane not being happy about something with me and him. But that's all I know, I really don't know what's gonna happen." She also clarifies that this hint about a potential Jane-Xo feud is "coming from [Chavira], that's not coming from [showrunner] Jennie Urman, so I have no idea."

Hopefully he's wrong, or the possible argument is resolved quickly, as Navedo says that fighting on screen with Gina Rodriguez is just as hard for them as it is for viewers to watch. "We would have these scenes where we're fighting and then when they would call cut we were both like, 'Oh my God, I'm so sorry, I love you,'" Navedo says. "We're like hugging each other cause we felt so bad that we were being so mean to each other and we couldn't stand it." Luckily, seeing these women make up is almost worth the stress of seeing them be mad at one another.

That other core relationship that will be influenced by Xo dating Chavira's character is the one between Rogelio and Xiomara, and it may not be in a good way. When I ask if she thinks Xo and Rogelio should be together next season, Navedo says, "I think it's a time for Xiomara to kind of discover herself. She's gonna be making some big decisions about career and stuff like that in Season 3 and trying to mature."

But that doesn't mean the actor doesn't want to see them together eventually. "As much as I, Andrea, would like Xiomara to be with Rogelio, I also want Xiomara to grow up and mature and have a journey, like a real human, and not stay stuck in an infantile state," she says. "I'm not sure that Rogelio is a part of that. Sometimes you have to walk away from the ones you love to really grow and appreciate them and learn about who you are as a person to gain a little bit of perspective — a little breathing room."

I'm glad that even with a new love interest and many other storylines heading into Season 3, Jane the Virgin will still make time for Xo to have some new career opportunities and self-discovery. The feistiest of the Villaneuva women certainly doesn't need to be defined by anyone else, as Xo is a character unto herself. "She kind of owns who she is. She doesn't make any bones about it," Navedo says. And as long as she continues to own it, Jane the Virgin should be as exciting as ever when Season 3 premieres on Oct. 17 because, as Navedo puts it, "life would be so boring without Xiomara."