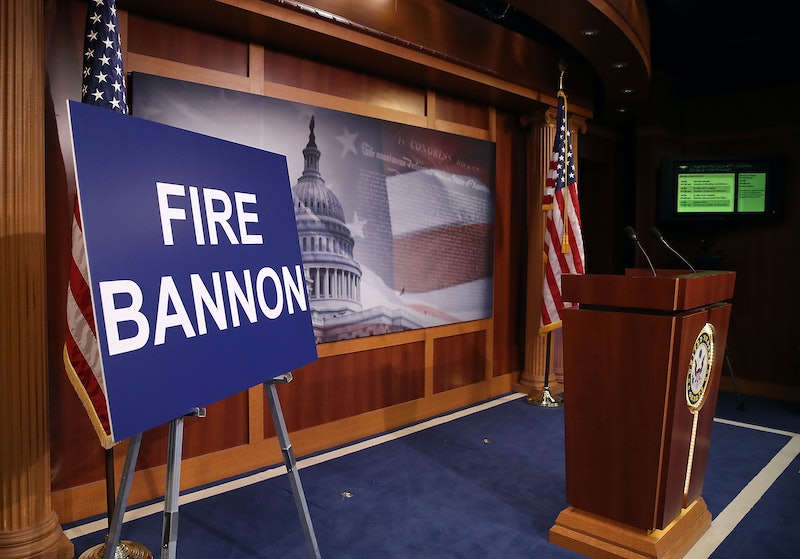 When President-elect Donald Trump announced that he would be giving the high-ranking position of senior White House adviser to his campaign CEO and Breitbart publisher Steve Bannon, outrage was swift. At press time, several thousand people have signed a series of petitions demanding that Trump rescind the appointment, given Bannon's self-proclaimed affinity for the "alt-right." And while team Trump hasn't signaled any intention of changing its mind, several politicians have used increasingly strong language to condemn Bannon's appointment.

Howard Dean, the former Vermont governor and one-time presidential aspirant who is currently vying to become chairman of the Democratic National Committee, pulled no punches when discussing Bannon during an interview with Canada's CTV. Dean pointed to the sharp contrasts within the emerging administration. For example, he noted that Trump's chief of staff, longtime Republican insider Reince Priebus, is much more conservative than Dean, but he considers Priebus "a reasonable person ... somebody you can talk to."

By comparison, Dean claimed Bannon "is a Nazi." Of course, Bannon would never describe himself as such. Instead, he's proudly stated that he promotes the alt-right. When the reporter questioned him on the use of the historically charged term, Dean responded: "Well, he's anti-Semitic, he's anti-black, and he's anti-women. ... It calls into question Donald Trump's judgment."

California Rep. Adam Schiff, a Democrat and ranking member of the House Intelligence Committee, was also wary of Bannon's reputation and how it could influence the White House. And he clearly didn't see much separation between Bannon and the tone Breitbart adopted under his leadership.

Asked about Dean's classification of Bannon as a "Nazi," though, Schiff hedged. "Well, I don't think a Nazi is accurate," Schiff told CNN's Jake Tapper on Nov. 21, though he continued:

But, look, you know, he has flirted with anti-Semites and racist and bigots and misogynists. That's what his website has largely or often been about. So, there's no denying that he has encouraged and invited in and giving a platform for bigots.

That doesn't make him a Nazi, but it also means he's not somebody that should have any position or responsibility in the White House, and the fact that a president-elect would choose him tells me that he's not ready to endorse himself from that part of his base and that's alarming I think quite despicable really.

Minnesota Rep. Keith Ellison, who is running against Dean for the DNC chairmanship, was only slightly more reserved in his comments. As the first Muslim American elected to serve in Congress, Ellison's criticism of Bannon was measured but pointed. Ellison wrote:

Mr. Bannon has called the Pope a "commie." He has referred to the Civil War as the "war of Southern Independence." He referred to liberal, college educated women as "a bunch of dykes." And sworn testimony in a legal case alleged Mr. Bannon was a domestic abuser and that he stated he "didn't want [his children] going to school with Jews."

Mr. Bannon is adored by white supremacists, white nationalists, anti-Semites, neo-Nazis, and the KKK. It's not hard to see why.

Bannon has denied making the alleged comment about his children's schooling.

Outgoing Senate Minority Leader Harry Reid was similarly sharp-tongued in the wake of Bannon's appointment. In a statement issued through his spokesperson on Nov. 13, the Nevada Democrat alleged that Bannon represents the worst of white supremacists. Speaking in the Senate floor Nov. 16, Reid delivered a passionate speech, calling on Trump to rescind his appointment of Bannon and "rise to the dignity of the office of the president of the United States."

House Minority Leader Nancy Pelosi also called Bannon a "white supremacist." "Bringing Steve Bannon into the White House is an alarming signal that President-elect Trump remains committed to the hateful and divisive vision that defined his campaign," the California Democrat claimed on Nov. 14. "There must be no sugarcoating the reality that a white nationalist has been named chief strategist for the Trump Administration."

In a press conference on Nov. 15, Sens. Jeff Merkley of Oregon, Mazie Hirono of Hawaii, and Ed Markey of Massachusetts each delivered their own scathing statements about the future senior White House adviser, standing beside a large sign that read "Fire Bannon" in capital block letters.

If the saying is true and you are the company you keep, Donald Trump has chosen to champion the positions of neo-Nazis, white nationalists and anti-Semites by appointing Steve Bannon as chief strategist and senior counselor.

There is no place in our society, let alone the White House, for purveyors like Steve Bannon of hate and violence against any group of Americans. President-elect Trump will forever poison the well with Congress and the American people by appointing a figure who has fueled the rhetoric and activities of hate groups that actively promote violence against immigrants, Muslims, women, African-Americans, the LGBTQ community, and people of Jewish faith.

Sen. Cory Booker, a New Jersey Democrat has proven himself to be a steady, strong voice for progressive causes in Congress, was characteristically forthcoming with his own condemnation of Bannon.

"Bannon won't build bridges, he will burn them," Booker wrote. "He is unfit to advise America's commander-in-chief. Donald Trump should reverse the decision to hire him and chart a different course for the good of the American people."