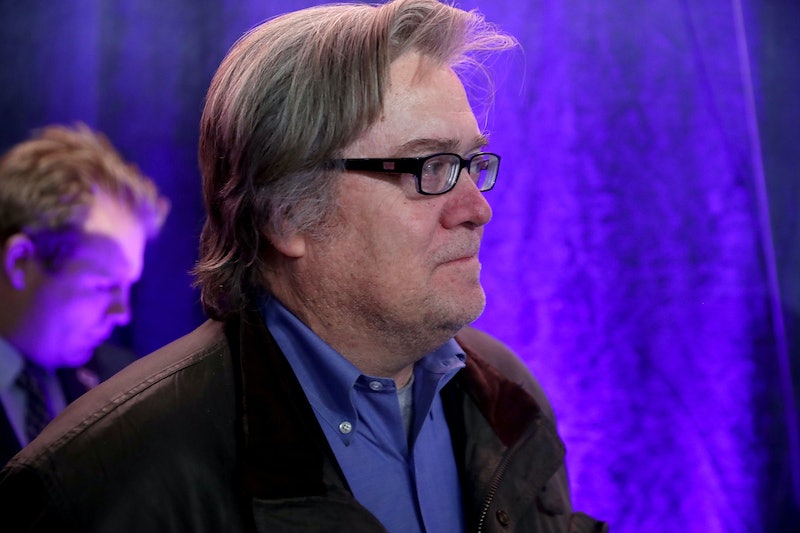 Of the many deplorable things President-elect Donald Trump has done, appointing Steve Bannon as a senior strategist is surely one of the worst, in my opinion. Prior to agreeing to join the Trump White House, Bannon ran the news site Breitbart, and later became the CEO of Trump’s campaign. But when will Bannon start as senior strategist to Trump?

In all likelihood, he’ll officially assume the post on Jan. 20, when Trump takes the oath of office and becomes the 45th president of the United States. It certainly won’t happen before then. The position Bannon is taking is an executive-level job called counselor to the president, and Barack Obama will still be president until Jan. 20. Likewise, given that Bannon has already been offered the job and accepted it, there’s no reason to believe there will be any delay in him assuming the position.

That said, the distinction between Bannon almost having the job and Bannon having the job isn’t all that significant. He’s been advising Trump in one form or another since before the election, and is almost certainly still doing so as Trump plans his transition. Whether he officially has the job title of counselor to the president as he counsels the incoming president is largely a technicality.

Counselor to the president isn’t a cabinet position, which means Bannon doesn’t need to be confirmed by the Senate in order to assume his post. That said, if you’d like to protest Bannon’s nomination by calling your congressional representatives, then by all means, do so. Making your dissent known to your representatives in Washington, D.C. is what democracy is all about.

Trump drew immediate and widespread criticism after bringing Bannon into the fold, which isn’t the least bit surprising. As head of Breitbart, he published articles with headlines like “Birth Control Makes Women Unattractive And Crazy" and “Bill Kristol: Republican Spoiler, Renegade Jew.” According to his ex-wife’s court testimony, Bannon said that he didn't want his children going to school with Jewish children. Bannon denies those accusations.

While it’s depressing and frightening to know that Bannon, who has flirted with misogyny and white nationalism, among other things, will be the new president’s top advisor, one can perhaps take solace in the fact that he has no experience in government. Either way, he won't assume the position without major criticism from both politicians and the public.