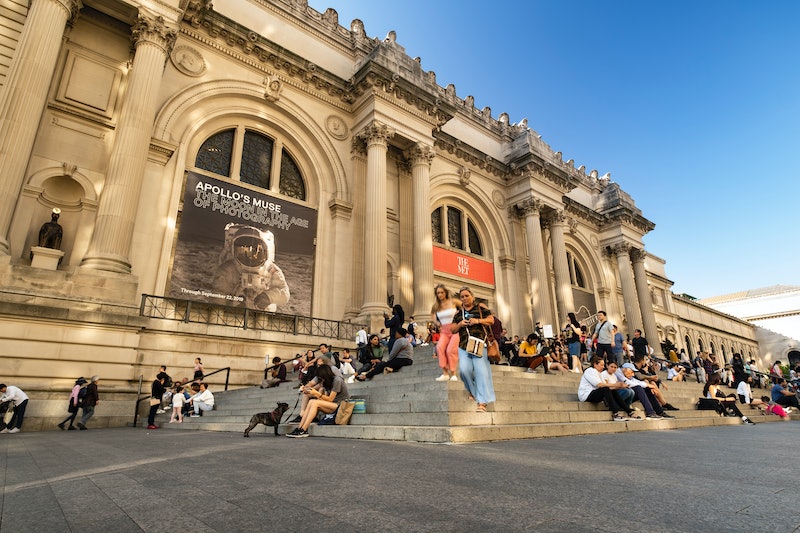 It's easy to get swept up in a brilliant work of literature, and find yourself wishing that you could actually visit those far off, fictional lands. But your eleventh birthday came and went with no Hogwarts letter to be found. And no matter how many times you drunkenly stumble into your closet, you're probably not going to find Narnia. Still, there are many real life locations from books to be found in the actual, non-fictional world. Here are just a few of the spots from literature that you can visit in New York City.

New York has inspired countless literary works (and more than one disaster movie). Notable works of memoir, fiction, graphic novel, fantasy, and everything in between have been centered around the Big Apple (not that most New Yorkers need the ego boost). Just wandering around the city, there's a good chance that you'll come across a landmark you recognize from TV, film, literature, or your Brooklyn cousin's Instagram. A lot of city landmarks are perfectly free to visit, too, so you can save up your money for Hamilton tickets and/or rent on your coffin-sized apartment.

But if you want to go a step further and make a literary day of it, here are some of the key spots to hit:

1. The Metropolitan Museum of Art, From the Mixed Up Files of Mrs. Basil E. Frainkweiler by E.L. Konigsburg

Remember when you first read From t he Mixed Up Files of Mrs. Basil E. Frainkweiler , and then you decided to run away and live in the Metropolitan Museum of Art? Yeah, well, you can't live there, but you can retrace Claudia and Jamie's steps and visit one of the most beautiful art museums in the world. The entrance fee is a suggested donation, too, so feel free to pay whatever you can. Just don't try to actually sleep on the historic furniture.

Yes, even elite Wall Street murderers sometimes go to Brookyln. The River Café, with its stunning views of the financial district, is one of the few Patrick Bateman haunts that is entirely real and still in existence. They also claim to have invented the phrase "free range chicken." Check it out if you want a true finance bro experience, but be warned that dinner isn't cheap (although you probably won't be murdered by Patrick Bateman, so that's a plus).

4. The Plaza Hotel, The Great Gatsby by F. Scott Fitzgerald

If you can't afford to buy a mansion on Long Island and throw lavish parties in the hopes that the love of your life will finally notice you, then you can do the next best thing and visit the Plaza Hotel. This is where Gatsby and Tom have one of their least comfortable conversations in the book. The rooms are pricey, but you can loiter in the lobby for free and pretend to be new money from West Egg.

Colson Whitehead's Zone One gives us a fantastically grim vision of a New York overrun by zombies, with humanity struggling to reclaim lower Manhattan. If you'd like to reenact some key scenes, head downtown to South Ferry Station during 6am rush hour and fight your way through the shambling corpses. There's a definite zombie-apocalypse vibe.

The Cheslea Hotel is currently closed to guests for renevations, but it's such a fixture of the New York literary landscape that it's still worth a peek in the lobby. Patti Smith's memoir, Just Kids, recalls her days as a young artist in the Cheslea Hotel, and writers from Arhtur C. Clarke to Allen Ginsberg to Arthur Miller have both lived in the hotel and written about it.

Washington Square was first published in 1880, so it's safe to say that today's lower Manhattan is quite different from what Henry James was familiar with. But still, if you enjoyed immersing yourself in the world of Catherin Sloper, you can visit the actual Washington Square and see just how much the city has changed.

8. The Central Park Carousel, A Catcher in the Rye by J.D. Salinger

It took me a ridiculously long amount of time to realize that the stylized horse on the classic cover of The Catcher in the Rye is, in fact, a carousel horse. Get it? The only thing that ever makes Holden Caulfield even a little bit happy is watching his little sister riding the Central Park carousel. If you, too, want to make Holden happy, you can still head out to the park and ride that very same carousel today (just be ready to wait in line).