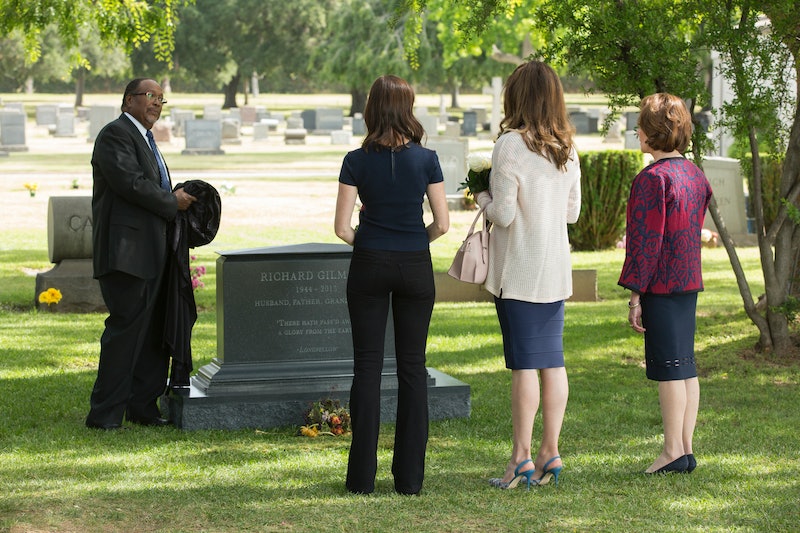 It was a shock when Ed Herrmann, who played Richard Gilmore on Gilmore Girls, died of brain cancer in 2014, and it was just as much a shock to Emily, Lorelai, and Rory when Richard died of a sudden heart attack about four months before the beginning of “Winter,” the first installment in Gilmore Girls: A Year In The Life. No one expected that the Gilmore patriarch would be taken away so quickly, especially his family. Emily, Lorelai, and Rory gave Richard a beautiful service, and the items displayed at Richard’s funeral in the Gilmore Girls revival show what a wonderful man he really was.

While Richard’s funeral ceremony may have gone as smoothly as a funeral service can go, the gathering back at the house did not. As we learn in “Winter,” Lorelai, Emily, and the last of the funeral guests were going around in a circle, telling stories about Richard — anecdotes, jokes, his preferences, etc. Everyone had something beautiful to say, until it was Lorelai’s turn. She said something about how Richard accidentally forgot her and left her in a steamer trunk once. Needless to say, Emily was both mortified and devastated, and they had a big blowup right after.

As Emily and Rory both said to Lorelai after, why couldn’t she have just said something benign, like her father liked reading? Or he was a fan of good Scotch? Lorelai can really be selfish sometimes — she’s not good at pushing her feelings down to make others feel better. I get that she was grieving, but Lorelai needed to be strong for her mother, and she wasn’t. Luckily, the items at Richard’s funeral do a better job of explaining the important relationships he had with his family — especially Rory.

Rory brought this album to the hospital when Richard had his heart attack in Season 7, and it was among his favorites, both because he really liked Chuck Berry and because Rory got the album for him for his birthday toward the beginning of the series. Berry recorded it in 1967 with the Steve Miller Band. According to Rolling Stone’s review of the album, it was the very first recorded live in the city of San Francisco.

Leaves Of Grass By Walt Whitman

Rory and Richard both shared a deep, deep love of literature, and after a trip to Europe, Richard and Emily brought Rory back a copy of Walt Whitman’s best-known work, translated into Greek. Rory was delighted by the gift, and it signified another strong bond between Rory and Richard.

I am personally not sure how one could read this book because it’s full of math diagrams, but Richard did mention partaking in its pages during Gilmore Girls. Richard always liked a good puzzle, and he liked to stay sharp, so it’s no surprise he held one of the fathers of mathematics’ famous volumes in high regard.

Richard liked nothing more than a day on the links in his free time, so it’s no wonder that he’d want his golf clubs close no matter what.

A Photo Of Emily & Richard

This photo was taken at their vow renewal during their dance to “Wedding Bell Blues” by Laura Nyro. Richard and Emily had recently gone through a rough patch during their separation, and this photo represents the renewed love they shared and the renewed dedication to their marriage.

Emily (it no doubt was Emily) did a wonderful job putting together all of Richard’s favorite things to represent him at his funeral. Even though he’s gone from Gilmore world, Richard’s presence certainly looms large over Gilmore Girls: A Year In The Life, and things shouldn't be any other way.