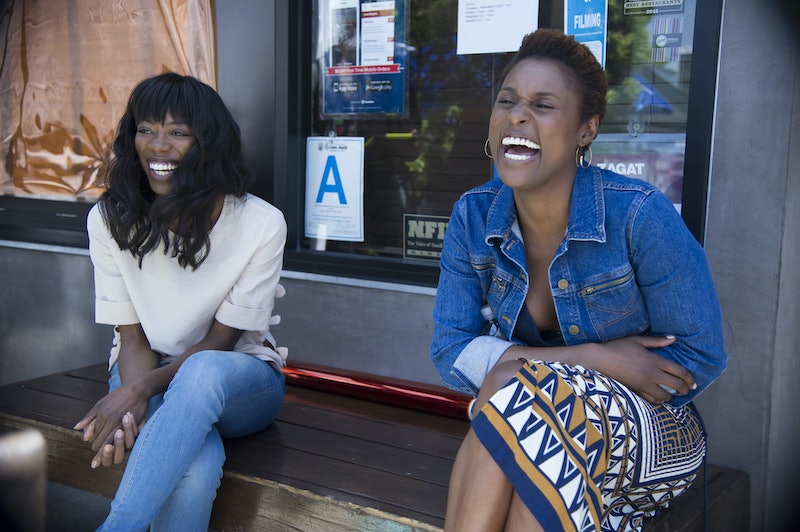 Though it may not provide total closure, the Insecure season finale does something very important — it makes Issa and Molly best friends again, after a very awkward trip to Malibu to spend a weekend with their group of friends. I would say if there’s any flaw in this finale, it’s that Issa doesn’t really get the opportunity to get real about why she slept with Daniel or why she’s now so desperate to regain her relationship with Lawrence. Is she realizing that she made a mistake? Was her discretion evidence that there was some deeper issues between the couple? Since Insecure went out of its way to include multiple scenes from Lawrence’s perspective, it’s very possible that he’ll remain a part of the series in Season 2.

However, the final time he appears onscreen — hooking up with the woman he used to hang out with at lunch while he briefly worked at Best Buy — suggests that he may have found closure in the form of someone who was totally supportive of him at all times, largely because they didn’t have a particularly close or intimate relationship. This ending, with Issa judged as the purely guilty party, diverges from the first half of the season, which was all about how both Issa and Lawrence’s insecurities (not trying to be funny, I swear) was damaging their relationship. His need to be inspired by his work was about to lead him to the potentially career-ending decision to quit his newly acquired job in order to resume his half-hearted work on his app.

At the same time, Issa definitely needed a wakeup call, and thankfully, in the one positive thing that comes out of the finale, she is able to reunite with Molly after their fight. Of course these two were not going to stop being friends after one argument, but for a while it did kind of feel like there was a chance that they could stay in a cold war for a lot longer. But Molly can sense that Issa really cares about getting the chance to talk to Lawrence, so she sucks it up, gets over her hurt feelings about being called out by their whole group of friends, and hustles back to South LA in the middle of the night to give Issa a ride (if you ever need to test your friendship with someone in Los Angeles, ask them to take three freeways for you).

And after Issa realizes that Lawrence is done with the relationship, she retreats to Molly’s embrace and an uncertain future. Thankfully, Insecure’s future is certain — the series was renewed for a second season already. Because of that, this final, unconfident note is poignant rather than maddening, the way it might be if the show was vulnerable to a surprise cancellation. And after the stylistically bold change in perspective that Insecure Season 1 offered, I'm excited to see where Issa and Molly go from here.