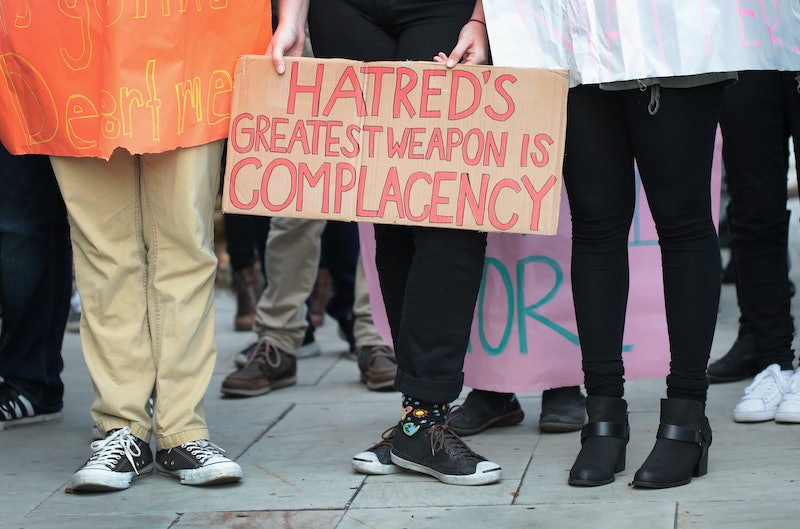 Too many of President-elect Donald Trump's Cabinet picks have come from the pool of Islamophobic, homophobic, misogynistic, white supremacist thinkers known as "the alt-right." You're going to hear a lot about them and about their damaging political opinions in the days to come, so I've put together this list of 12 essays to help you understand white privilege, in the hopes that it will prepare you to fight for what's right in the hard years ahead.

The U.S. is a country full of racism without racists. Most people will acknowledge that some form of racial bias prevents people of color from achieving economic success at the same rate as their white peers, but few are comfortable with calling out the ideas, institutions, media, politicians, and citizens who promote racism and work on a foundation built of harmful stereotypes — especially when they learn that their faves are problematic. Even fewer are willing to address their role in promoting racist sentiments and casual stereotyping, instead opting to hide behind the tired arguments that "no one has a sense of humor anymore" and "people should stop being so sensitive," as if it is a sign of weakness to be hurt or angered by hatred and inequality.

Maybe I'm talking to you. Maybe I'm not. But read the essays on white privilege below before you decide.

1. "White Fragility: Why It's So Hard to Talk to White People about Racism" by Robin DiAngelo

White people have a difficult time accepting that words, ideas, and actions can be racist even if they are not intended to be. As Robin DiAngelo points out, this is because they "move through a wholly racialized world with an unracialized identity (e.g. white people can represent all of humanity, people of color can only represent their racial selves)."

Read DiAngelo's essay on white fragility, accept that anyone — even the people you consider good, upright, and progressive — may be racist.

When it comes to privilege-related discourse, you don't get much better than Peggy McIntosh's "Unpacking the Invisible Knapsack." Going through this 50-point checklist will open your eyes to how white privilege works in your favor on a day-to-day basis.

If I had a dollar for every time some broke white person whined to me about how they couldn't possibly be privileged when their parents never went to college...

Don't be that guy! Read this essay and understand that you can have white privilege without having class privilege.

4. "Patriotism Is for Black People: Colin Kaepernick, Donald Trump, and the Selectivity of White Rage" by Tim Wise

A warning: the first two paragraphs or so of Tim Wise's essay will probably make you a little bit angry. Just keep reading.

5. "What Is Whiteness?" by Nell Irvin Painter

Nell Irvin Painter is the author of the excellent nonfiction title, The History of White People, which explores not only how the concept of individual races emerged over time, but how whiteness has historically been constructed to exclude those deemed unworthy. If you don't have time to read her book, her New York Times essay, "What Is Whiteness?", is an excellent place to start.

6. "Mourning for Whiteness" by Toni Morrison

You've probably seen the headlines proclaiming that white people elected Donald Trump. Regardless of how you and I voted, the truth is that we, as a collective group, voted him into office. If you're still holding your head and wondering how this is possible, read Toni Morrison's post-election New Yorker essay, "Mourning for Whiteness."

7. "What I Said When My White Friend Asked for My Black Opinion on White Privilege" by Lori Lakin Hutcherson

White folks, people of color do not owe us anything: not an explanation or their time, not their patience or even their kindness. So we should all be extremely grateful that Lori Lakin Hutcherson took the time to write this poignant, personal exposition on how privilege protects her white friend from the aggression she experiences on a daily basis. Read it.

8. "Why It's Not Racist When People of Color Point Out White Supremacy in White People's Actions" by Andrew Hernann

Here's the thing, y'all: some things are not two-way streets. "Racism cannot go in reverse," as Andrew Hernann points out in this excellent article, so, no, a person of color is not being racist when they tell you that what you are doing or saying is.

Every time a white person tells me that they and their children "don't see color," I want to pull my hair out. Being "colorblind" isn't a good thing, because it assumes that everyone in the U.S. has the same fair shake, regardless of race or ethnicity, and ignores all evidence to the contrary.

Yes, talking to children about injustice can be difficult, because we don't want to show them how ugly the world is. But children of color don't have the privilege of living in a world in which they believe everyone is equal. As Danielle McDonald's "The Hard Talk" puts it: "A 5yo black girl survived last night by playing dead. Surely my 6yo white son can survive a conversation about why she matters. [sic]"

10. "On Police Brutality in America" by Victor "Kool A.D." Vazquez

Although it was written relatively early on in the Black Lives Matter movement — at a time when the murders of Tamir Rice and Akai Gurley by police officers had not yet been obscured by other, more recent cases — Victor "Kool A.D." Vazquez's essay is no less informative today as then. "On Police Brutality in America" does an excellent job of summarizing the pervasive, anti-black biases that cause officers, prosecutors, the media, and the public to excuse police killings of black men, women, and children.

11. "Native Americans Get Shot by Cops at an Astonishing Rate" by AJ Vicens

It's rarely talked about, except to divert from the discussion of other police killings, but Native Americans aged 20 to 44 are among the most likely groups to be killed by law enforcement officers, alongside African Americans aged 20 to 34. Given that local and federal law enforcement presence is increasing at Standing Rock Native American Reservation, where peaceful protests against the Dakota Access Pipeline have been going on for months, this 2015 piece from Mother Jones is a must-read.

12. "The Case for Reparations" by Ta-Nehisi Coates

OK, so you've read about how white privilege affects your life, and how it creates a double standard for people of color. You know which racial demographics are killed most often by police, that reverse racism does not exist, and that teaching your kids to be "colorblind" doesn't actually address racial inequality.

Now, it's time for you to learn just how much the United States' inherent white supremacy has impacted, and continues to impact, the lives of black Americans. Between the World and Me author Ta-Nehisi Coates' "The Case for Reparations" is a long and essential read, laying out not only how the U.S. has spent centuries marginalizing and brutalizing its black citizens, but also how the country can heal the wounds it has inflicted on these communities. As Coates puts it:

Now we have half-stepped away from our long centuries of despoilment, promising, “Never again.” But still we are haunted. It is as though we have run up a credit-card bill and, having pledged to charge no more, remain befuddled that the balance does not disappear. The effects of that balance, interest accruing daily, are all around us.