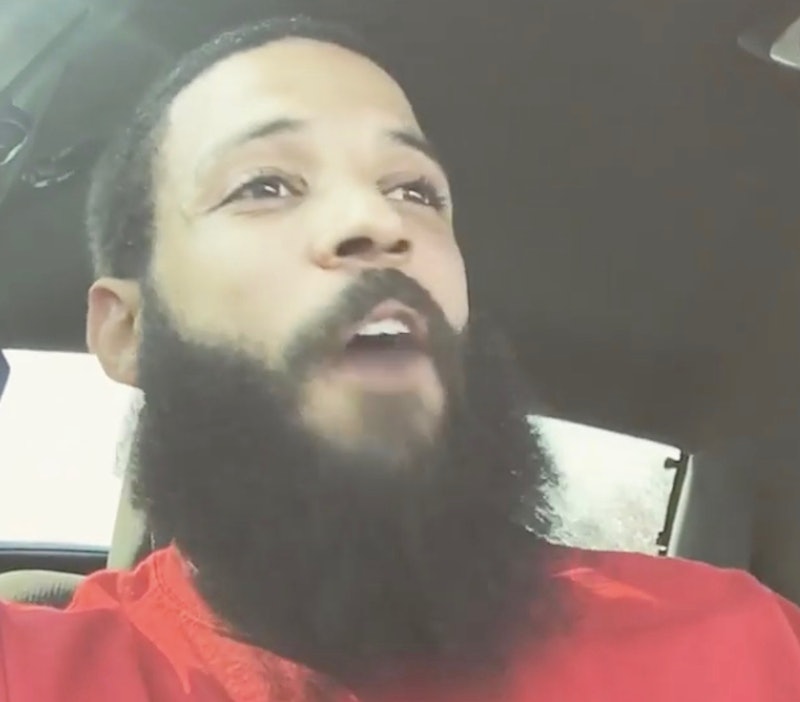 When the 31-year-old GREY, The Vegan Rapper, came across my Twitter feed late last week, I could tell his new vegan Thanksgiving rap was going to go (even more) viral. I wasn't wrong — it's been a busy week for the Atlanta-based rapper, who's just done a studio recording of his amazingly-catchy vegan Thanksgiving rap. The video, which he posted as an adaptation of Instagram user RemixGodSuede's entry for the #UNameItChallenge, is catchy as hell. The original track sampled a clip from gospel singer Shirley Caesar, whose "beans, greens, potatoes, tomatoes" chant, paired with organs and drums, make it an irresistible Thanksgiving song. When GREY heard it, he knew he had to make his own vegan version, to represent those of us who will not be eating animals this Thanksgiving.

"When I saw the video on Instagram and heard the beat, I couldn't resist," GREY tells Bustle. "I told myself I have to spit something on this. The beat was crazy. I couldn't stop listening to it. The chorus had Shirley Caesar already talking about food, so it was perfect. I decided to rap about what I would have on Thanksgiving — a Vegan Thanksgiving."

OK, vegans. I think we found our new biggest crush. And don't even get me started on that awesome beard. Just watch.

GREY has been vegan for eight months now, after his girlfriend began the transition to veganism and started making plant-based dishes, encouraging him to try them. "It looked good, tasted good — so I jumped on board. I quit eating meat, chicken, and fish, cold turkey," GREY says, presumably pun-intended. "Once I started to understand what's in the food that we eat and the effects it can have on the body, in addition to the obvious animal cruelty behind it — it was enough for me to start a new lifestyle."

As for where veganism fits into other intersectional causes like civil rights and environmentalism, GREY tells Bustle he believes "veganism reflects the complex relationship human beings have with the planet." He also knows that the transition to veganism isn't an easy one for everybody — but he also doesn't think that's ultimately an excuse not to prioritize what's right.

"First of all, I understand that eating healthy can get pretty expensive. However, so can eating out and buying clothes and taking a vacation. You just have to put your money where your values are. Do you want to spend $400 on a night turning up or on organic plant-based groceries that will contribute to your well-being and the longevity of life on the planet as a whole?"

GREY has chosen the latter, and it's clearly working out for him just fine. He has a project called "BMCW" dropping "very soon," and a new partnership with the heARTofcool, a creative collective and content management movement. Together, they seek to help educate and spread awareness about healthier food options, veganism, and creative activism.

And here's the official music video.

As for the experience of going viral and being newly Vegan Internet Famous, GREY says simply that "it's crazy and awesome at the same time. I am very humbled by the entire experience." Yeah, like I said. New vegan crush.

More like this
7 Store-Bought Bread Rolls For Thanksgiving That Taste Homemade
By Chelsey Grasso and Lauren Grant
How Long Does Leftover Stuffing Last? Here's When To Toss It
By Chelsey Grasso and Alexis Morillo
16 Friendsgiving Recipes Your Besties Will Love
By Alexis Morillo
The Best Wines For Literally Every Type Of Holiday Gathering
By Christina Amoroso
Get Even More From Bustle — Sign Up For The Newsletter