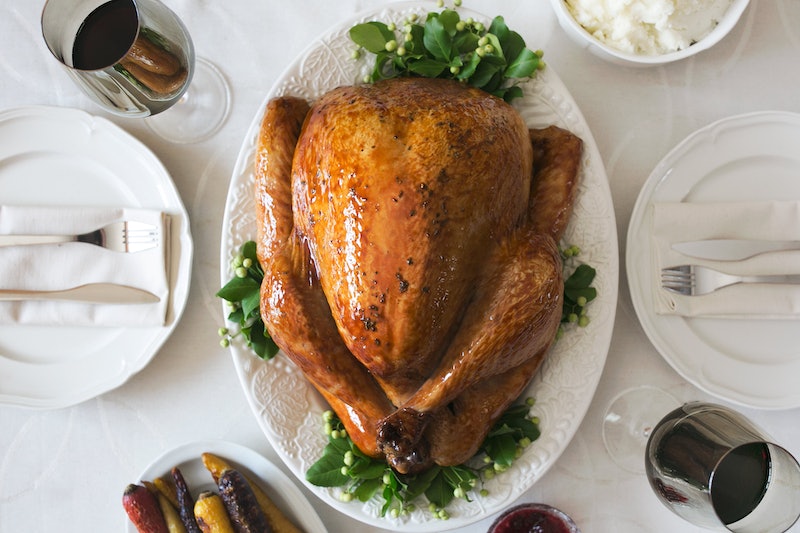 When I was a kid, I remember meeting a turkey once and actually thinking, That animal is ugly. No wonder we eat it. Unfortunately for turkeys, it is harder for humans to empathize with them than some other farm animals that are "cuter," like pigs and cows. Fortunately, I've come a long way since I was a kid, and I am now a vegan who aims to learn about the ways that all of earth's creatures deserve freedom and life. Considering it is nearly time for my vegan Thanksgiving, now seems like a good time to learn more about turkeys.

So I did my research, and spoke with Vice President of Communications at Mercy For Animals, Ari Solomon, to find out more about why we should all give turkeys a chance to live and be free. What I found was both adorable and at times upsetting.

Whether you're already vegan or vegetarian and want to convince your family to forgo turkey, or are simply an omnivore open to opting out of eating animals this Thanksgiving, here are some facts about turkeys that might help you see just what adorable, sentient animals they really are.

Turkeys Love To Be Petted — And They Even Purr

For my birthday last year, I went to Catskill Animal Sanctuary in New York and got to have the chance to meet a turkey. He had escaped from a small slaughterhouse in New York City, so you would think this would be one mean, cynical bird. Not so. They told me this guy would gently peck at your feet until someone picked him up, because all he wanted was to be held. Once someone did, he actually started purring, like a cat. It was so clear this animal loved humans and affection; the fact that over 45 million turkeys like him will be killed this Thanksgiving alone breaks my heart. I mean, if you can experience that kind of pleasure, do you really think you can't experience the inverse pain?

In the wild, turkeys would happily spend their days caring for their babies, building nests, foraging for food, grooming, and even hanging out in trees. As we'll see below, their life on a farm is anything but that idyllic.

Farmed Turkeys Never Get To Meet Their Mothers

When they are born on commercial farms, turkeys are hatched in incubators and crammed into warehouses with thousands of other motherless chicks — they never even get to have a mother, and they are understandably very confused by it. The video above shows how, if given the chance, a baby chick will immediately try to bond with whoever is around when it hatches (even if it is a human). Just like all babies, they need love.

Turkeys Are Actually Way Smarter Than We Give Them Credit For

"The term 'bird brain' couldn’t be further from the truth," Solomon tells Bustle. "Turkeys have a complex vocabulary of gobbles, clucks, putts, yelps, and whistles. They have personality, character, and a keen awareness of their surroundings."

In fact, The Atlantic article “Consider the Turkey” points out that in the wild, turkeys also have a crazy-good sense of direction. "Wild turkeys return to the exact location of a baiting station an entire year after feeding. They scratch and sniff and circle the exact spot for that unforgettable free lunch even though the trough has been moved. Animal behaviorists agree that this return is notable. The Humane Society rightly characterizes it as 'evidence of hitherto unappreciated intelligence.'" I don't know about you, but I can barely get around with GPS.

Erik Marcus, the author of Vegan: The New Ethics of Eating , has spent a lot of time with turkeys on farm sanctuaries and writes that, “Turkeys remember your face and they will sit closer to you with each day you revisit. Come back day after day and, before long, a few birds will pick you out as their favorite and they will come running up to you whenever you arrive. It’s definitely a matter of the birds choosing you rather than of you choosing the birds. Different birds choose different people.”

Like I mentioned about the turkey I hung out with at the Catskill Animal Sanctuary, all he wanted was to hang out with people and be petted, just like a dog. Watch the video above about one Farm Sanctuary turkey's bond with humans, and see if you don't cry some happy tears.

Turkeys Suffer Immensely Before They Are Killed

Make no mistake — on a commercial farm, there simply is no way to produce at scale while giving turkeys a "happy life." "On factory farms, they are treated as mere meat-producing machines. Mercy For Animals has documented turkeys being punched, kicked, and scalded alive on factory farms," Solomon tells Bustle. "All for Thanksgiving dinner."

Indeed, the suffering incurred by turkeys is immense — I won't go into full graphic detail here, but you can read all about what actually happens here. Suffice it to say they live in cramped, filthy conditions, babies are born without mothers, and all turkeys die a premature, painful death.

All "free-range" means is that the turkeys had occasional access to the outdoors. Free-range turkeys still suffer overcrowded conditions that make it nearly impossible to move. Commercial farms are so unhygienic that there is a pre-slaughter mortality rate of 7-10 percent, or between 20 and 26 million turkeys every year in the U.S. alone.

You might feel better buying a turkey labeled "free-range," but, as Solomon puts it, "Free-range or not, all turkeys will meet the same violent death."

They Anticipate Death And Can Have An Empathetic Heart Attack

If turkeys can bond to humans, it's no surprise they bond to their fellow turkeys. The Atlantic article points out that when a turkey is removed from its flock, it will squawk until it's reunited with its posse. In fact, a turkey will "mourn the death of a flock member and so acutely anticipate pain that domestic breeds have had epidemical heart attacks after watching their feathered mates take that fatal step towards Thanksgiving dinner. They clearly feel and appear to understand pain."

Even sadder, according to The Washington Post, nearly one million chickens and turkeys are unintentionally boiled alive every year in U.S. slaughterhouses because production lines move so fast that they often fail to kill the birds before they are dropped into the boiling tank.

It's Not Even Good For You

This is really a whole other article, but it's worth mentioning that just because turkey is poultry, that doesn't mean it's good for you (or the earth). So-called "white meat" might be less damaging to your body than red meat, but it still increases your risk of heart disease, cancer, diabetes, food poisoning, antibiotic resistance, and premature death. Why not skip it altogether in favor of equally delicious, healthier vegan Thanksgiving foods? You'll even have more room for pie.

Not Eating Turkey on Thanksgiving Can Make A Difference

You might think something like, Well, it's already dead anyway, right? But by choosing not to participate in this system, you are essentially boycotting it on both a symbolic and market level. If people continue eating fewer and fewer animals (as they are), demand will decrease, which means fewer animals will be bred only to live a life of captivity and suffering.

If you find the origins of Thanksgiving problematic — celebrating a discovery that eventually led to Native American genocide and environmental destruction — why create further suffering and environmental harm in the world? "By skipping turkey on Thanksgiving you are taking a stand against needless cruelty and violence," Solomon says. "Now that’s something to be grateful for."