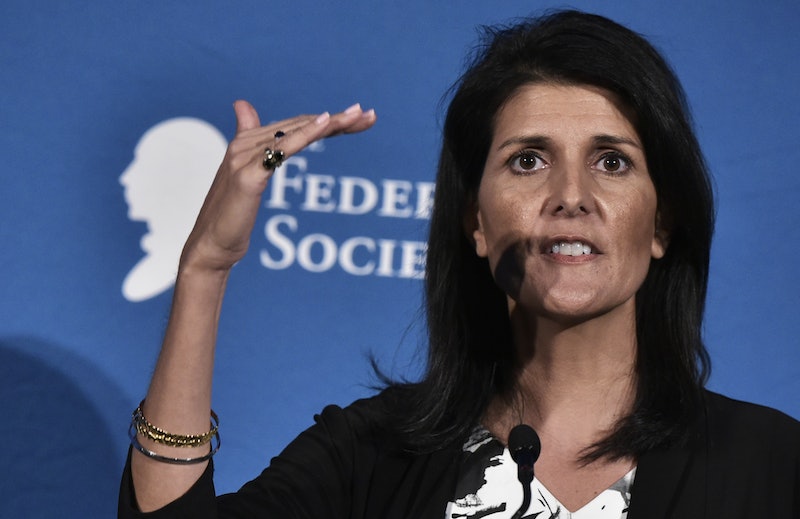 After appointing a Washington, D.C. power player, Reince Priebus, and arguably the ultimate promoter of the alt-right, Steve Bannon, Donald Trump has decided to widen the circle. Reports from Charleston's The Post and Courier point to South Carolina Gov. Nikki Haley being appointed Trump's U.S. ambassador to the UN. The choice is expected to be announced Wednesday after Haley met with Trump last week. Having served as governor for nearly five years, this would be Haley's first post at a federal level and her first foray into international diplomacy. So what would Haley do as UN ambassador? Update: In an official email from Trump's transition team Wednesday, the campaign announced that Trump plans to nominate Haley for the role. Haley formally accepted the offer Wednesday morning.

That will in part depend on the goals of the Trump administration. The job of the ambassador to the UN is to be the United States' voice at the UN in New York City. There, the ambassador meets with permanent representatives from the other 192 member countries to debate all sorts of global issues; Haley's job will be to make sure U.S. interests are protected. She can do that by trying to influence the UN budget, pushing for Security Council resolutions, and even blocking the appointment of a secretary-general (something that will be an issue this year). She also needs to keep the State Department informed of what she's up to, as they carry out diplomacy around the world.

That could all prove a tall order for Haley. As governor she has conducted several overseas trips, but they have all been trade missions focusing on boosting South Carolina's economy. She has attended air shows, visited BMW headquarters (the state has their only U.S. factory), and secretly met with Volvo to get them to open up one too. Other issues which normally would take precedence like international peace and security, human rights, and development might require Haley to study up.

The post of U.N. ambassador is usually filled with someone who has State Department experience. Current superstar Samantha Powers moved from the National Security Council into the role. Her predecessor Susan Rice did as well under the Bill Clinton administration. George W. Bush's appointees also had previous State Department or diplomacy experience. The arguably least experienced, John Danforth, had served as a special envoy to the Sudan and achieved peace in the country during his time as UN ambassador.

For Haley to see similar success, she may need to rely on a staff with more experience and knowledge. She has often been seen as a GOP voice of reason — for example she stood up to Trump during the campaign and was able to get the Confederate flag removed from the state capitol building after the Charleston church shooting — but she will need to land on her feet to successfully get her way at the UN. She could end up playing in tandem with former Massachusetts Gov. and GOP presidential candidate Mitt Romney as secretary of state, which would probably bode well for U.S. foreign policy.

She's an unconventional pick but definitely a step in the right direction after the likes of Bannon. Now she'll need to prove it on the job.