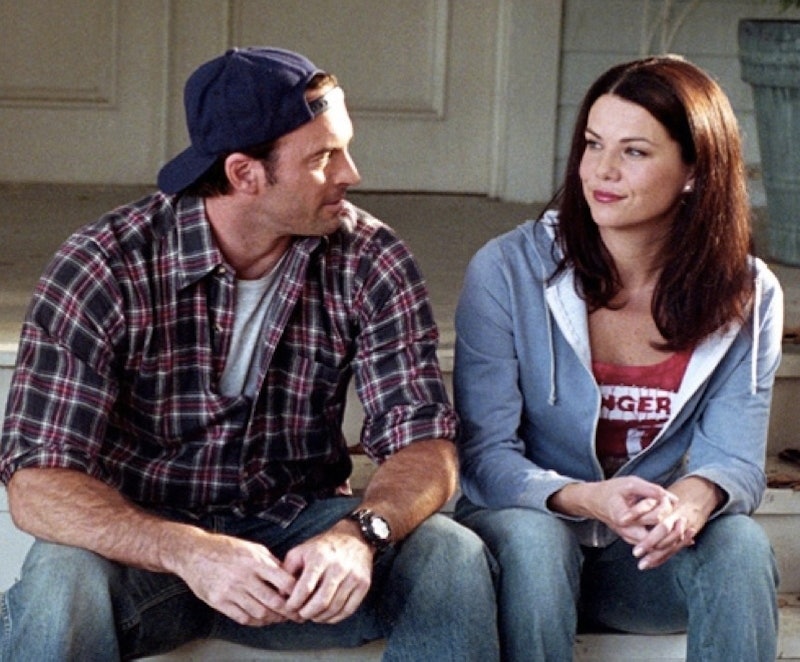 By this time, they've already been stored away in our collective cultural memory as one of those classic TV couples, but, when you really think about it, Gilmore Girls' Lorelai Gilmore and Luke Danes shouldn't have worked as a couple. Somehow they did, and I wouldn't take a single moment of that will-they-won't-they-yes-they-will-oh-thank-god back. But, according to the actors who play them, Lauren Graham and Scott Patterson, the success of the couple all comes down to the writers. If the actors had had their way, Luke and Lorelai would've imploded long before they ever shared their first kiss in Season 4 of Gilmore Girls.

Patterson and Graham sat down with People and Entertainment Weekly recently, for their EW Reunites: Gilmore Girls series, and they shared that, even though things have worked out between the unlikely pair, the most crucial element for them was not chemistry, but time. And it was time that Graham and Patterson were very reluctant to give up. They wanted Luke and Lorelai together straight out of the gate, and were as frustrated as the fans by the snail's pace that the characters' relationship progressed at. As Scott Patterson joked, "Blame it on the writers, because we wanted it right away."

And it's only in retrospect that he can see how the couple taking their time paid off, conceding:

"If you have something that combustable, that incendiary, milk it, just drag it out as long as you can because that’s the soul of drama. That kind of concentrated tension? You can stretch that out for a while and she [Amy Sherman-Palladino] did."

I think the word to notice here is "incendiary," because that's exactly what Luke and Lorelai could have been without the secret ingredient of "taking it super slow." Luke is so grumpy, and Lorelai is so bubbly. If the characters had just jumped into something, either onscreen or in real life, they could have been at each others' throats and burned through a passionate, short-term relationship. They wouldn't yet have the foundation of trust they needed in order to work through those moments where every couple clashes. But they stayed the course, and they built that foundation. According to Graham, that's a secret to Luke and Lorelai's success.

"His gruffness brings out her, sort of, flirtatiousness. There’s a chemistry there. Over time they really connect. They need each other as balance; she lightens him up and he roots her a little bit, but it took a while to get there."

I mean yeah, you're telling me. I barely have the patience in my own life to wait for a latte to cool down before burning my tongue on it, so it's insane to me that I waited through four full seasons of Gilmore Girls before being rewarded with a Luke and Lorelai smooch. (Not that there weren't other things to keep my attention, but you get what I'm saying.)

But at the end of the day, all that patience paid off, because now Luke and Lorelai are a rock-solid couple, secure in their partnership and love for each other. Now, I can use them as inspiration in my own life. Sometimes, the more you want to jump into something with both feet, the more important it is, and the more time and care it warrants. Thanks for the lesson, Gilmore Girls. Let's reconvene in four years to see if I took it to heart.