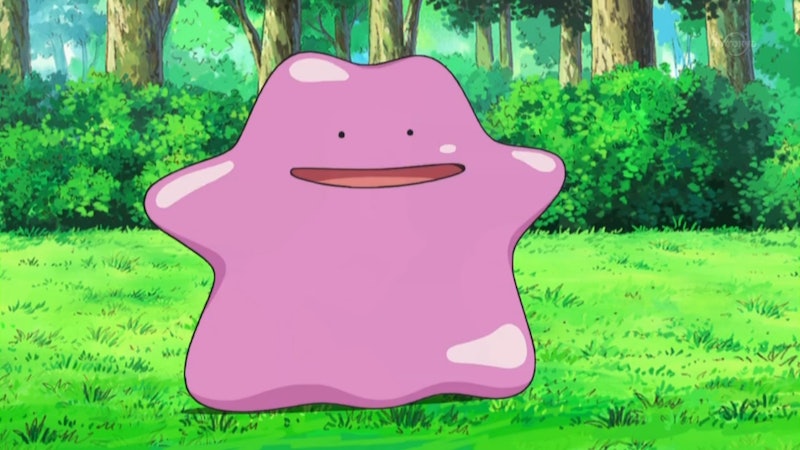 Just in time for a weekend at home with your family, "Pokemon Go" is releasing all kinds of new perks to make the game exciting again — for example, a fan favorite Pokemon has finally joined the Pokedex: The shapeshifting Ditto. This means that everyone who has been wondering how to catch a Ditto in "Pokemon Go" for the past few month will finally have an answer to their most burning of questions. What a way to celebrate the holidays, am I right?

For those who aren't familiar, Ditto is an adorable, squishy looking Pokemon character. Although it's one of the original 151 Pokemon, it hasn't hitherto been available in "Pokemon Go" — so naturally, longtime fans are currently jumping for joy about the augmented reality game's most recent update.

Other than being absolutely precious, Ditto's main characteristic is its ability to transform in battle. For example, if Ditto is battling a Pikachu, it has the ability to "transform" into the Pikachu and take on the Pikachu's shape and traits. It's a handy Pokemon to have up your sleeve — although it's not without its weaknesses: As the official Pokedex notes, "if it tries to transform itself into something by relying on its memory, this Pokemon manages to get details wrong." Oops.

So where have they been since the game launched this summer? And when will a million of these precious creatures exist IRL so we can take them home and cuddle them into infinity?

As Greg Kumparak points out at TechCrunch, it's possible Ditto was simply a little too tricky to program into the game initially, what with the necessity of it "transforming" on your screen; if this is in fact the case, it would make sense that the developers would want to wait until they had perfected it before adding it into the game.

The real question, though, is how you get your hands — er, thumbs — on a beloved Ditto. And the answer is simple, if not immediate: Basically, you keep catching Pokemon that are not Ditto and... you wait.

Yes, that's right: According to Gavia Baker-Whitelaw at The Daily Dot, you can capture a Ditto by capturing other Pokemon and waiting for them to transform. Because Dittos transform themselves in the wild, it's not likely you'll actually see one as their regular Ditto self as you're picking through Pokemon characters to capture. Instead, you're likely to find yourself capturing a Pidgey or Rattata and then discover you have a Ditto once you've caught it.

People are still on the look-out for hacks and tips to determine the best way to capture a Ditto, but as of right now, it seems like you only get them through a good bit of trial and error. According to Mashable, it appears that you can capture Ditto worldwide, as sightings have appeared all across the globe. So, be on the look out and don't bypass every Pidgey you see. After all, you never know what lies beneath.