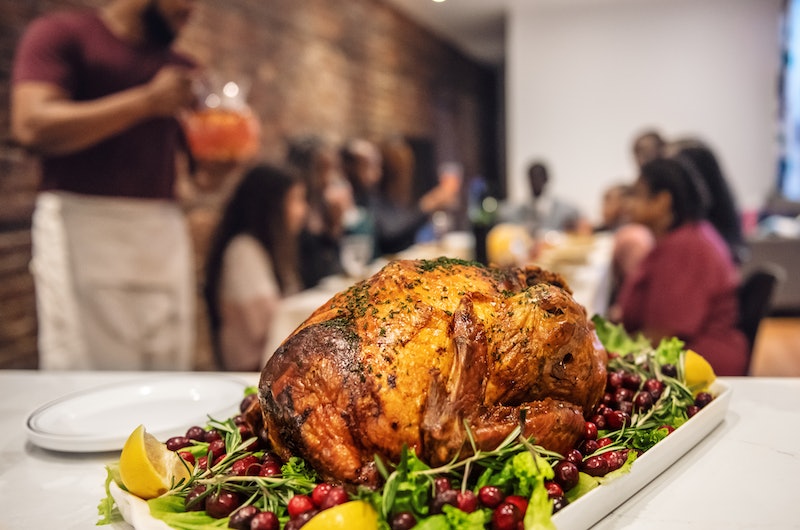 If there's anything we all know to be true, it's the need for the traditional post-Thanksgiving dinner nap. You know, because eating turkey makes you tired. Or at least, that's how the myth goes. But have you ever stopped to wonder what, exactly, about turkey makes you tired after eating it? This association doesn't tend to exist with other meats, like chicken or steak, or even other foods in general — so what's the deal with turkey?

To be fair, there are plenty of associations we have between food and how they impact our bodies after we consume them — or example, that sugar makes us hyper or that coffee makes us energized. But when it comes to diving into that turkey on Thanksgiving, it's worth pausing to wonder: Is there any truth to the notion that something in this roasted bird is actually making me sleepy, or is it all the placebo effect?

According to science, it's a little bit of both. As Tanya Lewis explains at Live Science, it is true that turkey contains an amino acid called "tryptophan" which forms the basis of brain chemicals that make people tired. "Tryptophan," Lewis explains, "is a component of the brain chemical serotonin, which gets converted into the well-known sleep-inducing hormone melatonin." So the idea that turkey has a chemical disposition to make you feel tired has a foundation in truth.

But, as with most things in life, there is more to this story:

As Wired discusses in this recent video, there are many components of your typical Thanksgiving meal that make you feel tired after eating. That's right: It's not all the fault of the turkey. Wired notes that eating turkey alongside carbohydrates, such as your usual potatoes, stuffing, dinner rolls, and even desserts, is what really does most people in when they find themselves craving a post-dinner nap.

Tanya Lewis explains this as well; according to her, "consuming carbs triggers the release of insulin, which removes most amino acids from the blood, but not tryptophan — that dearth of competitors allows tryptophan to enter the brain and form serotonin and, ultimately, melatonin."

Other factors are at play here, too. For example, think of how much wine you might drink at Thanksgiving dinner. Now think about if you were drinking a bit while cooking or setting the table. And that post-dinner drink right before you curl up to nap on the couch? Yeah, alcohol still counts, even on the holidays. If a few glasses of your drink of choice makes you tired on a normal day, it's going to make an impact during Thanksgiving, too.

Another key factor that people often overlook is that your body needs time to digest food, so by virtue of having a large meal, it's going to need to slow down. That's right: Digesting food takes energy from your body. According to Daniel Viktor at The New York Times, simply eating a lot of food can make you feel tired, no matter what's in it. Of course what you eat and however much you eat is OK; your choices for yourself are always valid, and no one else should be commenting on them. Whatever those choices are, just know that it's also totally normal for your body to want some time afterwards to process and digest it, without it necessarily being the fault of the turkey.

Dig in, everybody — and prepare for the napping to commence!