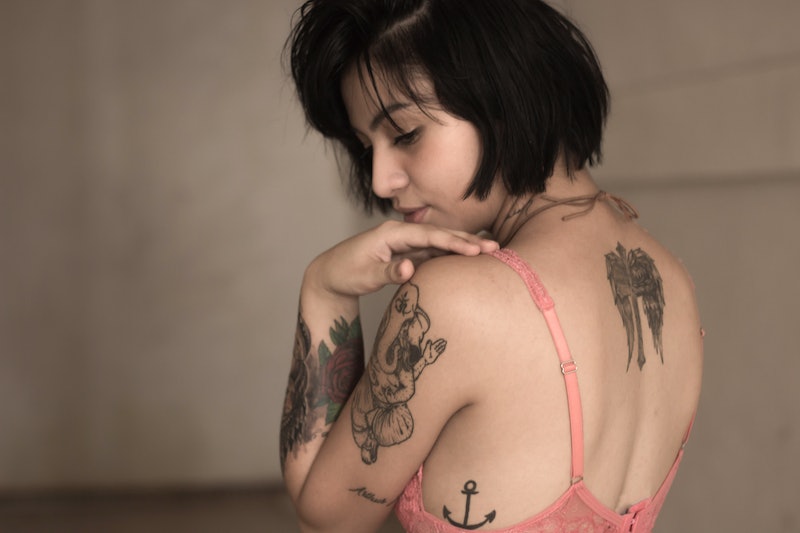 When contemplating your next piece of ink, your initial thought might not be, "Are tattoos vegan?" But, if you're an animal lover or an herbivorous human, you'll likely be very interested in finding out the answer.

The reality is, nowadays animal derived ingredients appear to be in almost everything. As consumers, we're becoming increasingly aware of what goes into the products we buy, and the internet makes it much easier to directly contact companies to ask all of the nitty gritty questions you want to know the answers to. For instance, did you know that some condoms contain casein, which is made from milk? There are tons of other weird uses for animal derived ingredients, across a range of products from beauty to furnishings, and many more. If you're a vegan, you're likely already used to checking the ingredients on packages before you buy something.

So what about tattoos? You might wonder how they could possibly not be vegan, considering they're created with basically just a needle and ink. But, you may have heard how, historically, some tattoo artists practiced inking on pig skin — and in recent years, some people have tattooed live pigs — which is obviously not good news for vegans, animal lovers, or pigs. However, nowadays artists can practice on synthetic skin that's shaped into limbs, which is a step forward in terms of animal rights.

I caught up with tattoo artist Ryan Henry, owner of 9Mag Tattoo Studio and star of VH1's Black Ink Crew Chicago , to find a definitive answer on the topic of vegan tattoos. In an email to Bustle, Henry says, "Not all tattoos are vegan," he explains, "some tattoo inks are made with animal products such as glycerin from animal fat."

With that in mind, it would appear that if you're tatted with an ink that contains glycerin, you are literally needling animal fat into your skin. As a vegan myself, I'm sure I can vouch for vegans worldwide when I conclude that this is certainly not what any vegan would want.

People for the Ethical Treatment of Animals (PETA) informs readers of the ins and outs of vegan tattoos and tattoo ink on their website. According to PETA, "Nonvegan varieties may contain bone char, glycerin from animal fat, gelatin from hooves, or shellac from beetles. So as you’re checking out tattoo shops, ask if they use vegan inks or if they can order some for you. Some great vegan brands include Eternal, StarBrite, SkinCandy, and Stable Color."

Another important tip to remember from PETA is to take your own razor to your ink session, because "...the ones they have in-house may have a gel strip made from glycerin."

He recommends some vegan products to VegNews readers, "The Merry Hempsters makes a Vegan Tattoo Soft Salve that uses organic herbs and hemp butter to keep your skin moisturized and soft. Ohana Organics also makes a shea-based tattoo butter with aloe, calendula, and lavender to soothe and heal."

So remember to ask your tattoo artist about the ingredients in your ink, go equipped with your own vegan-friendly razor, and use vegan aftercare products. Failing that, hunt for your nearest vegan tattoo parlor instead to ensure that your tattoo is totally cruelty-free, so you can get inked with a clear conscience!

More like this
Most Comfortable Underwear For Big Butts
By Audrey Williams
Meet Foreverist, The Skin Care Brand That Keeps Tattoos Looking Fresh
By Audrey Noble
20 Thumb Tattoo Designs That'll Make You Want More Ink
By Paris Giles
Kendall Jenner's Cowboy Boot Tattoo Is The Cutest Micro-Ink
By Sophia Moore
Get Even More From Bustle — Sign Up For The Newsletter