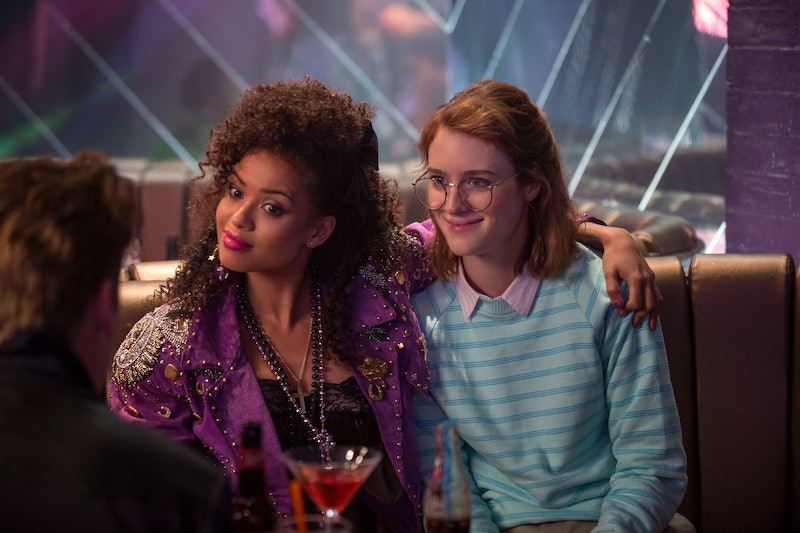 In the increasingly fraught times that we currently live in, the Black Mirror episode "San Junipero" provided a hopeful and comforting glimpse that heaven truly could be a place on earth. And if you found yourself toe tapping, seat dancing, and gleefully shimmying your way through the episode thanks to the non-stop amazing music that was featured on it, then you'll be delighted to know that an official soundtrack for the "San Junipero" episode of Black Mirror is being released — so now heaven can be a place in your stereo, too.

Due for release on Dec. 2, the soundtrack is set to feature the original score from the uplifting Black Mirror episode. It was created by composer Clint Mansell (known for composing the iconic Requiem For A Dream score). And suffice to say, it's likely to make you feel as though you're falling in love right across the '80s, '90s and '00s.

Both the gorgeously whimsical original score and compilation of classic songs, which made for evocative music, were central parts of what made "San Junipero" such a striking episode. In a story in which two love-struck strangers are revisiting their youth and celebrating life across specific moments in time, music wasn't just used as an indicator of time, but also as a vital storytelling tool.

Featuring tracks with names like, "Tick Tock (Clock Of My Heart)," "Endless Summer," and "San Junipero (Saturday Night In the City Of The Dead)," Mansell's original score was perfect in expressing the restless dreaminess, romanticism, and intrigue of the episode, and of San Junipero as a concept in itself. His score was utopian yet nostalgic, wholly embodying the love story between Kelly and Yorkie as they discovered a future together, while metaphysically stepping backwards in time.

Though there's currently no plans to release an official soundtrack of all the classic songs featured in the episode, there is thankfully a Spotify playlist for "San Junipero" which does. Put together by Black Mirror creator Charlie Brooker, the 42 song playlist features "tracks which didn’t make it in (for rights/other reasons)” as well as ones which simply "inspired elements of the story." Speaking to Vogue, Brooker further explained his inspiration for the music featured in "San Junipero" and stated,

"So 1987 — I think I would have been about 16 — it felt like a really good era to anchor it in. It was shiny, it’s aspirational, and it just felt like the perfect place to revive this sort of simulation, with this heightened, movie-fied version of 1987. And then there’s huge nostalgia for me. All the music I said I hated, I secretly loved all of it; T’Pau and all of that. It was a great way for me to indulge in all those guilty pleasures. To go back and revisit all of that music people claimed to hate in 1987."

Which is a heartwarming idea to consider, particularly in regards to the central premise of the story. Because here we have San Junipero, a place where the consciousness of the dead is uploaded to live out a virtual existence — and it's a place without judgement and where a person's true self, perhaps oppressed in the living, is allowed to be explored and celebrated in this afterlife. What better time to indulge and embrace every facet of your personality and pursue all pleasures, even the guilty ones, than in the freedom of an afterlife?

And as a result, the episode gleefully finds its heart within pop songs that many have likely written off over time as being too corny to be taken seriously. Except within the context of San Junipero, songs like "Walk Like An Egyptian" by The Bangles, "Cant Get You Out Of My Head" by Kylie Minogue, and "Funkytown" by Lipps, Inc. all take on a new and powerful significance as the musical beats of our lead characters' romance.

Belinda Carlisle's "Heaven Is A Place On Earth," a song which arguably forms the crux of the finale, is even transformed from a cheesy, '80s pop hit to providing the musical foundations of a truly emotional climax. Songs which have formerly been considered as music at its most frothy and perfunctory are given weight in the episode. They become representative of exuberance, freedom, youth, and even, love itself.

Both Mansell's dreamy original score and the classic pop songs which fill the gaps in between are, like the central love story of the episode, unapologetic in their optimism and positivity. Like the characters that exist within it, the music of "San Junipero" provides pleasure without any guilt or judgement. They're songs which, within the context of the overall piece, proclaim love, joy, fun, adventure, and fulfillment in their absolute purest.

And when it comes to nostalgia, the likes of which "San Junipero" delivers in its most literal and tangible form, music is a powerful tool in evoking specific feelings in a direct, immutable way. And the genius of the episode is that its soundtrack also manages to perfectly achieve this too.