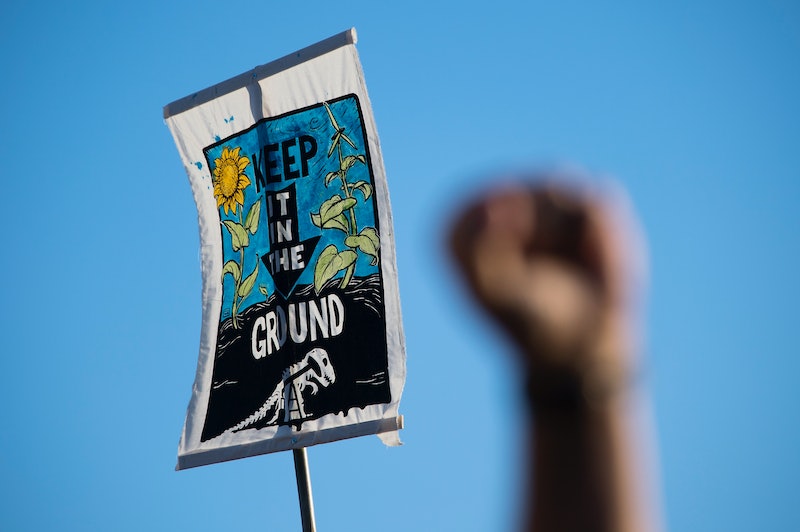 Seven months after the Standing Rock Sioux Nation set up the Sacred Stone Camp, protests against the construction of the Dakota Access Pipeline show little sign of tapering off despite the new challenges winter's arrival brings. So, what's happening at Standing Rock now?

More than 400 people have been arrested in protests against the planned construction of the Dakota Access Pipeline in Standing Rock, North Dakota, as tensions between law enforcement and protesters continue to mount. In the last seven months, law enforcement officials in Standing Rock have responded to protesters — who call themselves water protectors — with tear gas, water cannons, rubber bullets, and sound weapons. Most recently authorities fired water cannons on roughly 400 protesters who'd gathered on Backwater Bridge on Nov. 20, a night when temperatures sunk to around 20 degrees Fahrenheit.

While the use of water cannons during in below freezing weather conditions was heavily condemned by groups sympathetic to the activists' cause, the Morton County Sheriff's Department claimed they were responding to "an ongoing riot" and that protesters had "started a dozen fires near the bridge" in a statement released Nov. 20. The Standing Rock Medic & Healer Council called for "the immediate cessation of use of water cannons" given the low temperatures. "As medical professionals, we are concerned for the real risk of loss of life due to severe hypothermia under these conditions," a statement from the group said.

Continued clashes between police and protesters have drawn the attention of high-profile celebrities and international groups, including Amnesty International and the United Nations' special rapporteur on the rights of freedom of association and peaceful assembly. Amnesty International announced it would send "a delegation of observers" to North Dakota to monitor how law enforcement authorities were handling protests following a violent confrontation that saw at least 142 people arrested Oct. 28. UN Special Rapporteur Maina Kiai accused law enforcement of "using excessive force" against protesters in a statement released Nov. 15. He also voiced concerns about the scale of arrests being made and characterizing the detention conditions as "inhuman and degrading."

While the increasing confrontations between NODAPL protesters and law stand to become increasingly more dangerous as winter brings tougher conditions to those living in the Sacred Stone Camp, the Dakota Access Pipeline has long been considered a controversial project to both the Standing Rock Sioux Nation and enviornmental activists.

Initial plans for the 1,172- mile pipeline, which will carry oil from North Dakota to Illinois, had it crossing the Missouri River roughly 10 miles north of Bismarck, according to the Bismark Tribune. That plan was rejected by the U.S. Army Corps of Engineers, however, due to (among other things) concerns over the pipeline's potential to threat to municipal water supply.

Plans for the pipeline now have it crossing the river at Lake Oahe, less than a mile from the Standing Rock Reservation, sparking concerns among tribe members that the pipeline may threaten the Standing Rock Sioux nation's main water supply. Energy Transfer Partners, the company constructing the pipeline, does not yet have the required permit to drill under the Lake Oahe as the land is owned by the federal government.

While Energy Transfer Partners has claimed construction delays have already cost them $100 million dollars, the U.S. Army Corps of Engineers announced Nov. 14 it would continue to delay construction of the pipeline on its land. The agency said it needed to conduct "additional discussion and analysis" and invited the Standing Rock Sioux Tribe to engage in discussion of the project with them.

Energy Transfer Partners asked a federal judge to immediately approve construction on federal land shortly after the Army Corps of Engineers' announcement. "Dakota Access Pipeline has waited long enough to complete this pipeline," CEO Kelcy Warren said in a statement. "It is time for the Courts to end this political interference and remove whatever legal cloud that may exist over the right-of-way beneath federal land at Lake Oahe."

According to NBC News, the company has reportedly said they are optimistic about what a Trump presidency will mean for the pipeline's construction. President-elect Donald Trump is an investor in Energy Transfer Partners and could thus benefit financially from the project's completions.

While much of America gathers around tables to give thanks this Thanksgiving, many Native American communities recognize the holiday not as a day for feasting but as a day for mourning given how steeped in the genocide of indigenous peoples America's founding is. The them the Dakota Access Pipeline is proof the struggle to resist the colonization of their land has never ended.