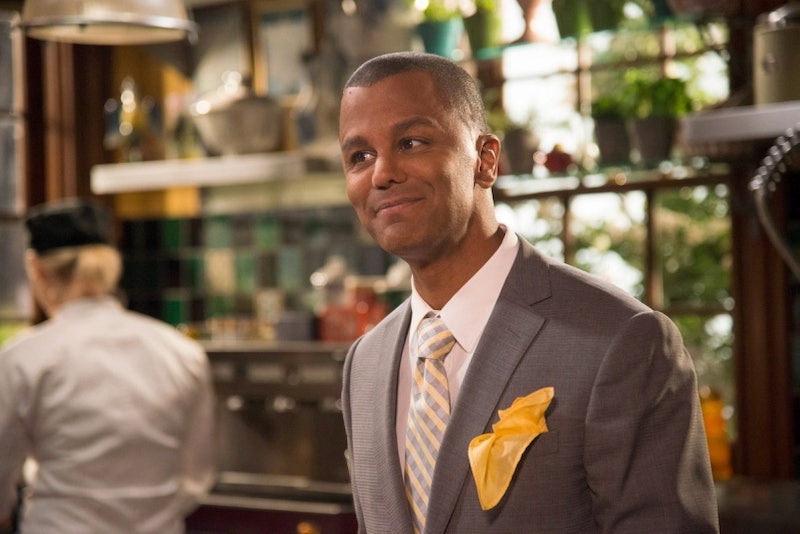 Suffice to say, since watching Gilmore Girls: A Year in the Life in its entirety the second it was made available to stream, I've been a frenzied bundle of emotions. I laughed, cried, cheered, jeered, and gasped my way through all six delightful hours of the Netflix mini-series. And one aspect of A Year In The Life which launched me off my chair with joy was the discovery that Michel has a husband in the Gilmore Girls revival. Because, finally, Michel gets to be happy and enjoy what sounds like a stable and fulfilling romantic relationship. Though the revelation that Michel is in a gay relationship in A Year in the Life is one definitely worth celebrating, I'm also eager to applaud the manner with which his character arc was approached.

Fans might not see Michel's husband in the Gilmore Girls revival, but his positive influence on the character is truly heartwarming to witness. Because as fans know and love, Michel is the resident curmudgeon of The Dragonfly Inn. His acerbic wit and irreverent disdain for everyone and everything bar his mother, his Chow puppies, and the superb work of Destiny's Child was a strong, comedic force within the original episodes of the series. And though the character certainly still maintains his frustrated snarl and wicked tongue in the revival, Michel also possesses far more warmth and progression than in the past. And Frederick, his unseen husband, seems to be responsible for that.

Looking back at the original seven season run of Gilmore Girls, it feels almost impossible to seriously imagine Michel happily accepting the idea of starting a family with someone. Michel, like many of us who simply aren't blessed with a maternal or paternal instinct, faced numerous personal struggles when it came to understanding or caring for children. The sight of a miserable Michel being forced to care for the children of guests at the inn always made for entertaining viewing, but it also highlighted how truly awkward he is around kids.

But that's not to say that his awkwardness was due to him hating children or even being against the idea of raising his own someday. Because as his love for his precious Chow puppies proved, he was clearly always capable of loving and nurturing something, even if that was only some dogs to begin with. And in an episode in which he offers to babysit Sookie and Jackson's first child, Davey, you see the initial spark of a man who likely wants to have kids someday, but just doesn't have the first idea of how to take care of them.

Not only does Michel lose baby Davey under a bed after playing a made-up game of "baby crepe" with him (wherein he rolled the baby back and forth in a blanket to stop him from crying), but he also continuously refers to Davey as "it" and has to call Lorelai to help him.

When she turns up, he isn't curt or disparaging toward the child as he is toward the ones at the inn, but is genuinely upset that he may have failed in caring for Davey. And this is what makes Frederick's relationship with Michel all the more endearing, as Michel strives to correct his manner with children in order to make his husband happy. But clearly, it's also for his own fulfillment too.

Part of the brilliance, then, of not showing Michel's husband in A Year In The Life is that it allows the show to maintain the facade of Michel's prickly persona. It's easy to imagine the character, for instance, being sweet, patient, and mercilessly positive with his husband, even if that's not how he is to the characters on-screen. You get to still enjoy the precocious, continually frustrated day-to-day antics of Michel, but there's also a hint that his behavior is little more than showy, pessimistic bravado and that he's seriously happy deep down.

This side of him is blatantly evident in the way that he strives to be playful and caring towards the child guests of The Dragonfly Inn by offering them lollipops at check-in (even if he does joke to Lorelai afterwards that his attempts make him sound like a "child molester"). Frederick may be unseen in this instance, but audiences can still recognize his influence on Michel, in clearly pushing him out of his comfort zone and gaining some well deserved confidence.

And that doesn't just play out in Michel pursuing his opportunity to raise a family with someone that he loves, but also in encouraging him to be the best person he possibly can be. Even if that means having to leave The Dragonfly Inn to pursue his dream career and be the husband and father that he wants to be.

The audience doesn't need to see Frederick to understand this. Instead, they experience the relationship through the slight changes in Michel, his priorities and his general view of life. Frederick's lack of screen presence also goes some way in acknowledging that even the most subtle of queer representation can be incredibly satisfying.

While fans may never meet Frederick and they (thankfully) aren't patronized by the show in hearing Michel provide a speech explaining his sexuality to the audience, they experience a celebration of queer identity, regardless. Viewers witness a celebration at its simplest and purest — in the positive, joyful, encouraging, and confidence-boosting impact the marriage has on Michel. He's still the same man he always was (and just as offhand and cruel as he could be), except as A Year In The Life appears to prove, he's finally found happiness.