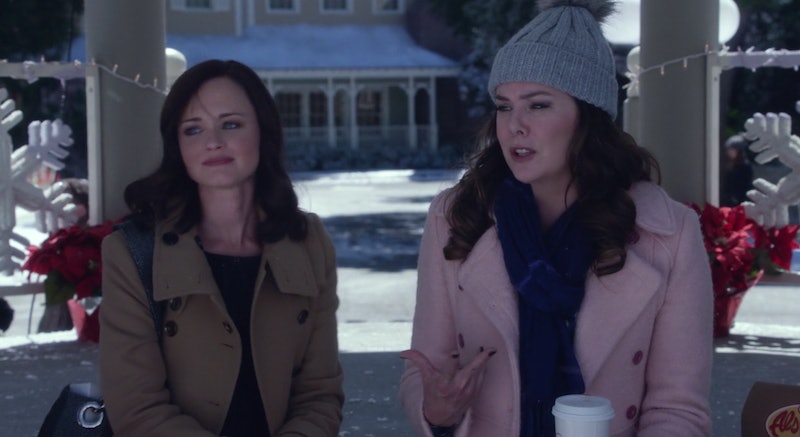 If you've already marathoned the Gilmore Girls revival, you'll have discovered the obvious: There have been some significant changes to the beloved Connecticut-based town. Namely, Stars Hollow in 2016 looks way more like a contemporary American town. If you'll loop back to the show's first year, 2000, you'll remember the most distinctive quality about Stars Hollow was its weirdly anachronistic vibe. It didn't really feel like an American town in the '00s. There were extremely limited mentions of the internet, even towards the end of the series in 2007 when Rory did most of her journalism on a computer. None of the characters were openly gay and the show's apparent attitude to characters of different ethnicities was problematic, to say the least.

Given Gilmore Girls' fans adoration of the show's twee dynamic, I wasn't necessarily expecting any great changes on this front when I returned to the show on Friday. But, boy, was I pleasantly surprised. The show seemed to anticipate my prejudices about Stars Hollow by throwing a curveball: The revival opens on Rory experiencing a technological problem which we've never seen before in Stars Hollow. Somehow, the phone networks have such poor coverage of Stars Hollow that she has to run from street corner to corner, trying to get reception. Is this town actually getting more backwards in terms of technology and progress?

But it seems pointed that on running into Doose's, where she finally gets reception, viewers encounter a sign that Stars Hollow is in fact a totally normal town in 2016: ethnically diverse citizens.

I hate to make a huge deal out of this, but do you remember how incredibly white the Stars Hollow population of 2000-2007 was? Here are a few screencaps to jog your memory:

Don't get me wrong, the crowd at the town meeting in the first screencap definitely isn't completely white, but it's still a little weird, right? Still — this isn't necessarily about sinister intent. The town Stars Hollow is based on, Washington Depot, according to a New York Times report in 2003, reportedly lacked ethnic diversity and was, at least then, almost entirely white — "96 percent according to the last census." So this could have been Gilmore Girls showrunner Amy Sherman-Palladino just working off her memories of the place. However, according to the same article, it has "a lively gay scene," which was another thing that was totally absent from the original series, where Michel's sexuality was glossed over.

So hallelujah for Michel's opening monologue in Gilmore Girls: A Year In The Life , which lays the matter to rest: He's married to a man. In the episode "Spring," in a town meeting, Taylor Doose broaches the issue of the town gay parade. He argues that since the town only has one lesbian couple and one other gay male resident, they lack the numbers for a parade. Gypsy challenges him: "Really, Taylor?"

He really can't think of anyone else? She stares at him, trying to elicit a lightbulb moment, but: "No." This made me chuckle and I guess was potentially a sly hint that perhaps the town has far more citizens who identify as gay than those who have submitted themselves for the parade. Sure — Stars Hollow doesn't exactly seem to have a huge, vibrant gay community, but it's at least allowing the possibility of gay characters now.

Which brings us to Luke's, the diner where modernity goes to die. 'Twas ever thus — in the original series, Luke took pride in banning customers from using cell phones while in his café. Now he takes pride in banning man buns and the use of wifi. His ban on wifi is slightly sneakier than using signs, however.

When his customers ask for his wifi password, Luke simply invents a new one each time. What does this mean? Since Luke is a straight-talker, not given to subterfuge or passive-aggressiveness, I'd argue this is, to some extent, Luke accepting defeat. Modernity is here to stay, customers come to cafés with their laptops and if he had an argument each time, he wouldn't have time to get his work done. Besides which, this doesn't seem like a completely reluctant submission to modernity — after all, Luke didn't have to have a wifi connection and life would certainly be simpler if he could state he just didn't have internet. If even Luke needs an internet connection at home, Stars Hollow must have changed.

And then there's one more enormous change that rectifies the fantasy world of the original: Stars Hollow has a bar. Sure, it's a secret bar that Taylor doesn't know about and the patrons have to hide their tables, chairs, drinks, and selves every time he walks past — but finally, Stars Hollow has the potential to have nightlife. This is everything. The fact that we saw Lorelai enjoy a drink outside of the safe environs of Emily Gilmore's home maybe a handful of times over seven seasons felt unrealistic. She was a 32-year-old woman, who, despite her stressful job, still seemed to like hanging out with her friends. Why wasn't there anywhere for her and Sookie to get a glass of wine together after work? Maybe Stars Hollow has completely modernized.

But I'm at danger of overstating the changes. Stars Hollow is still largely white and largely straight. They have a newspaper that is still printed and doesn't have any sort of strategy in place for how to distribute its copies. Kirk still maintains the Black, White, and Read movie theater, which despite its customers still bringing their own snacks, still seems to do a brisk enough trade to survive — and this in the age of Netflix and people streaming movies. Even Taylor's attempts to institute civic changes have been an uphill struggle. He installed parking meters but people refused to pay and he's having to campaign hard for sewers as opposed to septic tanks.

This seems to be Sherman-Palladino trying to strike a balance between the more charming sides of Stars Hollows' anachronistic aspects (old-timey printed newspapers, rather than, say, closeted hotel employees, for example) and the reality of 2016: a completely white, straight town with no mention of wifi or phone coverage wouldn't be believable. But then, neither would a multiplex in Stars Hollow. While I still think modernization could have been pushed a lot further, Sherman-Palladino's 2016 Stars Hollow feels like a good compromise.