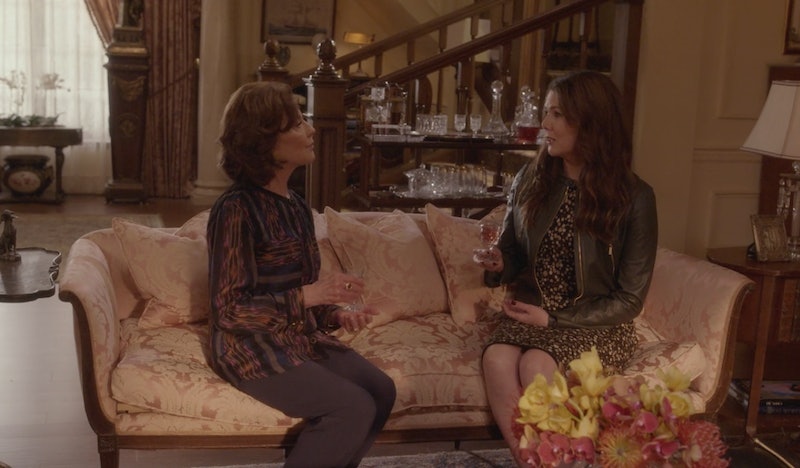 It's no secret that one of the biggest takeaways from the Gilmore Girls revival is that the story has come "full circle." Without getting too spoilery about it, the "full circle" theme is applicable to way more than any one situation, but, perhaps one of the most direct and outward moments of closure in the revival happens when (major spoiler alert!) Lorelai asks Emily for money to expand the Dragonfly Inn. It's a scene that mirrors an iconic one from the pilot, save, sadly, for the presence of Richard. But what was a moment of unease and vulnerability in the pilot turns into a comforting and hopeful scene in the revival.

If you're not as up-to-date on the pilot as I am, let me refresh your memory. After all, it's been 16 whole years since it originally aired. You see, the Friday night dinners at Richard and Emily's house and Rory's Chilton education were all part of a greater design. Before Rory's acceptance to Chilton, Lorelai and her parents were mostly estranged. But, because she couldn't afford to send Rory to the private school on her own, she reached out to her parents for financial help, abundant pride be damned.

In the pilot, Richard and Emily were surprised to even see Lorelai at the house. Richard made a snide remark about it not being Christmas, because that was apparently the only time he normally saw his daughter in the flesh. Lorelai, nerves spilling over, asked Richard to sit down, because she knew she was about to say the very thing that they were expecting of her all along. Richard's first nonchalant reaction to her seat suggestion? “You need money."

From there, Lorelai tried to explain that it was not what they thought it was. "I have a situation," she said. But, Richard cuts her off and once more stated, "You need money." It was an accusation she couldn't deny, no matter how altruistic her intentions. She told them Rory was accepted to Chilton, and Emily pointed out how close the school was to their house. Lorelai responded, saying, "That’s right, it is. She can start as early as Monday. The problem is, that they want me to put down an enrollment fee plus a semester’s tuition and I have to do that immediately or she loses her spot." Richard once again responded knowingly, "You need money."

Lorelai conceded defeat, telling them that she did need the money, but that she'd pay them back fully. Richard remarked about getting his checkbook when Emily said this now-iconic statement to Lorelai:

And, the rest is history. Well, until it isn't. Because, in the revival, when Lorelai goes to Emily for money to expand the inn, they have almost the same exact conversation.

Lorelai asks Emily to sit, and Emily immediately asks her what she needs. Lorelai explains her conundrum with the inn being impossible to expand where she has it now and how she needs to money to get a new place where she can make the business bigger and better and so that Michel will stay. Basically, Lorelai is begging, just like she was before. But, in a far less begrudging and snarky way. Lorelai almost seems... humbled.

And, Emily is far less haughty about it this go around, too. "So, you need money?" she states (repeatedly), but unlike Richard, it isn't arrogant or cavalier. It's oddly understanding. But, like Richard, she announces that she's still going to get her checkbook.

This time, Lorelai gives a stipulation. But, its more of a negotiation. She tells Emily she wants to use Luke's franchise money because he doesn't want to use it, but they could put it to good use for the inn. Rather than shooting her down or protesting, Emily tells her she'll call the lawyer to see what she can do. But, Emily being Emily, she makes this money inquiry conditional, too. She explains,

On one condition… I want you and Luke in Nantucket two weeks every summer and one week at Christmas. If all goes well you’ll be staying in the Blackstone house next-door... If you agree to this, you’ll have the money in the morning. If you don’t, you better figure out a way to get rid of those lizards.

Lorelai laughs and accepts and raises a glass with her mother, and says, "To the circle of life," understanding that all along, all her mother wanted as a "favor" was her daughter's time.

The scene effectively acknowledges how this exact conversation happened 16 years prior, only with an entirely different tone. It's so nice to see the full circle moment, especially with Emily sentimentally pointing out that Lorelai looks happy, with Lorelai finally accepting and announcing that she is, in fact, happy. Aww, those Gilmores.