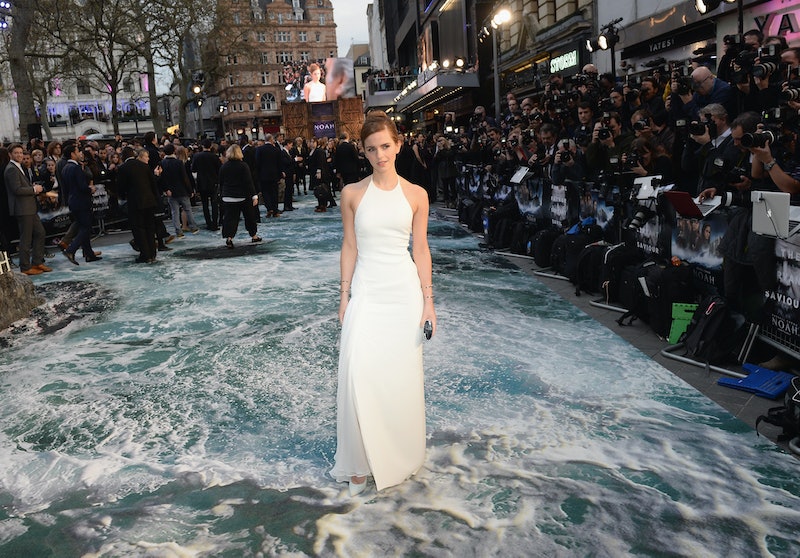 Emma Watson, née Hermione Granger, definitely has a complicated relationship with Hollywood and stardom: she's that rare breed of child stare who's still occupying a lot of the limelight, she exploded into gorgeous adulthood under the public eye, she went to Brown like any other Ivy kid but everybody recognized her. She wears designer clothes and gets her makeup done on the regular, but tries to be "honest" about Hollywood's superficiality (see: Tweeting "I did NOT wake up like this" about her look for the NYC Noah premiere).

Now, in an interview with The Guardian, Watson has criticized the fashion industry for projecting unattainable ideals. Saying that the pressure to look flawless used to upset her more when she was younger, Watson continued, "With airbrushing and digital manipulation, fashion can project an unobtainable image that's dangerously unhealthy. I'm excited about the aging process. I'm more interested in women who aren't perfect."

That's nice, and true, and uplifting, but it's a surface-level criticism with no substance beneath it — a popular sound bite among today's celebrities, but one that rings a little ironic when we, well, see them on the red carpet. Criticizing beauty standards has become too much of a buzzword in itself: Say you hate unrealistic beauty! While looking unrealistically beautiful, thanks to a team of [SPONSORED BY] L'Oréal experts! *teeth sparkle, winks at camera*

Watson may claim to be excited for her first wrinkle, but she gets paid the big bucks for — among other things — cleaning up like this:

At Noah premieres around the world, Watson wore everything from Ralph Lauren Collection to Oscar de la Renta — all that dangerously unhealthy fashion. She looked great. And that's great. But this is Hollywood we're talking about. Though the participants may claim to distrust fashion, may insist they're excited about aging naturally, those aren't Hollywood's rules, no matter what is said in interviews.