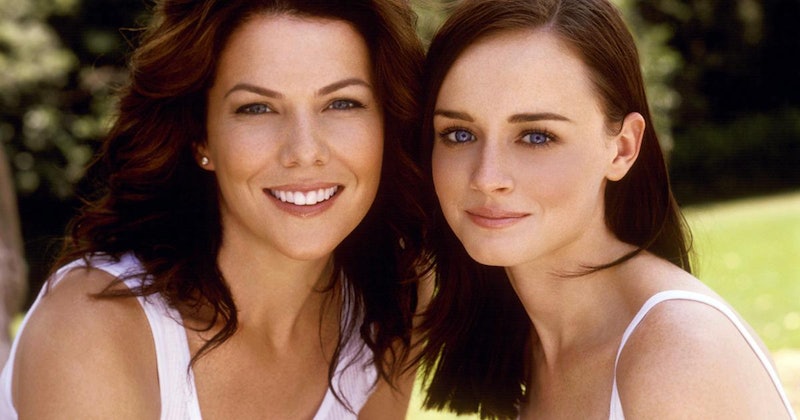 It's an amazing time to be fan of Lorelai and Rory Gilmore: On Black Friday, Netflix released its four-part Gilmore Girls revival, A Year In The Life, and longtime fans finally got to hear those final four words. The Tuesday following, star Lauren Graham's memoir, Talking As Fast As I Can, was released, and the book is filled with Gilmore Girls secrets that even diehard fans will be shocked to discover.

Talking As Fast I Can: From Gilmore Girls to Gilmore Girls and Everything in Between is a collection of personal essays that detail Graham's career, her love life, the challenges she's faced as a woman in entertainment, and all the hilarious stuff that's happened behind-the-cameras and off-the-stage. As evidenced by the title, Gilmore Girls plays a huge role in the book, and Graham drops some major secrets about life on set — both during the series' original run and its revival nearly 10 years later. But the book isn't all about Gilmore Girls, so expect plenty of fascinating stories on Graham's life in Hollywood — everything from her experience judging Project Runway to that time she tried to go vegan to connect with Ellen DeGeneres.

But you're looking for Gilmore Girls secrets, she definitely delivers. Here are the 17 most surprising Gilmore Girls revelations from her new book:

The two co-stars met for the first time in the lobby of a Toronto hotel. "We'd both been cast in the show without ever having met," Graham writes. "...there'd been no time for anyone to even see us standing side by side, just to make sure we looked related... I was overwhelmed, but I could tell I liked her right away."

When Graham was cast in the Gilmore Girls pilot, she was already on another show: M.Y.O.B. She had to wait to find out if M.Y.O.B. was canceled before she could commit herself to Gilmore Girls, which had been picked up for a full season by WB.

The Show Was Originally In The Same Time Slot As Friends

The show originally ran at 8 o'clock on Thursday night, the same time as Friends. "So, on Thursday nights against America's favorite sitcom, we had almost zero chance of finding an audience," Graham writes. Luckily, she was proven wrong, and the show moved to Tuesday nights in the second season.

The first scene they ever filmed is the scene that actually ended up being first in the pilot — the one where some guy tries to pick up both Lorelai and Rory in Luke's Diner. That also happened to be Alexis' first on-camera scene.

Kelly Bishop Told Her To Date That "Wonderful Actor On Six Feet Under."

Years later, Lauren Graham did end up taking her TV mom's advice and dating that wonderful actor: Peter Krause, her co-star on Parenthood.

Lauren Graham's Sister Is Featured In The Chilton Graduation Scene

The girl seated in between Rory and Paris is Maggie, Lauren Graham's sister. And she's not the only one of Graham's family members who made an appearance on the show.

"Over the years, many family members made cameos," Graham writes. "My cousin Tim still talks about his favorite episode: 'The one about the guy carrying flowers through the lobby of the Dragonfly.'" He was the guy carrying the flowers.

"The [fourth] season opens with Lorelai and Rory returning from their backpacking trip through Europe," Lauren Graham writes. "I'm proud yet horrified to tell you that the entire outfit I'm wearing in the first scene — the kelly-green EVERYONE LOVES AN IRISH GIRL T-shirt, the Ireland soccer jacket, and the oversized knit pompom hat with the word DUBLIN on it — were all from my personal closet. I was really hitting the Irish thing hard."

Lauren Graham says she was "extremely dedicated" to the dog.

"I missed my favorite scene partner," she writes. "I'd never played a character for this long, and while it's a bad actor cliché to say 'my character would never do that,' the line between personal and professional starts to get blurry, and after a while you start to feel like what's happening to your character is sort of also happening to you."

She Wasn't A Big Fan Of Lorelai And Christopher's Marriage

Not too many people were happy when Lorelai married Christopher and broke Luke's heart — Lauren Graham included.

"I have to admit, this seemed so odd to me back them (especially after all that time apart: I just didn't think Lorelai would get married without Rory present), that I somehow managed to completely forget it ever happened," she writes.

Lauren Graham's agent informed her of the news in a phone call, but none of the other cast members — except Alexis Bledel — were told of the cancelation.

In fact, Ed Herrmann, who played Richard Gilmore, found out the show was canceled from the clerk at his video store in Connecticut.

The Cast Believes Ed Herrmann Was On Set In Spirit

Ed Herrmann passed away in 2014, before the revival took shape. But his spirit was felt on set by the cast and crew, as Graham details in her memoir.

"In the show, Emily has commissioned a portrait of Richard and as we enter the living room, there's hi face, ten feet tall. For a moment no one can speak," Graham writes. "Then Kelly asks Ed to somehow make his presence known today by doing something big and loud. Later, during the scene, a key light goes out for no reason."

The Name Of The Revival Was Inspired By Carole King

Specifically, the name of the revival was inspired by Carole King's song "You've Got A Friend." The lyrics read: "Winter, spring, summer or fall. All you have to do is call, and I'll be there."

The name of the four episodes of A Year In The Life? Winter, Spring, Summer, and Fall. Coincidentally, Carole King surprised the cast and crew with a rendition of this exact song while on set to film her cameo.

It's common knowledge that Lauren Graham "accidentally" took a blue jacket from the set of the original Gilmore Girls series. This time, she wanted to take something intentionally. So on the final day of shooting in Lorelai's house, she and Alexis Bledel went searching for souvenirs. Alexis Bledel took a Yale banner from Rory's room, and Lauren Graham took a pink flamingo made of tin that hung on the wall of the kitchen.

On the final day of shooting, Lauren Graham cleaned out her trailer – only to discover the blue coat she stole from the original series run was missing. No one had seen it, but she remembered having it that morning. She never found it, but she suspects it may have been taken by someone on the Warner Bros. tour. "If that someone is you, no hard feelings, but can you mail it back to my manager in Los Angeles, John Carrabino, no questions asked?" she writes.

Somehow, Lauren Graham managed to avoid all the noise about the "final four words" of the series. When she told Amy Sherman-Palladino about this, the showrunner asked her if she'd rather find out right then or wait until the day they filmed the scene. She chose to find out then, and like many fans, she was incredibly surprised by the revelation.

Lauren Graham Thinks The Final Four Words Could Be A Cliffhanger, Not An Ending

This may not be the end of Gilmore Girls — at least according to Lauren Graham. In her memoir, she writes that she believes the final four words could be a cliffhanger, not an ending. Which would mean more Gilmore Girls is coming our way.

For more Gilmore Girls secrets, check out Lauren Graham's memoir, Talking As Fast As I Can, out Tuesday.

More like this
'Gilmore Girls’ Lauren Graham Just Revived Our Hopes For A New Reunion
By El Hunt
The 'Firefly Lane' Book Ending Teases Way More Tears To Come In 2023
By K.W. Colyard
'Bridgerton' S3 Teases Exciting Social Season For Penelope Featherington
By Bustle
Lib & Will’s Romance In 'The Wonder' Is Very Different From The Book
By Sam Ramsden
Get Even More From Bustle — Sign Up For The Newsletter