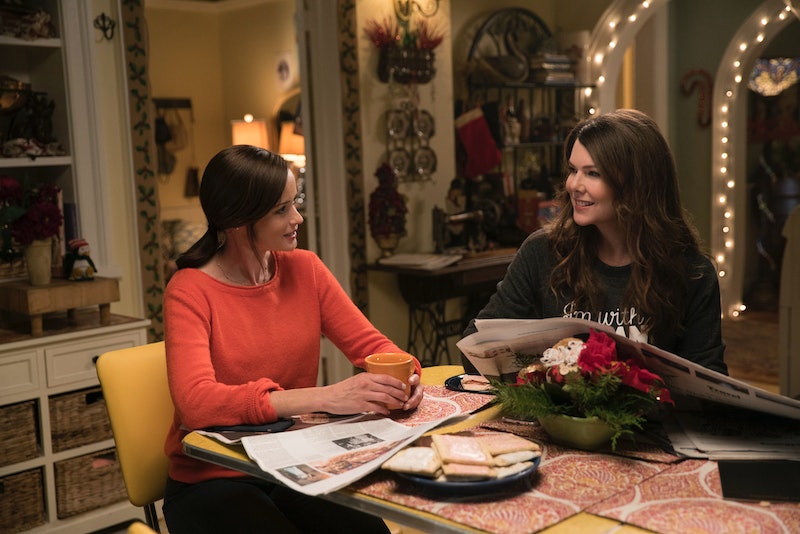 After waiting over nine years to return to Stars Hollow, part of me wanted to savor every single moment of the Gilmore Girls revival when it premiered on Netflix on Nov. 25. However, another, bigger part of me just wanted to get to the end so that I could finally find out what the last four words of Gilmore Girls would be. Creator Amy Sherman-Palladino has famously had the final words spoken in the series planned since well before the original series ended in 2007, after a seventh season that she was not involved in. Because the last words of the original series ("I guess so," said by Rory) were not what Sherman-Palladino had in mind, fans have been speculating about what they could be for over a decade. And now, thanks to Gilmore Girls: A Year in the Life, we finally know what they are, and though some fans theorized they'd be something along these lines, I don't think any of us were actually prepared to hear them. Are you ready? Spoilers for the Gilmore Girls revival ahead.

The final scene of Gilmore Girls is exactly what it should be, just Rory and Lorelai, sitting in the gazebo of their beloved town and talking to each other. After talking about their futures, Lorelai tells Rory that she'll find an amazing guy one day, and Rory gets choked up. She then looks around and says she wants to "remember it all, every detail." Then, the final four words — an exchange between the two — begin:

Yes, Gilmore Girls ends, possibly forever, with Rory telling her mother that she's pregnant. It's quite the cliffhanger, especially since Rory didn't end up with any of her three main ex-boyfriends, or anyone else. She was previously dating a guy named Paul, sleeping with Logan, and had a one-night stand with an unnamed guy who she met while he was dressed up as a Wookiee, but in the end, broke up with both Logan and Paul. The father of her baby could be any of these men, but honestly, it doesn't really matter.

Gilmore Girls has always been and always will be about a mother and daughter. Rory's final scene with her own father, Christopher, reminded us of that, and given the last four words, I think that was purposeful. If Rory chooses to continue her pregnancy, I fully believe that she'll follow in Lorelai's footsteps and raise her child on her own. Whoever the father is (and though I hate to admit it, that's likely Logan), he may be a presence in their life, but like Christopher — and all of the other men of Gilmore Girls — he'll always be second to the Gilmore girls.

More like this
Netflix Reveals First Look At Wednesday In The 'Addams Family' Spinoff Series
By Bustle Editors
The Office Lego Set Includes All Your Favourite Dunder Mifflin Characters
By Sam Ramsden
Josh Peck Shows Love To Jennette McCurdy After Her Shocking 'iCarly' Revelations
By Radhika Menon
At 14, D'Arcy Carden Was Sneaking Out To Parties & Crying Over Kurt Cobain
By Ivana Rihter
Get Even More From Bustle — Sign Up For The Newsletter