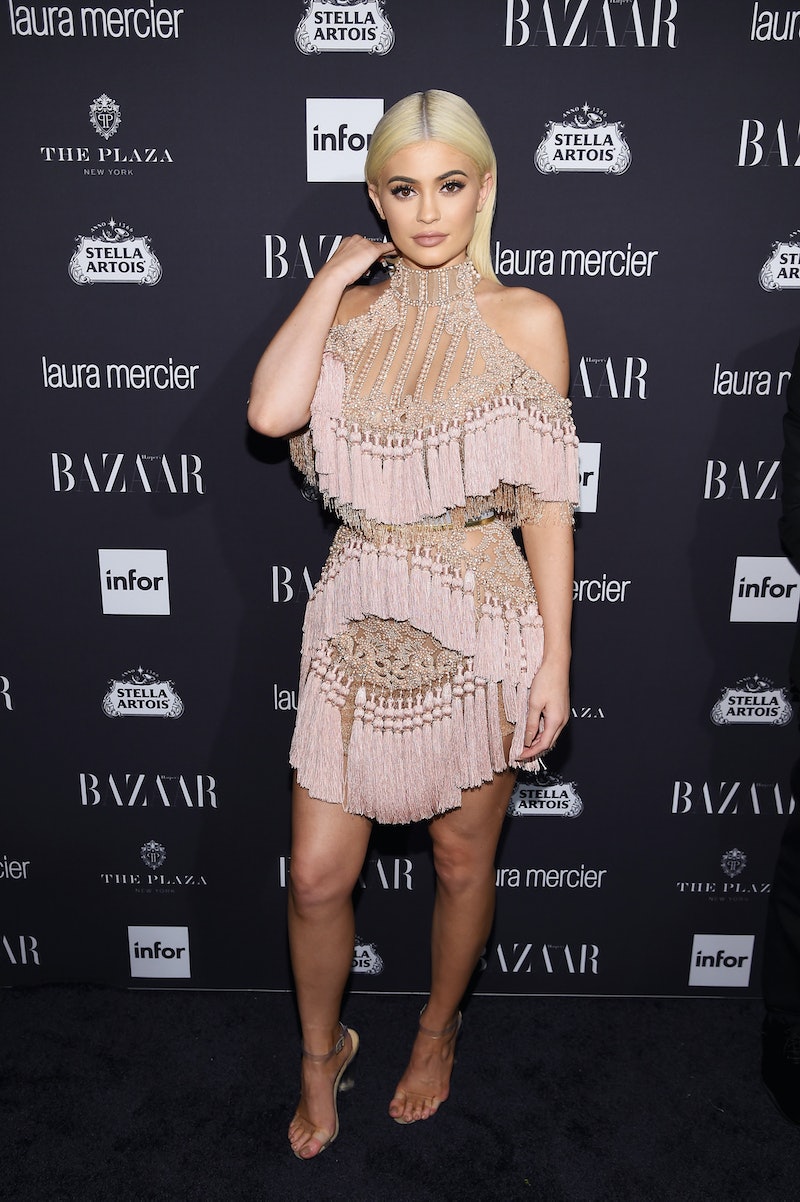 Kylie Jenner is a busy woman. Despite the seemingly tumultuous time that her family is experiencing right now, Jenner definitely isn't slowing down. Part of her busy schedule includes the pop-up Kylie Shop. Now, it looks like fans are getting a peek of the Kylie Shop products, which will be available online on Dec. 10 and also coming to the Westfield Topanga location at the same time.

Much has been made about the Kylie Shop and what it would include. Of course Jenner's eponymous brand of makeup will be featured, but other exclusive products were promised as well. As buzz has built for the shop, Jenner has been steadily showcasing the exclusive merchandise it'll host over at the shop's official Instagram account. On Instagram, she gave fans another peek at the products soon to be sold, and they're totally Jenner-centric. Would fans want anything less, though?

On Monday, Jenner posted a video to her personal Instagram account that featured images of products flipping past the screen. Hats, graphic tees, phone cases, and pins could all be seen slitting across Jenner's Instagram post. It seems as though her excitement couldn't be contained either because she also posted the gif to her Snapchat account as well. If the images are any indication, there's a ton of bomb products coming to Kylie Shop.

So far, what do fans know is headed their way? The list is growing.

Jenner knows how to make fun of herself and this slogan tee is proof.

Photographic tees also seem to be a huge part of the store.

Jackets and hoodies are also another integral part of the Kylie Shop — or so it seems. From bombers to hoodies, you could see them all in the Instagram post.

Even before the Kylie Shop was announced, speculation began about a Kylie Cosmetics hat. It's now clear why Jenner was rocking it a few weeks ago.

If you weren't able to snag the Kimoji case with Jenner's face on it during her birthday, now's your case to get a Kylie Kase.

From thongs to sports bras to briefs, theories about lingerie coming is kind of correct. Undies are definitely headed fans' way.

No individual shots of the pins have emerged, but they definitely have a Kylie Cosmetics bent to them.

It looks like Jenner is teaming up with brother Rob Kardashian's sock line to bring Kylie Cosmetics socks to her fans.

Clearly, Jenner is passionate about giving her fans everything they want. The Kylie Shop products are a seriously killer start.

More like this
Looking Back At Kylie Jenner's Best Fashion Week Looks
By Allie Fasanella
Kylie Jenner's Giant Lion Head Outfit Has A Deeper Meaning
By El Hunt
Kylie Jenner Wore A Stunning Corset Dress For Paris Couture Week
By Dominique Norman
Kylie Jenner Rocked A Very Kim Kardashian-Esque Outfit At Couture Week
By Allie Fasanella
Get Even More From Bustle — Sign Up For The Newsletter
From hair trends to relationship advice, our daily newsletter has everything you need to sound like a person who’s on TikTok, even if you aren’t.