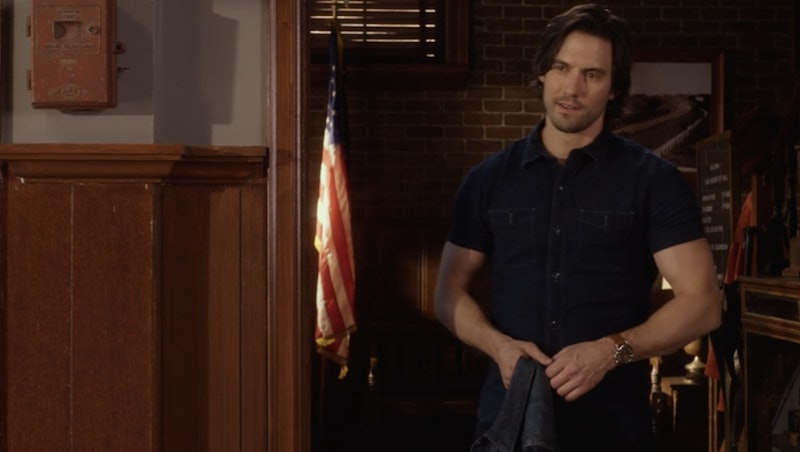 The thing about Gilmore Girls: A Year In the Life, is, that the final four words don't exactly seem very final, do they? So many questions! There are spoilers for Gilmore Girls ahead — make sure you're aware of the final four words before reading on. Could Rory and Jess have hooked up during Gilmore Girls revival? Rory grew up to be so secretive about her sex life that it's technically possible, and the fact that she's pregnant at the end of the series makes that even more worth speculating.

The revival's parallels to the 1994 film Little Women unequivocally prove, in my humble opinion, that Jess and Rory are "endgame," 'shipping-wise. He is her Professor Bhaer, while Logan is Rory's Teddy Lawrence, right down to the proposal attempt in Season 7 and the fiancée he met in France.

Don't get me wrong, Rory and Jess having already hooked up is mostly wishful thinking on my part, and I can admit that. I honestly don't think it's super likely that Jess is the father. Logan, and even Paul, are the more likely candidates. The tragic history of Jess and Rory is not necessarily that they never consummated their relationship, but that that their relationship was never as serious as it would have needed to be to last. They may be right for each other, but timing and emotional self-destruction got in the way. I don't think it was the Wookiee, either. Hiding a 5-6 month pregnancy would be too difficult.

That said, it's certainly possible that Logan is not the only ex-boyfriend that Rory was sleeping with during Gilmore Girls: A Year In The Life. Here's some evidence that I have assembled as a last ditch effort to keep the Huntzbergers out of Rory Gilmore's life for the foreseeable future.

Yes, weirdly one of the biggest clues revolves around Stars Hollow: The Musical. Remember at the end of that wacky sequence, when they all started dancing to "Waterloo" by ABBA? That's how the jukebox musical Mamma Mia! ends on Broadway. What is the plot of that musical? A woman who doesn't know the identity of her daughter's father, except that it could be one of three men — a British businessman, a writer/adventurer, and an architect. Hmmm, what was Paul's line of work? He seems like an architect, that classic bland romantic comedy profession.

If the ending of the Gilmore Girls revival is a sneaky way to lead up to Season 2, then this could definitely be a bit of foreshadowing and it would put Jess in the "running," so to speak.

The Timeline Does Fit

Based on Rory's relatively light pregnancy symptoms (especially compared to Sookie's two pregnancies and Lorelai's one scare), I think it's safe to say that this baby was conceived in the fall, or at least at the end of summer. That does make Jess well-placed to be the father. He's also staying at Lorelai's house, it seems.

Jess Is A Big Fat Liar

There's clearly something still there between them. It was never over. They are consenting adults. Why not? Her relationship with Paul, affair with Logan, and one night stand with a cosplaying Wookiee proves that she has no problem with casual flings.

I know it would be a weird storytelling move if they had hooked up during "Fall" and never acknowledged it, but A Year In The Life is not structured like regular episodes or seasons of television. There's a lot that happened off-screen. Jess and Rory spent more time together in the Gilmore Girls revival than we saw, which could have lead to something.