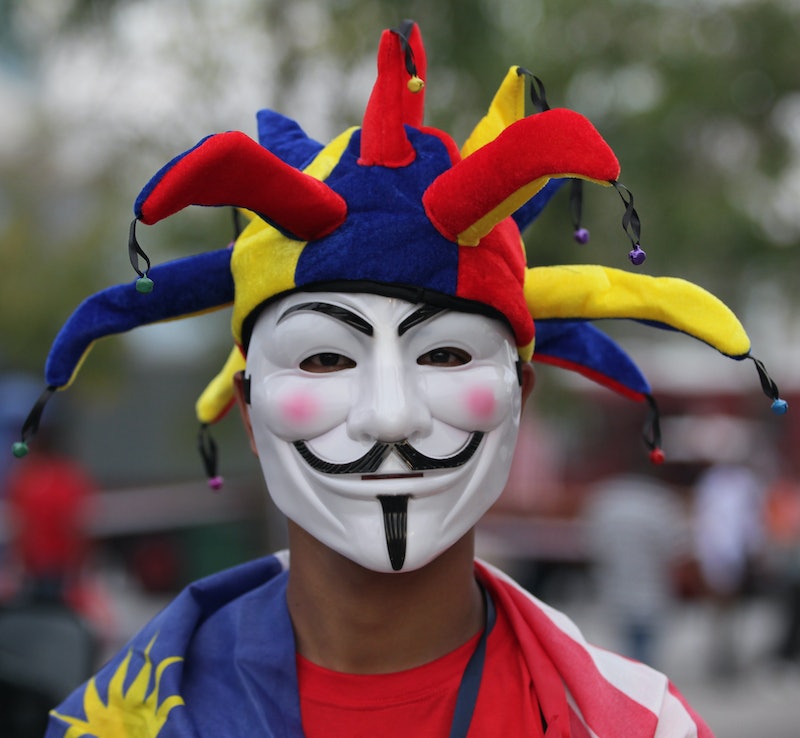 Sadly, you'd be hard-pressed to find a news story online that doesn't warrant some questioning on April Fools' Day. But besides the generally farcical state of modern media, there have been actual prank headlines today on Google News: the recent poll that says Americans would rather be cannibals than go vegan; fracking on the grounds of Buckingham Palace; chickens laying square eggs, and more fake news stories have abounded. While April Fools' is a good reminder that you shouldn't trust everything you read on the Internet, there are some pretty bizarre headlines out there today that happen to be both crazy AND true.

Check out these 10 real, ridiculous stories that'll should be pranks — but aren't.

Not a typo. The Sith Lord is looking to become Commander in Chief of Ukraine, announcing this past weekend that he's running to represent the Ukrainian Internet Party. It's no surprise the party is known for its attention-grabbing stunts. While the candidate is really just some unnamed guy parading around in a Darth Vader costume, the iconic figure is no stranger to Ukrainian politics: He's been seen before during protests in Kiev, flanked by stormtroopers. Putin may have met his match.

One Malawi man lost his manhood and three toes after allowing a hyena to attack him. He was told by a witch doctor that sacrificing parts of his body would get him rich. Anything for a quick buck, right? He tells the Times of Zambia that he went to a bush where he was instructed to be naked when the animal pounced.

“Even if I have lost some important parts of my body, I still want to get rich,” he said. He's in stable condition, though no word yet on his sanity.

8. Woman Steals Rolex, Hides it in her Vagina

In continuation of weird, genital-related news, one woman was arrested in Las Vegas after she was accused of stealing a $35,000 Rolex and hiding the goods in, well, her goods. Christina Lafave offered a man a private massage at his suite and later took off with his Rolex Presidential watch. She denied taking the accessory, and after combing through the hotel room, police couldn't find it.

One place they didn't check? Her vagina. Lafave was taken to a local medical center, where she admitted she was in pain. A search warrant was signed, and an X-ray revealed the missing watch.

There's a special ingredient at one Vancouver pizzeria: marijuana. Mega iLL, serves their pizza with marijuana oil — but only to customers who are over 18 and have a medical marijuana card. Vaporizers and grinders are also on the tables for a weed-friendly environment (it's BYOC - bring your own cannabis).

The pizzas are infused with THC, and the oil is drizzled on the pie before it's cooked.

We wish this were a joke. Giant rats the size of cats are apparently roaming the streets in the West Midlands of England. Birmingham has a rodent problem, but residents are reporting the animals are nearly two feet long. TWO FEET LONG, and "wide as a brick," a pest control officer tells the Birmingham Mail.

Colin Watts continued to say that one rat he saw was like a small cat, and some felt as heavy as two bags of sugar when picked up. Great. Maybe they can make friends with the giant Ratzilla that chewed through one family's concrete wall in Sweden last week.

5. Artist To Spend Two Weeks Inside Bear, Because Art

Abraham Poincheval is beginning an artistic performance that will have him spending 13 days living inside a bear. "Dans La Peau de l'Ours", or "Inside the Skin of the Bear" at the Hunting and Wildlife Museum in Paris will feature the artist sleeping, drinking, and going to the bathroom inside the sterilized carcass of the animal. There is a deep, existential message here, obviously...

One 31-year-old farmer is ACTUALLY GOING TO PRISON for naming his beloved donkey "Sisi." The Qena Misdemeanor Court sentenced him to a year on charges of "humiliating the military,” according to the Egypt Independent, because he named the animal after the recently resigned military chief Abdel Fatah al-Sisi.

In earlier years, farmer Omar Abul Maged voiced his opposition of the leader by riding his donkey through his village, covering its body with a poster of al-Sisi, and putting a military-style cap over its head.

The Book of Exodus described the ten plagues, including a swarm of locusts, a lice outbreak, boils, and other awful inconveniences. But one writer is now demanding that Egypt sue Israel for "compensation."

Ahmad al-Gamal, an Egyptian columnist, says the country deserves payment for "the curses that the Jews’ ancient forefathers [cast] upon our ancient forefathers, who did not deserve to pay for the mistake that Egypt’s ruler at the time, Pharaoh, committed,” according to a report by the Times of Israel. In addition to his demands, he wants to sue Israel for the "precious materials" ancient Israelites used to construct their desert tabernacle.

Since the annexation of Crimea, everyone's been asking: What's Putin's next move? Now, thanks to a new petition, Alaska might be the next target. With more than 36,000 signatures, a White House petition is calling for the state to secede back to Russia.

For those of you scratching your heads, a little history lesson: The United States purchased Alaska from Russia in in 1867 for $7.2 million. It's unclear where the petition signatures are coming from, but the Moscow Times reports that Government Communication G2C, a pro-Kremlin "communications platform," uploaded the written request, not to bring the state back to Russia, but to show the White House that their petition system is flawed.