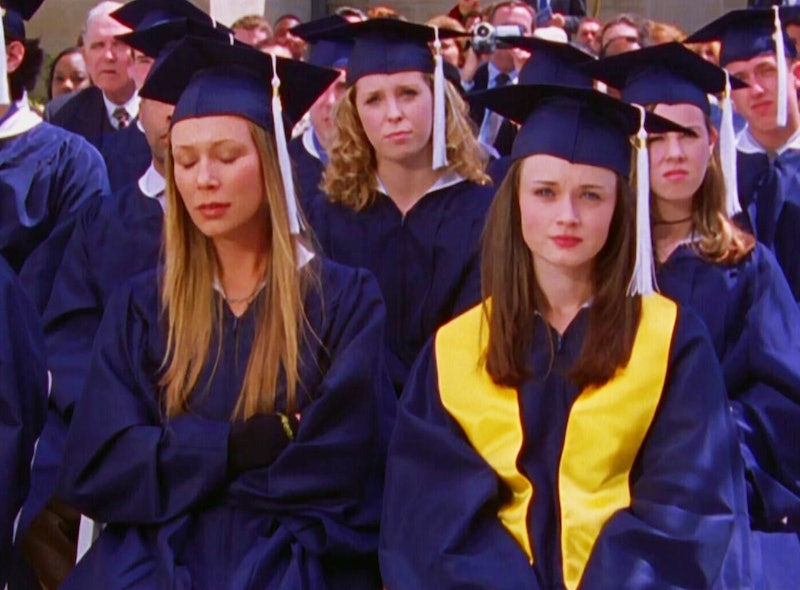 Gilmore Girls: A Year In The Life is finally here, and most fans have devoured all six hours of the revival already. However, the Netflix series has left us all with a plethora of questions, especially as to whether or not that crazy cliffhanger is really the end of Gilmore Girls forever. Thank goodness, then, that we have the release of Lauren Graham's new memoir, Talking As Fast As I Can , to provide us with all of the inside gossip about Gilmore Girls that we could possibly need. And one of the most endearing anecdotes in the book involves Graham's real life sister, which is beyond cute.

As anyone that's watched Gilmore Girls: A Year In The Life will know, the show is filled with impressive cameos, from Graham's Parenthood co-stars to her real-life partner Peter Krause to TVLine's Michael Ausiello. Part of the fun of watching the Gilmore Girls revival was picking out the famous guest stars lurking in each scene, which included trying to decipher why Ray Wise, who played the sinister Leland Parker in Twin Peaks, was playing Emily Gilmore's new beau (beyond creepy).

In Talking As Fast As I Can, Graham reveals that several of her family members made cameos in the original run of the show, proving that Gilmore Girls is the most family-oriented show of all time. "That's my sister Maggie sitting right between Rory and Paris at the Chilton graduation," she said of a pivotal scene in Season 3.

It's more than a little exciting to find out that Graham's own sister was present at Rory's graduation, and that she was placed in the scene so as to appear on camera. It's yet another example of Gilmore Girls honoring the importance of family. And it doesn't stop there, as Graham writes,

Over the years, many family members made cameos, in fact. My cousin Tim still talks about his favorite episode: 'The one about the guy carrying flowers through the lobby of the Dragonfly.' He (obviously) starred in it as The Guy. I'm sure it's your favorite episode too.

Graham's sardonic humor is on point as she describes the familial reactions to their starring roles on Gilmore Girls, and it's certainly a fun fact for fans to learn. The series has always had such a strong focus on family, circling around three generations of women and the relationships they have with one other. That Graham's own clan were involved in filming the show, and still hold their on-set experiences dear, is so endearing to hear.

2016 truly is a fantastic year for Gilmore Girls fans, and the generosity of Lorelai Gilmore herself, Lauren Graham, is giving viewers everywhere hope for the future. With the possibility of even more Gilmore Girls episodes on the horizon, it's exciting to speculate which incredible guest stars might appear in any future revival of the series.