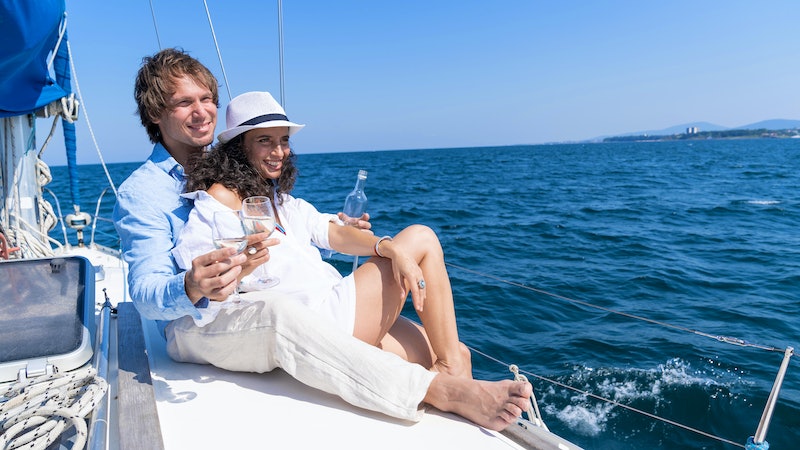 There's a new trend in town, and it has to do with the way newlyweds honeymoon. "Tiny-moons" offer another alternative to the big post-wedding vacation — but what is a tiny-moon, and why do newlyweds dig the concept so much? These days, milestones like weddings and honeymoons are all about options — and happily, that's what tiny-moons give us.

Weddings don't look the way they used to 10, or even five years ago. Women don't feel obligated to wear a shade of white (hooray!), we get married wherever the heck we want to, and there's not as much pressure to spend a ton of time and cash on a fancy honeymoon, if you don't want to for any reason. That's where tiny-moons and mini-moons come into play.

But before we get into the details of the tiny-moon, let's back up a little. Why do we go on honeymoons in the first place? Well, one proposed origin might not be what you expect. The word "honeymoon" originates from the Old English "hony moone." "Hony" is a reference to honey and points to the "indefinite period of tenderness and pleasure experienced by a newly wed couple. "Moone" refers to how quickly this feeling can leave, with another possible origin being a reference to the waxing and waning of the moon (meaning a couple's affection for each other waxes and wanes). In actuality, the phrase "honeymoon" was first used as a warning about fleeting love!

The trip itself wasn't always a vacation for the newlyweds to be alone, either. In fact, in 19th century Britain, the honeymoon was instead a "bridal tour," where the couple would travel to visit friends and family who couldn't make it to the wedding. And in other cultures, couples would be separated from the time of the engagement to the wedding, with the honeymoon being the chance for them to be together again.

Slowly, the concept of the honeymoon changed to one of enjoyment. By the 1830s, wealthier couples would venture to places like Niagara Falls, which became one of the top honeymoon destinations for people who could afford it. The middle class eventually caught on, too. While their trips were maybe shorter and less exotic, the advancement of transportation made honeymoons a possibility for more people. And it's the evolution of a more accessible honeymoon that leads up to mini-moons and tiny-moons.

Mini-moons started popping up a few years ago as an abbreviated version of a bigger honeymoon that would be planned somewhere in the future. Maybe your work schedule won't currently allow for a long vacation immediately following your wedding, or your wallet is saying, "Um, no." Whatever the reason, mini-moons simply say, "We'll do this later." Maybe you escape for a couple days or a long weekend to a nearby destination instead of taking the week- or weeks-long vacation that makes up the traditional honeymoon.

The newest trend from this year takes the mini-moon one step further, with the tiny-moon. This means you spend a day or two over a weekend in the city you got married in or where you live. It's a time to reflect, unwind, and be alone with your partner — without planning even a small trip. Think of it kind of like a staycation for newlyweds.

Mini-moons and tiny-moons offer a very reasonable alternative for newlyweds who want to acknowledge their wedding and marriage, but can't really commit to anything bigger at the moment (or simply don't want to) – and that's a wonderful thing. Honeymoons aren't cheap, and our schedules don't always allow for week-long (or longer) vacations. If you want a big honeymoon and are able to pull it all off, brilliant — whether it's immediately following your wedding or much further down the line. And if not, you can still have a small celebration after saying "I do."