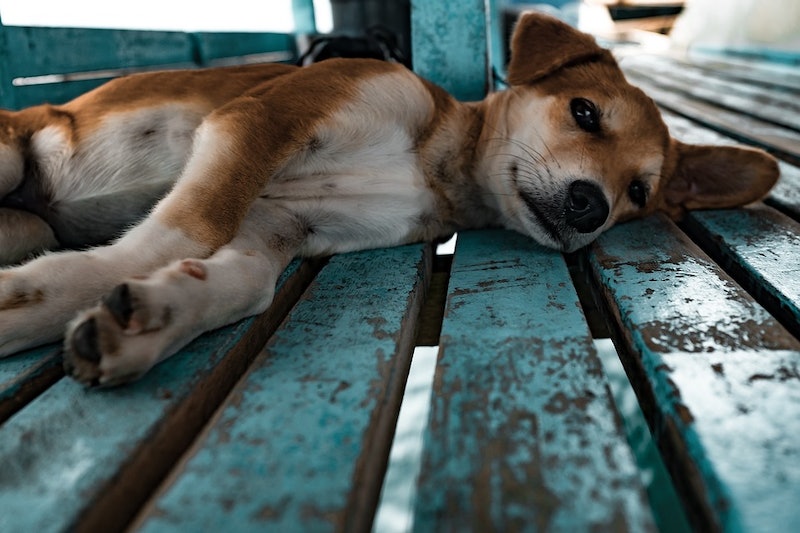 Ever loved a dog to bits even though you haven't got the faintest idea what breed it might be? Happens all the time. Dec. 2 is National Mutt Day, so let's explore why getting yourself a mutt (a dog of mixed breed, often unclear) is an excellent idea if you're in the market for a wonderful ball of fluff.

Mutt definitions, interestingly, are pretty strict. Designer crosses like Labradoodles (Labrador and Poodle) and Cockapoos (Poodle and Cocker Spaniel) aren't usually included, because they're technically designated as "hybrids" and usually have purebred parentage. Mutts, on the other hand, may be a mix of four or more breeds because their parentage may also be mixed-breed, so you may end up with what's called a "Heinz dog," a reference to the 57 varieties of Heinz. A muddle? Maybe. Delightful? Definitely.

As much as purebreeds can be wonderful (I had two purebred Akitas growing up), mutt dogs are also deserving of love and ownership, and have their own advantages over purebred animals, from cost to disease incidence to personality diversity. We're also gradually uncovering that the characteristics designated as "good" for purebred dogs might not actually be all that good for dogs themselves, and that mutts may well be the dogs of the future. If you're in the market for a furry friend, here are some pretty persuasive reasons to get yourself to a shelter and get a a mutt rather than going to a breeder.

They're More Resistant To Genetic Diseases

The notion that mutts are stronger and longer-lived than pedigree dogs due to a lower likelihood to inherit genetic diseases emphasized by "pure breeding" is often bandied around. But the reality itself is a little more complicated. Purebred dogs are indeed, as Scientific American explained in 2014, likely to come with a range of inherited diseases that alter by breed, in part because breeders have, for thousands of years, prioritized how the dogs look and behave over genetic diversity or avoiding inbreeding. (This is why people intent on buying purebreds are highly recommended to get genetic testing and a complete history of the dog's medical pedigree to know what they might be in for.)

Some of this is because the "look" of the dog set by standards is actually harmful. There has been increasing momentum in the purebred community to try and de-emphasize some of the more problematic inherited genetic traits in breeds; the judges who declared a German Shepherd the winner of Best in Show at Crufts 2016, for instance, were widely criticized because the dog's sloping back, while traditionally "good" for purebred looks, would likely have terrible consequences for the spine and hips. But when it comes to inherited genetic disease itself, a 2013 study gives a good insight into the advantages and disadvantages of mutts over purebreds.

According to the study, which looked at the medical records of 27,000 dogs, 10 genetic disorders were much more likely to turn up in purebred dogs, from allergic dermatitis to elbow dysplasia and disk disease. One, however, was more common in mutts: a ruptured cranial cruciate ligament, or the equivalent of ruptured knee ligament. On a host of different diseases, the risk appeared to be completely the same. On balance, then, a mutt does seem to be a healthier option, but not one completely without the risk of ordinary medical problems, or absolutely protected against genetic disorders of any kind.

Picking up a mixed-breed beauty from a shelter not only supports the shelter's work and gives you a lovely new companion — it also fights against one of the scourges of modern canine life: puppy mills. Puppies from these places are often sold as purebreds when, in fact, they're more than likely to have mixed or unknown genetic history. Mills are "large-scale commercial dog breeding facilities where profit is given priority over the well-being of the dogs," according to the ASPCA. They often house dogs in crowded, unsanitary conditions without due care or attention to their needs. Pet stores are, unfortunately, often the destination for puppy mill pups, which makes them dangerous places to pick up animals themselves rather than just food and supplies.

Giving your money to shelters (or, if you're intent on a purebred, finding a responsible dog breeder according to the Humane Society's guidelines) is a step toward making sure the mills go out of business. Approximately 3.9 million dogs go into shelters every year, and 1.2 million of them will be euthanized. Many of them are mutts — and you could be the one to save their life. That said, don't get mutt puppies from backyard breeders or friends without certification; that's a very good way to get a sick or under-socialized animal.

Superficially speaking, one of the biggest upfront delights about a mutt is that they don't come with the hyper-massive price tag of a purebreed dog (or one presented as pure to get the same price). The minimum for a puppy from a purebred litter will be around $500, with costs escalating to upward of $3,000 for show breeds and particularly special dogs. By contrast, a mutt from a shelter will cost the upfront shelter fee, usually including a full medical examination and neutering, and nothing else. This is not to say that mutts won't incur their own costs over the course of their lifetimes, which is why you should definitely get pet insurance; but pedigree pets incur higher costs for insurance because of their higher risk of hereditary conditions.

There's No Pressure To "Do Something" With Them

The Dog Owner's Guide points out an excellent advantage that may not even have occurred to anybody who has never owned a purebred or pedigree dog: You're not under any pressure to "do anything" with a mutt. Dogs with show names, in particular, come with expectations that you should show them, breed them, and generally let them "live up" to their genetics. (I had a childhood dog that rejoiced in the pedigree name Princess Elizeum Shikishi III, and people were shocked that we just wanted her around for cuddles.)

Mutts, by contrast, are totally unencumbered with any such expectations, but you can indeed enter them into dog shows (Purina's Mixed Breed Dog Show is one of the most famous), train them as agility, rescue, or therapy dogs, and do anything you like provided that it fits their temperament. It's much more freeing.

Their Combined Temperaments May Make For A Better Fit

Predicting temperament is an interesting thing in dogs. Even in purebreeds, while there will be certain inherited traits that are likely to pop up (intelligence in poodles and tenacity in terriers, for instance), every individual dog is different. That individuality comes to its peak in mutts, though. The mixture of genetics in a mixed-breed dog can produce something uniquely adapted to your life and happiness; a big galumphing lump who just wants to lie on your bed and cuddle, a small intent chaser who loves to run, a medium collie-type who entertains the kids. It's a diversity that can create a perfect fit, even if the dog appears to have the feet of a Great Dane and the ears of a spaniel. Who cares?

All that said, mutts require all of the same training and attention as purebred dogs, so don't get one thinking they're "lower maintenance" in that way. But if you're thinking of getting a dog, clearly, a mutt from a shelter is the kindest, cheapest, and potentially healthiest way to go.