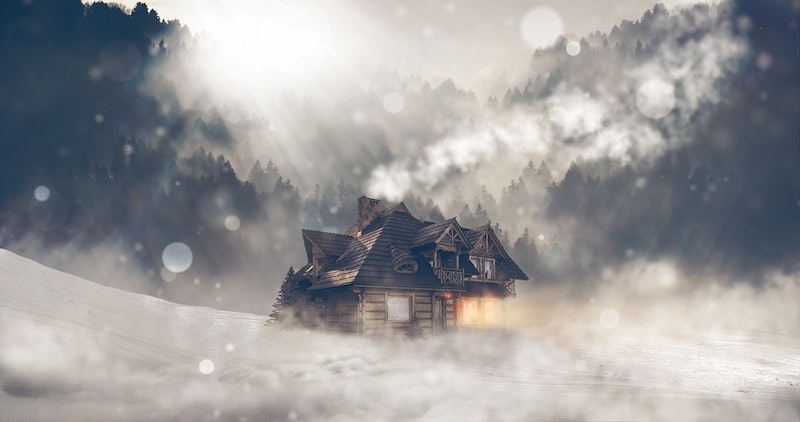 As the great George R R Martin says, winter is coming, and for many of us, that means the onslaught of great white patches of snow to shovel, kick into slush, make into ice cream, and generally wreak havoc with. The status of superstitions about snow in history has, however, been a bit confusing over the centuries; it's been used as a basis for everything from miraculous church-building to questionable medical cures, from holy substance to cause of disease and potential breeding-ground for hairy grubs. (Yep. Grubs with hair.) You'd think that frozen water crystals wouldn't attract much comment, but you'd be reckoning without centuries of frankly bizarre human activity. Snowmen are the very least of it.

Snow has attracted a collection of some strange historical legacies. For one, it's meant to have killed Sir Francis Bacon. (That's the story, anyway; we know that Bacon was doing experiments on whether chickens can be preserved by snow and ice in 1626, and shortly afterwards succumbed to pneumonia and died.) For another, it's supposed to have been part of one of the most decadent stunts in culinary history, in which the Roman emperor Nero sent runners up the Alps to bring down snow for an ice cream-esque dessert. Neither of these anecdotes can be precisely proven, but when it comes to snow's bizarre place in humanity's history, that's not even scraping the sides.

The white stuff really does seem to make us crazy; ready to go historically snow-blind?

That Snowfalls Bring Out Demon-Women Who Drive Men Insane

Ancient Japanese folklore involves a terrifying demon-woman creature centred on snow called a yuki-onna. The yuki-onna is a beautiful, extremely pale woman of immense size ("tall as the trees," apparently), who does what most snow-demons of one kind or another do: she lures people into blizzards until they die and she can feast on their blood. The yuki-onnna is either meant to be the ghost of a deceased woman with her child, or just a malevolent force hanging around for those unwise enough to take a walk in a snowstorm. Tales about it tend to focus on its beauty, which it uses to lure men to have sex with it (in blizzards no less), and on its eyes, which can send people insane through one glance. Getting out of an encounter with a yuki-onna as a dude usually requires that you be very persuasive and extremely cute.

That Snow Could Produce Life

The ancient Greeks were a bit confused, in many instances, about where life itself actually emerged from. They were often fans of the idea of spontaneous generation, in which everything from insects to humans were formed from things like dust, rotting flesh, river mud, and other substances. (We now know, of course, that this isn't the case, though it spawned some really remarkable theories: for centuries, barnacle geese were thought to "grow" out of goose barnacles because nobody ever saw them nest or produce eggs. No, really.)

Snow was one of the substances that they thought could produce life, specifically a kind of worm or grub; Pliny the Elder (who else) voiced the theory that "snow that has laid long on the ground" was prone to filling up with white-reddish grubs, "covered in a sort of hair, of a rather large size, and in a state of torpor." Well, you'd be asleep too if you were literally born out of snow.

That A Snowfall Should Dictate Where A Church Goes

Holy snowfalls are actually a pretty strong part of the early Christian tradition, most notably in the case of a miracle in which the Virgin Mary decided to appear in dreams to two people at once. The legend dates back to the Roman empire's last centuries, in 352 AD, when the Mary dream occurred to both the Pope and a wealthy Roman, instructing them to build a church to her wherever they found snow on the Esquiline Hill, one of the famous seven hills of Rome. The two men apparently went hunting and found a snowfall in the exact shape of a basilica on a beautiful part of the hillside, because Mary was clearly an architectural genius. They promptly built what became the Basilica di Santa Maria Maggiore, one of the most important religious places in Rome.

That You Could Get Goitre From Drinking Melted Snow

This one wasn't debunked until the 1830s, and apparently held sway for centuries. Goitres are swellings of the thyroid gland in the neck, typically caused by thyroid issues or iodine deficiencies; but everybody from the ancient Greeks onwards thought it was likely due to exposure to something nasty in food or drink, and zeroed in on the practice of drinking melted snow. Everybody from Galen onwards established that snow water created the risk, and recommended therapies like seaweed to help cure them. (Seaweed contains iodine, which is likely why this helped.) However, by the early 19th century doctors began to notice that it was likely a mineral issue rather than too much cold water that caused goitres, because they didn't just correspond to extremely cold countries, funnily enough.

That Snow Didn't Affect The Insane

The famous French physician Philippe Pinel is most renowned for introducing the doctrine of "humane treatment" to society's approach to the mentally ill; prior to his career in the 18th century, they were likely to be locked up and treated a bit like animals, complete with chains. Pinel also made a lot of observations of the particular affects of different kinds of madness, including the observation in his 1806 Treatise On Insanity that "lunatics" seemed to be far less affected by snow and freezing temperatures.

"No sooner was the door opened in the morning," he wrote of one patient, "than he ran... into the interior courtyard of the hospital, where he seized upon handfuls of snow, and applied it to, and let it melt on his naked bosom. This process appeared to give him unspeakable delight and satisfaction." Pinel thought this was something to do with the "natural heat" of the man's system.

That The Tongue Of A Male Fox Would Cure Snow-Blindness

A German book from 1583 on the health of vision and the eye actually has some pretty good ideas about what causes problems in how we see: alongside "reading fine script" and "excessive bloodletting," the author noted that "wandering in the snow for a long time" could do some damage. (He also thought that eating too many peas would do the same thing, to be fair.)

Snow-blindness is actually a burn on the cornea from over-exposure to highly reflective snow. In those days, treatment involved medicated eyedrops and patches, but the German writer had his own ideas; he recommended that men wear the tongue of a male fox around their neck (women, of course, should have the tongue of a vixen) as a charm to help recovery. Hey, you can't see, but at least you won't be able to see the faces of all the people disgusted by your necklace.

That Snow Could Cure Warts, Nosebleed, And Toothache

A collection of folk medicine from the 1920s-50s creates the distinct impression that everybody was trying their best to be killed by cold. A barefoot run in the first snow of the year is recommended for everything from preventing chilblains in children to frostbite and sore throat. Eating or drinking it, meanwhile, was a cure for many ills, including warts and toothache (and freckles, which needed a "treatment" at the time), and if you had a nosebleed it was a good idea to hold snow at the back of your neck, presumably to give you something else upsetting to think about.

Feel free to go traipsing around with no shoes in the first snow, but be warned you may not get much protection from anything out of it except very, very cold toes.

More like this
25 Inspiring Quotes From Black Women To Celebrate Black History Month
By Kyli Rodriguez-Cayro and JR Thorpe
19 Instagram Captions For Celebrating Black History Month
By Ayana Lage
15 Black-Owned Liquor & Wine Brands To Add To Your Bar Cart
By Alexis Morillo
4 Zodiac Signs That Will Take Forever To Admit They Like You
By Kristine Fellizar
Get Even More From Bustle — Sign Up For The Newsletter
From hair trends to relationship advice, our daily newsletter has everything you need to sound like a person who’s on TikTok, even if you aren’t.