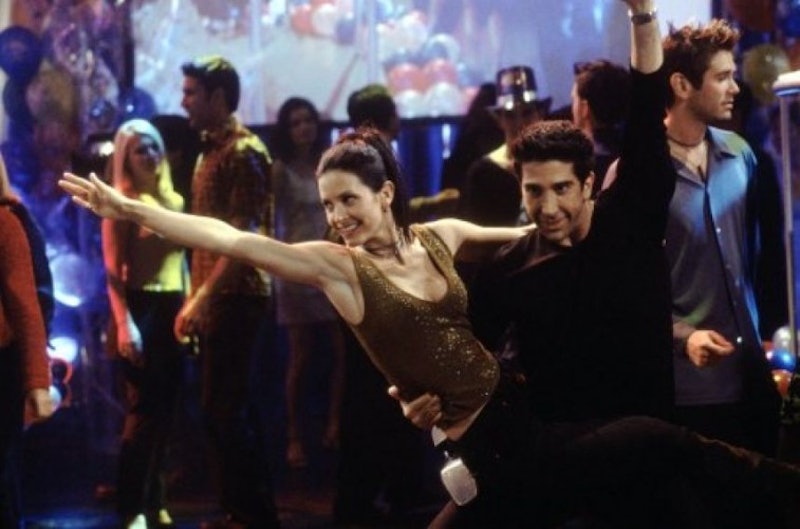 Yep, it's almost 2017, and I know what you're thinking: how can you make this the most '90s New Year's Eve ever. Also probably: "Where did the last year go?" and "What is happening to the world?" But those big questions are, for this moment, nothing compared to planning your New Year's Eve in the spirit of the '90s. Some people are big old Debbie Downers about New Year's Eve. Some people think it's not ever as fun as you hope it will be, and that it's an overrated night. But those of us who grew up in the '90s know that New Year's Eve is the most magical night of the year.

For whatever reason, the '90s loved New Year's Eve. In '90s pop culture, New Year's Eve was the night when stuff happened (that, and graduation). So you're going to have to orchestrate some elaborate things (can anyone say "The Routine"?) in order to maximize the '90s-ness of your New Year's Eve. It's time to tease your bangs, get out that wiggle skirt and your cutest pumps, some purple lipstick and a plan that screams "Shannon Doherty is going to party like it's 1999". Here are some ways you can have the most '90s New Year's Eve to ring in 2017.

1. Have Someone To Kiss When The Ball Drops

The '90s were all about New Year's Eve kisses at midnight. It was the post-When Harry Met Sally, and if you watched TV (especially the episodes of Friends where kissing on New Year's Eve is a big deal) you knew that the most important part of NYE was the ball-drop pash. So celebrate the '90s by finding someone to smooch at midnight.

2. Finally Hook Up With That "Will They Won't They" Friend Of Yours

Again, in the spirit of When Harry Met Sally (which ushered us into the age of '90s NYE worship), hooking up with that friend who you have a crush on and who secretly has a crush on you is essential on NYE.

3. Come Up With An Elaborate Dance Routine

You are not doing a '90s themed NYE right if you're not being Monica and Ross doing The Routine.

Accessorize with glitter. In the '90s you'd rub yourself down with body glitter, and your blue eyeshadow would be swept with some eye glitter too. Bring the '90s back in the most fabulous way possible and spend your NYE covered in glitter.

5. You Need Big Hair, And I Mean BIG Hair

Party hair in the '90s involved a lot of crimping and teasing, and NYE is the biggest party of the year, so if you want to do it '90s style, you should bring your biggest hair.

6. A Body Con Dress Because Nothing Says '90s Party Like Being Squeezed Into A Red Dress With A Square Neckline

I always think of Cher's red party dress from Clueless when I think of the ultimate '90s party outfit. It should be a tight dress with a square neckline and you're nailing that '90s look.

7. Or A Slip Dress Because Nothing Also Says '90s Like Sleepwear As Partywear

Or the alternative is a slip dress. Wear something you'd wear to bed, but in silver satin, and you'll feel like Rachel Green on NYE.

Masquerade was big in the '90s, so throw an Eyes Wide Shut-style NYE party for max '90s mystique.

9. Or If You're In College, Some Kind Of Massive Party Where You And Your Friends Go On A Journey Of Self Discovery

If you're still into house parties where people do keg stands, that's great, but prepare for some epic journey of self discovery over the course of the evening, while your friends all have their own individual journeys. After all, wasn't this the stuff '90s teen/college parties were made of in pop culture?

10. Have Confetti Ready To Magically Fall From The Ceiling

HOW DOES THIS ALWAYS HAPPEN IN NYE SEQUENCES? You're going to have to figure it out and make it happen, because raining confetti from the ceiling at midnight is a '90s NYE staple.

11. Get Your Playlist In Order

Your '90s NYE is heavily dependent on your playlist, so put your thinking cap on, and in advance, make yourself the ultimate '90s playlist. It absolutely must include the Venga Boys.

More like this
Myra Magdalen Is TikTok’s Queen Of Chaotic Maximalist Fashion
By Sophia Moore
Social Media’s Favorite Fashion Influencer is Meredith Blake from ‘The Parent Trap’
By Morgan Sullivan
Are Skater Shoes the Next Y2K Trend to be Revived by Gen Z?
By Lauren Alexis Fisher
Linda Evangelista Leads Tributes To Iconic Fashion Designer Issey Miyake
By Sophie McEvoy
Get Even More From Bustle — Sign Up For The Newsletter