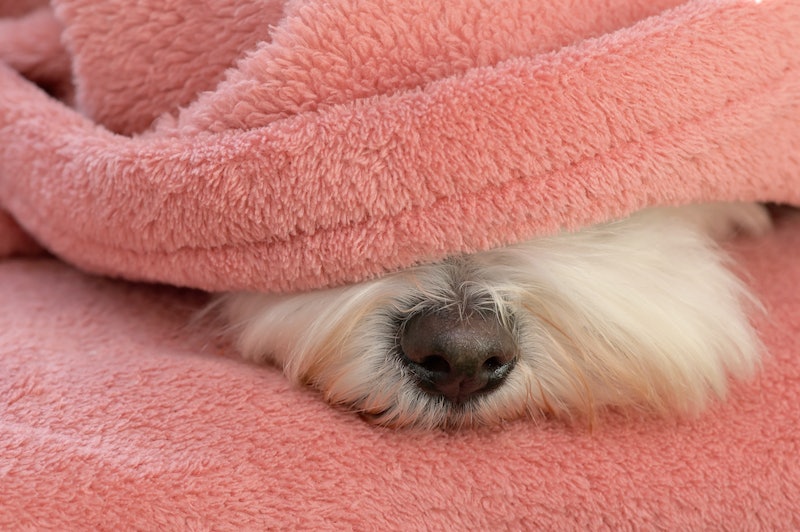 After the kind of day that starts out with scraping for grounds at the bottom of your coffee container and goes downhill from there, the prospect of "sleeping it off" is sometimes the only thing keeping you from quitting your job dramatically and running off to join the circus. (What you would do in that circus remains to be seen — hopefully you have hidden gymnastic talents waiting to be unlocked, or your fantasy may need to be readjusted to include less acrobatics and more sweeping.) But does sleeping on it actually help you get over a bad day? According to science... not really. In fact, it might even make it worse.

According to conventional wisdom, sleep functions as a kind of reset button. When you face a major decision, someone is guaranteed to advise you to get a good night's sleep before making any choices. What's more, "sleeping it off" is a common enough phrase that it has its own entry in the Cambridge Dictionary: "To stop the bad effects of having too much of something by sleeping as long as it takes to end those effects." Basically, the idea is that no matter how ill, stressed, or cranky you are before hitting the hay, everyone seems to feel better after a few hours spent dead to the world.

Then again, if there's anything to be learned from growing up, it's that conventional wisdom isn't always correct. So is it actually possible to sleep off a bad day?

According to research, not so much. In a study published in Nature Communications, researchers looked at the effect sleep has on bad memories, and while you might temporarily forget them while you're asleep, that nap might make them harder to suppress in the long run.

For the study, researchers asked a group of male college students to memorize 26 mugshots paired with a disturbing image such as a crying child. According to New Scientist, participants returned the next day and were asked to recall the disturbing images associated with half the mugshots. They were directed to actively try to forget the rest. After this, they were shown 26 new mugshot-image combinations and given the same instructions half an hour later: Remember half, and forget the others. Finally, participants were asked to recall all 52 disturbing images.

Researchers wanted to see if sleep affected memory suppression. Sure enough, participants had the most trouble forgetting the images they'd seen the day before, suggesting that sleep had strengthened their memories despite their intentions to forget what they saw. "Our findings suggest that overnight consolidation promotes the assimilation of newly acquired memories," researchers concluded in their paper. In other words, sleep made it harder for participants to forget.

It's all thanks to a thing called memory consolidation, which most researchers agree is one of sleep's primary functions. The theory is that during sleep, the brain strengthens the neural connections forming new memories and integrate them with preexisting knowledge. Memory consolidation was initially thought to take place during the REM stage, but more recent research indicates that it occurs during deep sleep as well. The study discussed above supports previous research; in 2012, a study conducted with rats suggested that sleep deprivation may disrupt memory consolidation after a traumatic event. So if you've ever noticed that you remember things better after getting a good night's sleep, that's partly why.

Basically, sleep's effect on memory is great when you're studying for an important test. On the other hand, it's not such a good idea when you're trying to forget something unpleasant, like the moment you made eye contact with someone across the table just as a piece of sushi fell out of your mouth. As much as you may want to dive into unconsciousness after the hideously embarrassing situation du jour, maybe go for a walk instead.