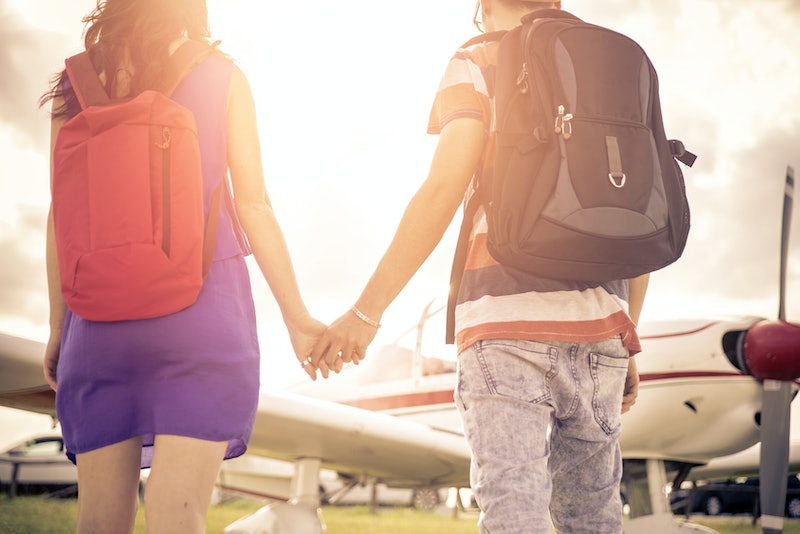 Joining the mile high club is a lot more popular than I thought. While getting frisky on a plane can seem like an impossible— and sort of unappealing— feat for some, it's happening. A lot. A recent survey from Stratos Jet Charters looked at 2,000 people to find out how often they're hooking up on planes, how they're doing it, and with who. And I was really surprised to see how many people are going for it in the air.

Almost 17 percent have already done something sexual on a flight and 52 percent had fantasized about it. So a whole lot of people are up for some in-flight shenanigans. And I'm talking about more than kissing here. What was even more surprising was not the amount of people that were game, it was how they were doing it — because it's definitely not all chance encounters with strangers in the tiny toilets.

But first, a disclaimer, because the more you know: "The Mile High Club might be exclusive and tempting but consider that while no state law might be applicable if no one sees you, there are surely some number of federal agencies that will find the conduct actionable," Joseph Tully, criminal lawyer and author of California: State of Collusion, tells Bustle, "Since 9/11, it’s best not to stretch the limits on airplanes or you risk the unbridled wrath of Homeland Security—not an agency known for a sense of leniency or humor. Destination sex might be a better bet to stay off the no-fly list.” Um, yikes.

So if you know the risk and want to take the leap, here's how:

I was surprised to see that one of the day flights had the highest rates of getting down, but what really made a difference was flight length. Aim for 3-5 hour flightst — long enough to settle in but not long enough to go to sleep. You're most likely to get down on a medium-haul flight.

2. Think Outside The Bathroom

Although we normally think of illicit liaisons in the bathroom, turns out, people are way more creative when it comes to hooking up in flights. Which makes sense, because bathrooms may provide privacy but they are the worst. The vast majority of people are getting naughty in the coach seats, but a special shoutout for the .8 percent getting some cock pit action, pun ever so intended.

Have a safe flight!