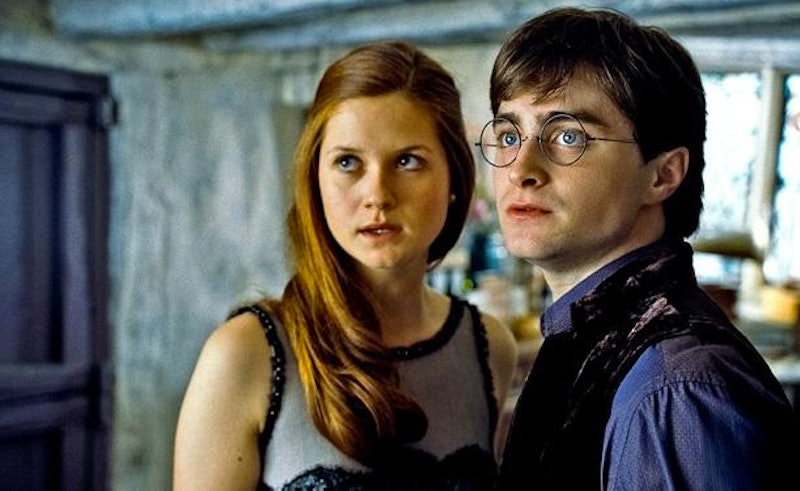 For book lovers, the satisfaction of coming across a well-written, strong female character is right up there with that first whiff of new book smell. But film adaptations can change everything. In Harry Potter, for instance, I think we can agree book Ginny is way better than film Ginny. A beloved favorite of many, the Harry Potter film series does a lot right. But when you see a film adaptation of a book you've read and loved, it's almost impossible not to critique every aspect of the story that made it to the screen.

As many nights as I've spent curled up in my Harry Potter blanket while re-watching the films because they're just so good, Ginny's character is just one of the major differences between the books and the films that keeps me awake at night. It's not uncommon for a few character traits to get twisted around once they move from the page to the screen, but Ginny's entire personality was almost completely erased by the films (yes, I'm personally offended). Book Ginny is the epitome of Gryffindor — brave, sassy, powerful, and just all-around a good person. She is a perfect combination of all her brothers' best traits and still has a fiery personality all her own.

Movie Ginny is barely on the screen and comes off quite flat as a character. While Bonnie Wright does an amazing job portraying the youngest Weasley child, her character's lack of depth comes from all the magical moments the producers and directors left out of the films. As Potter fans, we've suffered a lot from JK Rowling's heartbreaking tweets about the characters, but did we have to have Ginny taken away from us, too? Here are a few "Ginnyisms" we wish had made it from the books to the silver screen.

I understand that a film adaptation is its own piece of art and isn't going to be exactly like the books. I also understand that that with such an intense plot line and so many moving pieces, especially in the Harry Potter series, it's nearly impossible for directors and producers to capture everything about every single book character in the films. That said, the Ginny I remember from the books was sassy and snarky at any given opportunity, emanating that Weasley fire and proving that she was just as funny as Fred and George.

Book Ginny rolls her eyes, pipes up when her brothers pick on her, and slings out witty comebacks like there's no tomorrow. Movie Ginny, on the other hand, has none of that spirit and spunk that the true Ginny Weasley embodies. She's a background character and a wallflower waiting for Harry to love her back, which is everything the book Ginny definitely is not.

When it comes to making snarky comments, holding a lengthy conversation, or speaking period, movie Ginny doesn't really have anything to show for it. While she was a prominent main character in the original books, the films greatly reduce Ginny to a background character who only appears occasionally to remind the audience of Harry's love interest (ugh). The first few films in particular portray her as very quiet and shy, biting her tongue whenever she feels the need to join a conversation.

While Ginny was a little quiet in the books at first, she quickly stepped up as a character who proved she could hold her own and wasn't afraid to tell anyone how she felt. She was nothing like the wallflower the films made her out to be and her rambunctious attitude was part of what made her such a great role model for young girls. In a family full of boys with boisterous personalities, Ginny could have easily let herself be overlooked. But, she was her own person who made herself heard and came up with some great ideas to help defeat Voldemort along the way.

Regardless of how the films and books differ in their depictions of Ginny's character, her relationship and eventual marriage to Harry is what officially makes the Boy Who Lived a member of the Weasley clan, which will always be heartwarming. Still, it's important to address that Harry and Ginny's relationship is drastically different in the films. For one thing, Ginny doesn't pine after Harry throughout the books like she does in the films.

While she has always had a crush on Harry, Ginny doesn't let her unrequited love consume her (Harry had a lot going on at the time). Instead, she moved on, dated other guys (Dean Thomas, go Ginny), and lived her life. The movies also show Ginny doting over Harry and behaving like a mom around him, while book Ginny treats Harry as she would anyone else — sass and all. Book Ginny compliments Harry well because she is a fully-developed character who doesn't fall in the shadow of the Golden Boy like film Ginny does.

4. Ginny Stands Up for Herself

While Ginny is lucky enough to have six older brothers willing to stand up for her at a moment's notice, she has proven time and time again that she doesn't need them to protect her. The only Weasley daughter knows how to stand up for herself and for her friends when the time comes. The movies hint at Ginny's caring nature, but they don't show how vocal and ready to take action she is at all times.

In the films, Ginny isn't even around enough to be picked on very much, and when she is, her comebacks are so diluted and cut short it's like she's a completely different character. The books showcase Ginny as a powerful witch filled with just as much fire as her mother was when she took down Bellatrix Lestrange. She doesn't take sass from anyone and makes a point of demonstrating her willingness to fight/defend herself at anytime (look out for those bat bogey hexes).

5. Ginny is a Great Friend

If you've only seen the films (they are pretty incredible), you might not know that Ginny was actually a fantastic friend to Hermione in particular. As an only child and the only girl in the Golden Trio, Hermione didn't have very many other girls to hang out with. Luckily, Ginny was there for her and vice versa. Hermione gave Ginny advice that none of her brothers could, and the two swapped secrets about love, relationships, and anything that they just couldn't share with their male friends.

For readers of the books, this relationship between the two witches was clearly missing from the film adaptations, failing to show the audience that Ginny was more than just Ron's little sister who followed them around because she liked Harry. She was a genuine friend to the entire group and a crucial character in the books who added a layer to the story that Chris Columbus and David Yates just didn't capture.

6. Ginny Faces Her Own Battles

Ginny faces Voldemort related troubles from the moment she steps foot in Hogwarts. In her very first year, poor Ginny is possessed by Tom Riddle and dragged into the Chamber of Secrets where she nearly dies, all of which she so casually has to remind Harry about at one point because he had the convenience of forgetting about it. This was a huge, traumatic moment in Ginny's life and affected her entire character afterwards, opening her eyes to the severity of Voldemort's threat to the wizarding world and forcing her to grow up more quickly than many of her peers.

Not only that, but she still managed to become a fantastic quidditch player and even substitute for Harry when he couldn't play for one reason or another. She also put up with having to stay behind at Hogwarts while the people she loved most went out to fight the biggest threat to the wizarding world, and she still managed to help lead a resistance alongside Neville Longbottom. How much more amazing can one girl get?

Despite what the films might lead you to believe, Ginny was anything but a minor character in the original Harry Potter books. Not an official member of the Golden Trio, Ginny doesn't go with the on all of their adventures to fight the Dark Lord (because Harry begs her not to for her safety). Still, she doesn't waste any time in continuing Dumbledore's Army — which she is a part of despite being a year younger than everyone else — alongside Neville, and she helps other witches and wizards harness their powers to fight Voldemort.

She is there for anyone who needs her and is present in a way that makes her crucial to the story, which the films somehow manage to wash away. Ginny is far more than the romantic plot device she appears to be in the films. She plays a key role in the Battle of Hogwarts and in helping her friends save the wizarding world. She is a loyal friend, a powerful witch, and Ginny Weasley is a vital character who should not be overlooked.

I know this is a topic many Potter fans have discussed at great length, but I will never get over how one of my favorite literary characters has been immortalized by an albeit wonderful film series as "Harry Potter's girlfriend" or "the girl Weasley." Hopefully, fellow readers of the series will remember just how much of a boss witch Ginny Weasley's really is, and that she was a powerful character in her own right. After all, she did survive being possessed by Voldemort and help save the wizarding world.