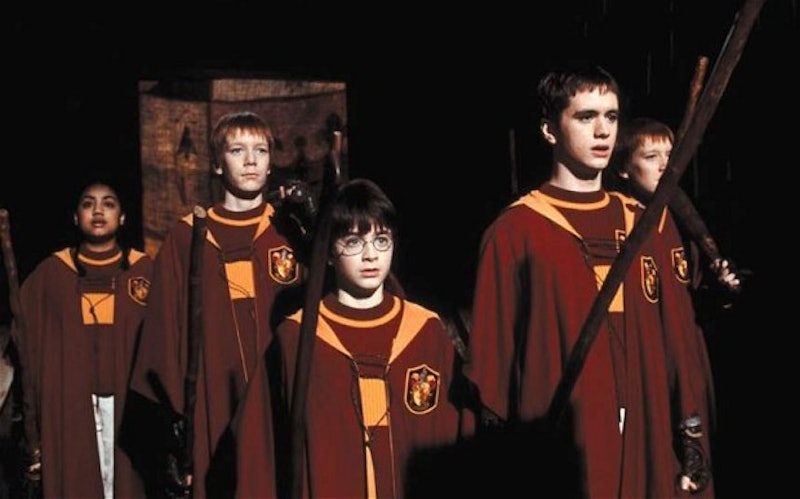 I think about Harry Potter a lot. Like, a lot a lot. But while I'm prone to pondering hidden symbolism in the books, or searching for fan theory or characters' backstories online, I don't often ask myself a deceptively simply question: what's my favorite part of Harry Potter?

When you're a Harry Potter fan, picking a favorite scene can be like picking a favorite kid. Of course you love the scene when Ron and Hermione finally kiss during the battle of Hogwarts, but what about when Dumbledore's Army holds its first meeting in the Room of Requirements? Or when Harry gets on a broom for the first time and becomes Hogwarts's youngest Seeker? When all seven books helped shape your formative years, it seems almost wrong to show favoritism to certain scenes.

But, just like your parents secretly have a favorite child, you know there are parts of the series that you can't help but love more than the others. Of course, which scenes you consider the best may be different from the ones I consider the best, but I think that there are certain scenes that hold special places in the hearts of a lot of fans. Subjectivity aside, I've compiled a list of seven scenes that I personally think are some of the best in the series. Disclaimer: I chose to focus on scenes that leave me feeling happy and hopeful about the world, as opposed to some brilliant but darker scenes ("Always," anyone?). And yes, I do consider Molly Weasley kicking Bellatrix's butt happy.

He pulled out of his dive, his hand in the air, and the stadium exploded. Harry soared above the crowd, an odd ringing in his ears. The tiny golden ball was held tight in his fist, beating its wings hopelessly against his fingers.Then Wood was speeding towards him, half-blinded by tears; he seized Harry around the neck and sobbed unrestrainedly into his shoulder. Harry felt two large thumps as Fred and George hit them; then Angelina, Alicia and Katie's voices, "We've won the Cup! We've won the Cup!" Tangled together in a many-armed hug, the Gryffindor team sank, yelling hoarsely, back to earth.

With a few exceptions I'm not a huge sports fan, so even magical sports played on brooms couldn't really hold my attention. So my reason for liking this scene is twofold: After two books of reading about Gryffindor winning Quidditch matches only to have the Cup elude them because of some kind evil magic (an evil wizard living on the back of some guy's head tries to kill Harry and then that same evil wizard kidnaps Ginny Weasley), it was nice that the team's hard work finally paid off. But more importantly, it gave me hope that now that the Cup was won I wouldn't have to read about so many freakin' Quidditch matches anymore.

But Dobby didn't move. He was holding up Harry's disgusting, slimy sock, and looking at it as though it were a priceless treasure."Master has given Dobby a sock," said the elf in wonderment. "Master gave it to Dobby.""What's that?" spat Mr. Malfoy. "What did you say?""Got a sock," said Dobby in disbelief. "Master threw it, and Dobby caught it, and Dobby — Dobby is free."

Admit it, you have a soft spot for that weird little house elf. How can you not? Dobby is almost as obsessed with Harry as we are, and all he wants to do is help out his favorite wizard. Plus, Lucius Malfoy is such a jerk, I hate thinking of poor Dobby having to live there and clean up after a bunch of abusive, dark wizards. So when Harry tricks Lucius into freeing Dobby with a grimy old sock, I had to cheer. Dobby is a free elf!

Harry and Ron both made furious moves towards Malfoy, but Hermione got there first and - SMACK!She had slapped Malfoy around the face with all the strength she could muster. Malfoy staggered. Harry, Ron, Crabbe and Goyle stood flabbergasted as Hermione raised her hand again.

While we all acknowledge now that Hermione is Queen, her feistyness had to start somewhere. You could argue that it started in an earlier book or that it existed from day one, and I won't argue with you. For me, however, Hermione grew from a smart little duckling to a take-no-prisoners swan the day she finally she decided that she had had enough of Malfoy's crap. Rather than have to hear another stupid thing he said, our lovely heroine decided that this was one of the rare occasions when brawn needed to triumph over brain, and she socked him in the nose. And it was glorious.

"STOP THEM!" shrieked Umbridge, but it was too late. As the Inquisitorial Squad closed in, Fred and George kicked off from the floor, shooting fifteen feet into the air, the iron peg swinging dangerously below. Fred looked across the hall at the poltergeist bobbing on his level above the ground."Give her hell from us, Peeves."And Peeves, whom Harry had never seen take an order from a student before, swept his belled hat from his head and sprang to a salute as Fred and George wheeled about to tumultuous applause from the students below and sped out of the open front doors into the glorious sunset.

I love me some Weasley twins, and they have a bunch of great scenes to pick from. But my personal favorite is their dramatic departure from Hogwarts, leaving a magical swamp and a fuming Dolores Umbridge in their wake. Of course these two show-offs weren't going to leave Hogwarts without making a scene, and what better way to leave your mark on your school than to leave behind a magical mess that won't disappear and ask a trouble-making poltergeist to continue to raise hell in your absence? These two have style.

"There are all kinds of courage," said Dumbledore, smiling. "It takes a great deal of bravery to stand up to our enemies, but just as much to stand up to our friends. I therefore award ten points to Mr. Neville Longbottom."Someone standing outside the Great Hall might well have thought some sort of explosion had taken place, so loud was the noise that erupted from the Gryffindor table. Harry, Ron, and Hermione stood up to yell and cheer as Neville, white with shock, disappeared under a pile of people hugging him. He had never won so much as a point for Gryffindor before.

I love new super hot Neville Longbottom as much as the next fan, but there will always be a special place in my heart for chubby, nerdy young Neville. When we meet Neville in the first book, he's a far cry from the snake-killing hero of Deathly Hallows. Instead, he's forgetful and often left out, and his most courageous act is trying to stand up to his friends when they're attempting to get themselves in some kind of trouble. So it's extra gratifying when Dumbledore rewards this small act of courage by giving Neville just enough points for Gryffindor to win the House Cup. Honestly, this scene still kind of warms my heart when I think about it.

Maybe it's just nostalgia, but something about this scene will always make my heart jump with joy. After pages of reading about poor Harry's abuse at the hands of the dastardly Dursleys, Hagrid barges down his door in the middle of the night, hands him a birthday cake, and proclaims him a wizard. I've been dreaming of this exact same thing happening to me ever since I was 9, and reading this scene takes me back to the first time I ever read Harry Potter. This scene starts Harry's, and by extension the reader's, amazing magical journey. How can it not be one your favorite scenes?

He changed courses, running at Bellatrix rather than Voldemort, but before he had gone a few steps he was knocked sideways."NOT MY DAUGHTER, YOU BITCH!"Mrs. Weasley threw off her cloak as she ran, freeing her arms. Bellatrix spun on the spot, roaring with laughter a the site of her new challenger."OUT OF MY WAY!" shouted Mrs. Weasley to the three girls, and with a swipe of her wand she began to duel.

You knew this was coming, right? Hasn't the universe agreed that this was hands-down the best moment of the entire series? Known as the lovable yet slightly terrifying matriarch of the Weasley family, Molly was tough but maybe not my first pick if I needed help in a fight. But, when Ginny is threatened during the battle of Hogwarts, Molly decides that it's time to stop messing around and brings it. I'm not which part was cooler: her amazing battle cry or the fact that she single-handedly ended the insane and deadly Bellatrix Lestrange. The award for badass witch of the series goes to Molly Weasley, hands down.

More like this
Harry Potter's Viktor Krum Has Undergone A Huge Transformation Since Hogwarts
By Sam Ramsden and Meguire Hennes
Viserys’ Fate On 'House Of The Dragon' Could Differ From The Book In This Surprising Way
By Grace Wehniainen
Read The First Pages Of Emma Rosenblum’s Highly Anticipated Debut, 'Bad Summer People'
By Samantha Leach
What Joyce Carol Oates Knows About Fame
By Erin Somers
Get Even More From Bustle — Sign Up For The Newsletter