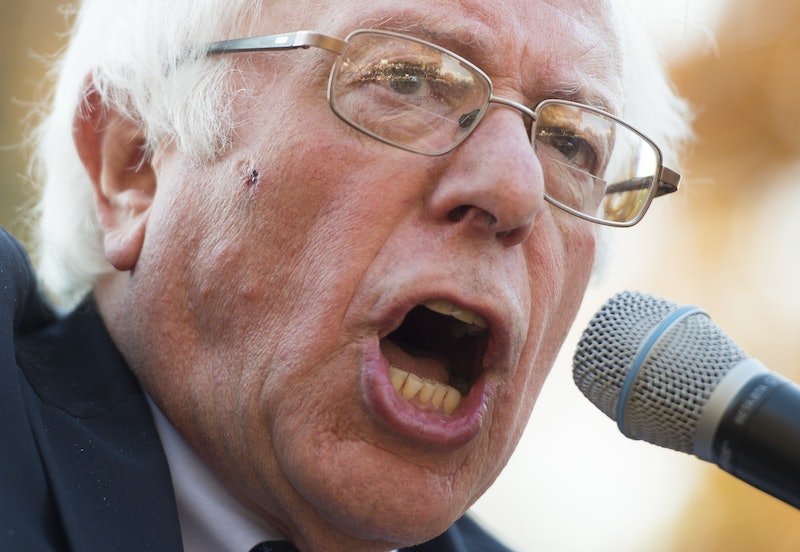 Many democrats took the news of Secretary Clinton's presidential loss hard. Not only were the vast majority of polls wrong in forecasting who would win, Clinton also lost to the most divisive and disliked presidential candidate in modern history. So it's natural for liberals and progressives to look for some route around a Donald Trump presidency, and thus comes the idea of electing Bernie Sanders through the 12th Amendment. And while this election has been unpredictable (to say the least), the simple fact is that the odds of Sanders being sworn into the presidential office come January are about as high as Honolulu getting a white Christmas.

Out of the 27 Amendments, the 12th is one of the most ignored. For starters, it only has any relevance once every four years, due to its focus on rules for electing the president. Remember all those stories about the electoral college and that magical winning number of 270? Yeah, that comes from the 12th Amendment, which stipulates that a candidate must garner a majority of electoral votes in order to become president. Donald Trump currently has 306 electoral votes, so barring a recount that reveals monumental vote shifts to Clinton in Michigan, Pennsylvania, and Wisconsin, Trump looks set for any easy cruise to the Oval Office.

There are a few wild scenarios that, technically speaking, fall within the realm of possible, all involving the 12th Amendment. For one, electors could simply refuse to cast their ballots for Trump. In fact, there is a movement to encourage just that, begun by Colorado elector, Michael Baca. He's now taken his efforts one step further, by filing to form a group with fundraising capabilities, called the "Hamilton Electors." Baca doesn't really think his efforts will be successful, though one Republican elector has agreed to refrain from voting for Trump, and apparently four others are considering the same.

If, somehow, enough electors defected to deprive Trump of his needed 270 votes, then the process moves to the House of Representatives. There, each state gets one vote to cast for the president, but they must choose amongst the top three contenders. That means the race would be between Trump, Clinton, and Libertarian Party candidate, Gary Johnson. There's still no room in this scenario for Bernie Sanders to become president. Not to mention that the House of Representatives, controlled by Republicans, would almost certainly choose Trump as president (he is their party's candidate, after all).

So even if all the implausible and absurd electoral scenarios do unfold, Bernie fans will still have to wait until 2020 for another shot at electing their favorite Vermonter to the presidency.