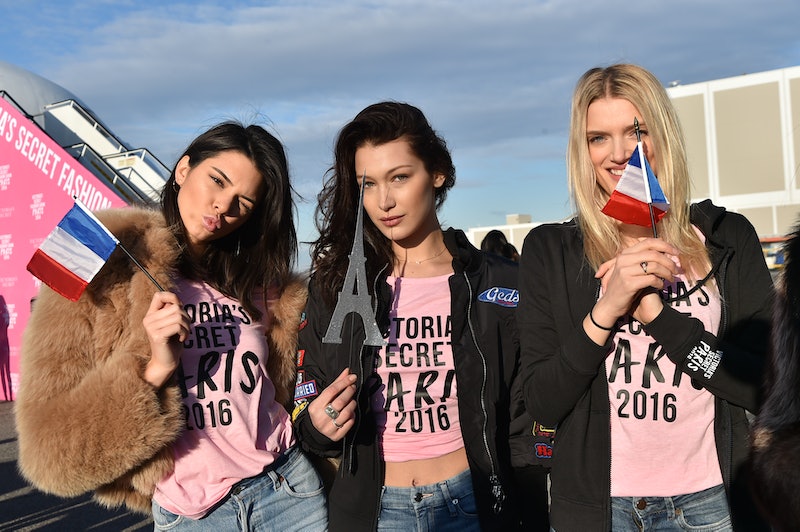 Sometimes in Hollywood it's hard to keep track of who is friends with each other. And if you're a fan of the fashion world or young Hollywood, you may be wondering, "Are Kendall Jenner and Bella Hadid friends?" It's a valid question, especially since it's no secret how close Jenner and Bella are with Gigi Hadid. Obviously, Bella and Gigi are sisters, so it's no wonder they are super tight. As for Jenner, well she and Gigi not only model together, but travel and hang out non-stop. Which brings me back to the question posed above, because some of you may be questioning if Bella and Jenner get along as well as they do with Gigi. The answer? It is a definite yes. Let's just say they share an immense amount of love for each other.

Whether they are working a modeling job side by side, walking the runway at the Victoria's Secret Fashion Show, taking luxurious vacations, relaxing at home, or just going out to eat like BFFs do, Jenner and Bella have an admirable friendship. They appear to be all about love and support for each other in all areas of life.

So with that said, here are a few examples that perfectly describe Bella and Jenner's friendship. Warning: you may become envious by the end. Seriously, when isn't a Jenner and a Hadid causing envy with their lifestyles, careers, and friendships? They're really good at that.

They Encourage Each Other's Eating Habits

After the 2016 Victoria's Secret Fashion Show, they went out to grab a bite to eat. Apparently, Jenner was super hungry and Bella couldn't help but capture it on Snapchat. She also tweeted about it and said, "kendall just stuffed face [burger emoji]." That she did and Bella rooted her on, too.

They Really Get Into Sporting Events

This is how they do a Los Angeles Lakers game.

They're Snapchat Game Is On Point

They Take The Best Photos With Gigi

This is true friendship.

They Do The VSFS The Right Way

They had a blast.

They Love Dining Out Together

There is no better way to catch up with friends than over a bite to eat — and of course at Nobu, a Kardashian/Jenner hotspot.

They Go To The Races

In May 2015, the Hadids and Jenner attended the Grand Prix in Monaco. Of course, they captured it all on social media.

They're All About Supporting One Another

While chatting with Glamour in August, Bella commented on Stephanie Seymour's remarks to Vanity Fair in June, where she said Jenner and Gigi needed their own title and suggested "B*tiches of the moment!" Like the good friend she is, Bella defended her sister and BFF by saying, "It’s crazy. I’ve worked with Stephanie before and loved her; she was sweet to me. I don’t know if she meant it in that mean way." Bella added, "But even so, it’s still hurtful. My sister and Kendall work their asses off. We’re all working hard. You just have to let your success speak for itself…because at the end of the day, we’re making our money."

They Love To Chill In Hotel Rooms

In a 2016 interview with Grazia, Bella dished about the last time she hung out with Jenner, Hailey Baldwin, and Gigi. "I feel like we’ve all been working so much, I don’t remember. I think it was last time we were in Paris. We were all in just a hotel room and we just sat and talked and ate food and sat on the floor and pretty much did nothing!" That sure sounds like a perfect night.

They Take Fabulous Trips With Each Other

Yeah, Bella and Jenner's friendship is pretty much amazing.