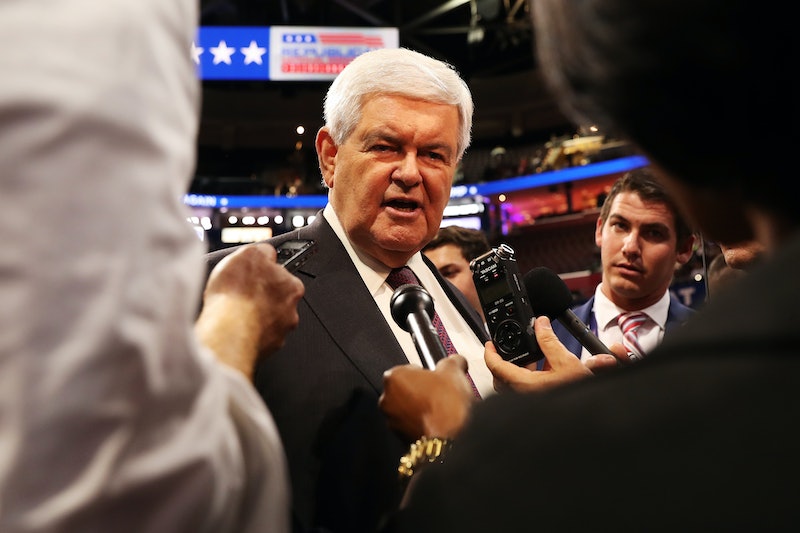 Newt Gingrich doesn't like Mitt Romney, and he doesn't care who knows it. Speaking with conservative radio host Laura Ingraham on Nov. 30, Gingrich continued on his now weeks-long media blitz against the former governor. Gingrich said he'd never seen anyone "suck up" the way Romney had, and he even knocked the potential Secretary of State nominee for knowing French. "He could help them with the menu. He could say, ‘Ahh, Mr. President-elect, this would be the prefect le meal for you," said the former House Speaker. Mocking someone for the crime of speaking a second language isn't typical behavior for a national figure like Gingrich. But compared with other asinine and immature insults from Trump surrogates, Gingrich doesn't even earn the Top Mean Boy slot.

The 2016 election broke the dam of public politeness. And Donald Trump is the one to thank for that, from weaponizing his Twitter account to bully opponents to openly mocking everything from Carly Fiorina's face to Serge Kovaleski's disability. His media mouthpieces, many of them former politicians with no real record of brazen unkindness, seemed to take on their boss' juvenile persona as the election wore on.

Here, in no particular order, are just a few members of Trump's "mean boy" clique:

Where to begin with Trump's former campaign manager? There's the time he allegedly physically assaulted a female reporter. Or that other time Lewandowski reportedly called a former coworker a "f*cking b*tch," according to The Daily Beast. But I'll focus on just his most recent example of jerk behavior, wherein Lewandowski demonstrated he never really moved beyond the middle school mode of interaction.

After Donald Trump was announced the winner, Lewandowski turned to his CNN co-panelist, Van Jones, and told him to "say it again," with "it" being the words "you won." Watch below, but viewer beware: memories of 12-year-old bullies will resurface. Jones stays the adult in the room, calmly schooling Lewandowski by saying, "You're being a horrible person right now."

The former governor is also a former pastor, and had fostered a media persona of "polite, Southern nice guy." Then along came Donald Trump. The two were initially opponents, as Huckabee threw his hat in the ring of 17 Republican primary contenders. But after he dropped out, Huckabee quickly joined the Trump Train, and after riding along for several months, it seems Huckabee has had much of his attitude corrupted by proximity to the boss. Commenting on the swanky dinner Romney and Trump shared, Huckabee said that "On Mitt Romney's plate, there was a big, big slice of crow." Lovely.

Earlier this year, after a leaked video showed Trump saying he could grab women "by the pussy," Huckabee defended his main man. He described fellow Republicans as "bed-wetting" for denouncing Trump's comments, which is not exactly the terminology one might expect from a politician who's been in the game for decades.

Gingrich's on-air tantrums are becoming legendary, such as the aforementioned rant about Romney. Gingrich earlier told the Wall Street Journal that he just didn't "get" Romney, calling him "pathetic" and "weird." But perhaps the most egregious of Gingrich's episodes of immaturity was his epic projection of Trump's many public moments involving sex onto Megyn Kelly, accusing her of being "fascinated by sex" for voicing concern about Trump's behavior towards women. See it to believe it:

Steve Bannon is smart — he graduated from Harvard, worked for Goldman Sachs, and has become a wealthy individual. That doesn't mean he's emotionally mature, and it certainly hasn't precluded him from childish stereotyping, not to mention starting a site that appeals to the "alt-right." The best example of Bannon's capacity for the juvenile is demonstrated in his employment of the term "dyke" to refer to liberal women, with whom he clearly has an enormous hangup.

The CNN contributor accomplishes what Lewandowski could not: provoking Van Jones to raise his voice. Lord has a seemingly nice demeanor, but don't be distracted from how he takes the obvious points Jones makes about Trump "playing footsie" with the KKK, and tries to turn the discussion into a debate on the "leftist" roots of the terrorist group. He's obsessed with his own point of view, unable to listen to anyone else, and refuses to let someone else speak — that doesn't sound like typical characteristics of a mature adult to me.

As Kevin Baker pointed out in Politico, Giuliani had built a reputation for himself of a commitment to justice, taking down mob families in New York City, as well as corrupt Wall Street bankers. He even managed to win the approval of the New York Post and The Village Voice, at the same time. Talk about impressive! But sadly, Giuliani went full-Trump, and ever since he's been blaming Clinton for the rise of ISIS, picturing her in a prison jumpsuit, and yelling about "Greatness."

The New Jersey governor prides himself on "telling it like it is," which kind of makes him a natural Trumpster by default. His brutal takedown of Marco Rubio in the New Hampshire Republican primary debate didn't earn him much praise, and was quickly dubbed a "murder-suicide pact" for the brutal approach it portrayed Christie to have.

Nothing changed after Christie joined Team Trump. Joseph McQuaid, the publisher of New Hampshire's Union Leader, said that Christie had promised him he would never endorse Trump. (McQuaid later said he regretted endorsing Christie.) Christie denies he ever made such a promise.

Look, water seeks its own level. Maybe everyone shouldn't have been so shocked when Christie endorsed Trump.

All these men are people, with families and personal lives, and I really have no doubt they can appeal to some people in private. But the public doesn't get to see any of that, so it's a shame that they seemed to think that supporting Trump meant they had to ape his bullying style. It's been one long, regressive rode back to prepubescence, and it's just not a good look for grown men over the age of 50.