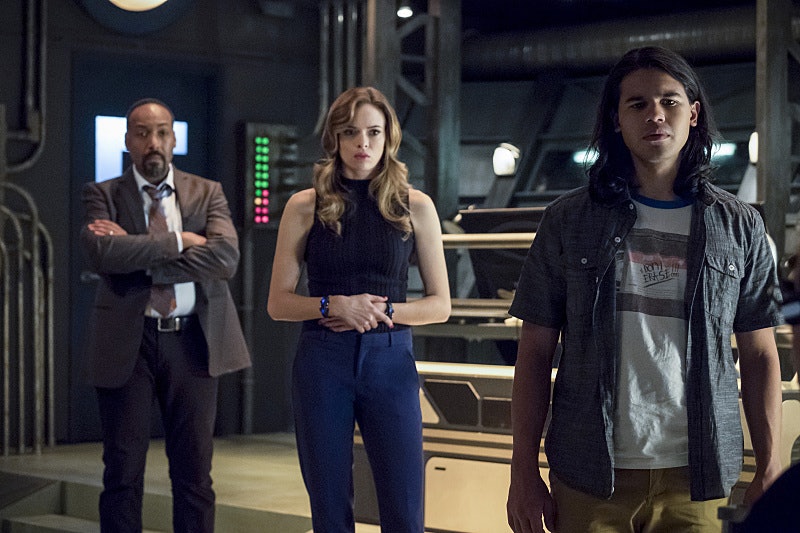 Oh, Barry Allen, what have you done? The Flash Season 3 has shown us the consequences of Barry creating "Flashpoint" — an alternate timeline that has affected the lives of the people he loves, and for the most part, not in a good way. Most of the first half of the season has been about Barry and the team dealing with this fallout, while also (obviously) dealing with all the baddies that have made their way to Star City. But with the midseason finale airing on Dec. 6, the post-Flashpoint world could be even more dire when The Flash comes back from its winter hiatus.

Though the series will surely leave us with a giant cliffhanger, the good news is, thanks to The CW's meticulous scheduling, we already know when it'll return. According to TV Guide, The Flash will be back by Tuesday, Jan. 24, when it will be joined by Legends of Tomorrow. That's not too far away, right? Right? OK, maybe it's not coming back as quickly as it would if Barry were running through time, but while we wait, we can think about what we want to see when the show returns. With the addition of Flashpoint and the fact that the CW crossover opened up a whole new world of possibilities in terms of the dangers that could come to Star City, there are many storylines that The Flash could explore in the second half of Season 3.

I don't want to see Caitlin become evil, by any means — I like her too much. But I'd love to see Killer Frost make some sort of comeback where Caitlin would really get to balance her powers between good and evil. I know we got one episode of that, but it wasn't enough! There's so much more story to be explored.

Barry and Iris have already proven that their relationship is meant to be, no matter what timeline they're in. But with Iris being a little wary of Wally discovering his powers whereas Barry embraces it, there's bound to be some conflict between them. Plus, even though Iris was probably the least affected by Flashpoint, I'm wondering if we'll see her push back at Barry at some point later, when things go wrong. I mean, Barry's a great boyfriend, but sometimes, he's really reckless.

The Return Of Julian

Tom Felton owned his role of Julian Dorn, Barry's CSI counterpart in the Flashpoint world, and perhaps this is one of the better outcomes of his timeline change. Julian was the antagonist we were looking for — snarky, cunning, driven, and jealous, and it had nothing to do with Barry being The Flash. It was refreshing to see Barry connect with Julian as a friend and a coworker, despite this animosity, and I really want to see more of it.

One of the brightest spots of the season so far as been watching the newest incarnation of Harrison Wells, HG Wells, try to fit in with the Flash team. Whether he builds a museum, writes a book, or just saves the world after all, I want the second half of the season to show more of his story.

The Dominators Aren't Done Yet

The four-night superhero crossover brought together all of The CW's biggest heroes to fight aliens called The Dominators, who came to Earth looking to control it. Here's some interesting trivia: in the DC comic world, the Dominators were an enemy of the Legion of Superheroes, where they killed children Barry Allen had. Will the Dominators have lasting ramifications on the Flash world? It would certainly be an interesting road to go down and add some intriguing conflict.

No matter what turn the rest of Season 3 takes, it's clear The Flash will have plenty of exciting storylines that we can look forward to. 2017 can't come fast enough.

More like this
'The Flash' Officially Ends Its Run With A Shortened Season 9
By Brad Witter
Does 'Locke & Key’s Ending Mean There Could Be A Season 4?
By Sophia Moore
'The Sandman’s Ending Is A Departure From Neil Gaiman’s Comic Book Series
By Kadin Burnett
Every Horror Movie Reference In The 'PLL: Original Sin' Premiere
By Alyssa Lapid
Get Even More From Bustle — Sign Up For The Newsletter