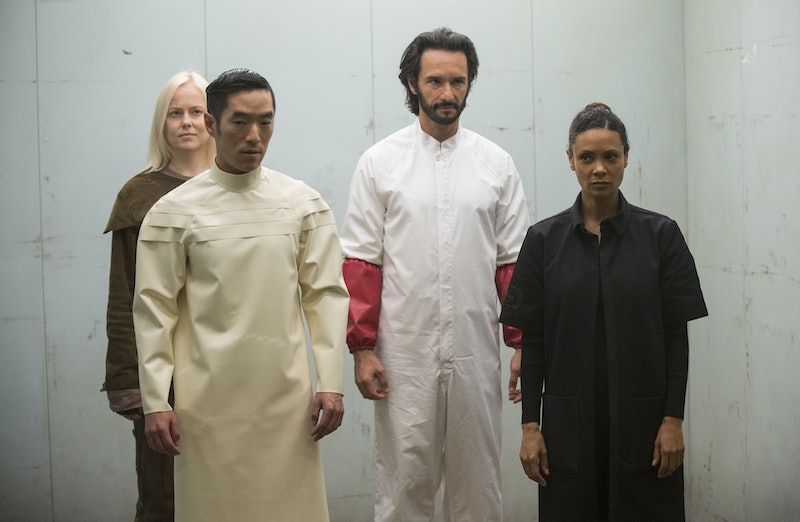 Thankfully, HBO decided to put us all out of our misery and finally renewed Westworld for Season 2, so we wouldn't have to watch this Sunday's Season 1 finale in agony, not knowing whether or not the show would be returning for more episodes. Now we can sit back and relax, allowing the many mysterious of the trippy sci-fi series to wash over us in relative peace of mind… and then spend hours (and days, and months) theorizing over the new mystery in front of us: namely, what will happen in the show's sophomore season? Thankfully, we already have a few juicy Westworld Season 2 spoilers to help tide us over throughout what will undoubtedly feel like a very long hiatus.

Of course, husband-and-wife showrunners Jonathan Nolan (Memento) and Lisa Joy (Pushing Daisies) are remaining very tight-lipped about specifics when it comes to plot and which characters may or may not live to see a second season. But this is the age of the internet, so there are always details that find their way out into the world… and from everything we've learned about Season 2 so far, it seems like Westworld is just going to keep getting better and better. If it does, there's no telling how big of a phenomenon it may become — it's already getting better ratings than Game Of Thrones did in its own freshman season, and look what happened to that show.

In anticipation of the Season 1 finale, "The Bicameral Mind," here are the six most important things to know about Season 2:

1. They Already Have It Mapped Out

Production on Season 1 of Westworld was famously halted in January of this year, causing some people to question whether the show was in trouble before it even began. But according to star James Marsden's interview with Entertainment Weekly, the hiatus happened so that the writers could catch up with the swiftly-moving production and write not just the rest of the scripts for the first season, but the whole master plan for the rest of the series. "It wasn’t about getting the first 10 [episodes] done, it was about mapping out what the next 5 or 6 years are going to be," Marsden (who plays cowboy Teddy Flood) told the magazine. "We wanted everything in line so that when the very last episode airs and we have our show finale, five or seven years down the line, we knew how it was going to end the first season."

2. It Will Be A New Chapter In The Story

The biggest fear surrounding shows with big mysteries at their cores is that those central questions will never be answered, satisfactorily or otherwise. (The unsolved mysteries and still-lingering plot threads are the main reason some viewers still harbor resentment over Lost.) So if you're afraid that all of your questions about Westworld Season 1 won't be addressed in Sunday's finale… well, don't be. "We weren’t interested in spinning out mysteries with no answers in sight. Our goal is to tell an ambitious story in season-long chapters, each with a distinct feel and theme.” Nolan told EW in a separate interview. Joy then added, "Most of the questions viewers have will be resolved in the final episodes, except for the most important one: What happens next."

3. Things Will Move At "Warp Speed"

One complaint about the freshman season of HBO's newest show is how slow it was to really get started. But if the deliberate pace bothered you, then star Evan Rachel Wood (Dolores Abernathy) doesn't think you'll have a problem with what's coming next. "I know a little about what’s coming in Season 2," she teased to IndieWire. "I know how our ending for Season 1 will segue into Season 2 and… wow. That’s all I can say. I think it was always that Season 1 was going to be this backstory and set up — getting to know the park and characters. I think Season 2 is really going to be warp speed. The show might really start in Season 2."

4. All Your Host Questions, Answered

Getting a little more specific about what Season 2 will actually be about, Nolan hinted to EW that the show will start getting even more in-depth about what actually makes the park's hosts tick. "Their construction and their power source is something we’re really going to get into during season 2. So we’d like to keep that mysterious," the showrunner explained when asked about the androids' mechanics. "They’re closer to biological than they are to mechanical, but they don’t suffer brain death the same way we do. They’re largely indistinguishable from a human beings, but their brains don’t require oxygen — which opens up interesting possibilities." Does that mean what I think it means? Robots underwater or, more intriguingly… robots in outer space??

5. The Man In Black Will Return

In her interview with IndieWire, Wood confirmed that she would indeed be a part of the show's second season. That's not so surprising, considering she's the top-billed star, that her character's emotional journey has been one of the show's core storylines so far, and that Dolores is basically immortal anyway. What is mildly more surprising is the fact that actor Ed Harris (the mysterious Man In Black) let slip in a BBC radio interview that he would also be returning for Season 2. "They’re going to do 10 more episodes, and I will be involved," he confirmed." Given the fact that the Man In Black is a mere mortal, this was far from a sure thing — but I guess we know that he'll make it through the Season 1 finale relatively unscathed.

6. The Wait Will Be Excruciating

If any or all of this has gotten you super hyped about next season… well, then I'm very sorry, since you're going to have to wait a really, really long time to see it. Thanks to the demands of the show's lavish production values, we probably won't be seeing Westworld Season 2 until 2018, as HBO programming president Casey Bloys spilled to The Hollywood Reporter after he officially renewed the show. "Because the production is such a big endeavor, I don't exactly know when [it will premiere] yet. I can't speculate other than to say it'll either be '17 or '18. Probably more like '18 [but] we're a year away, so let's see how it goes."

If Season 2 doesn't premiere until 2018, hopefully it will be in one of the earlier months rather than two full years from now. But either way, the wait is going to be absolutely excruciating… and these spoilers only made it even worse. You're welcome.