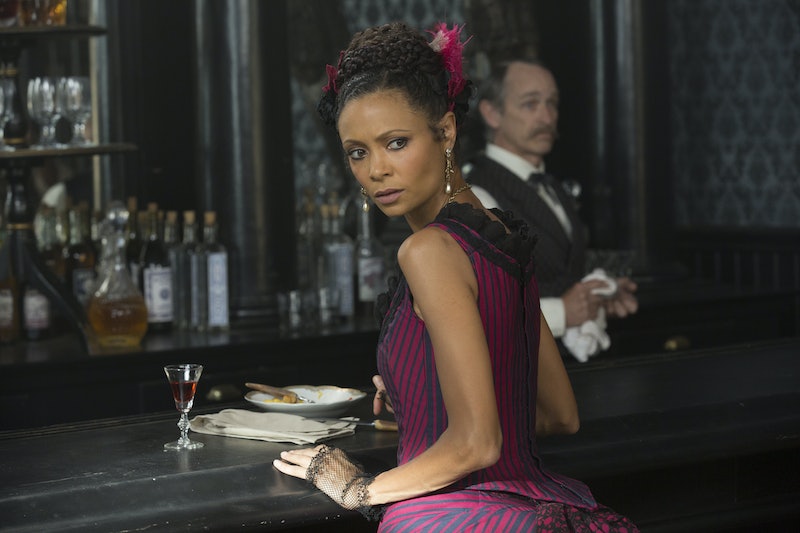 Have you ever questioned the nature of your reality? Well, you're definitely about to, since HBO is delivering us a doozy of a good-news-bad-news double whammy that'll make your head spin. First up, the good news: HBO has officially (and finally!) picked up its bonkers Western/sci-fi robot drama for a sophomore outing. That's right — Westworld is renewed for Season 2, ladies and gentlemen. Now for the bad news: the network's programming president Casey Bloys is here to rain on our parade by informing us that Westworld Season 2 likely won't premiere until sometime in 2018. You read that correctly. Two-thousand-and-eighteen.

When asked by Entertainment Weekly when viewers could expect the next batch of Westworld episodes to be ready, Bloys dropped the bombshell:

My suspicion is sometime in 2018 because of how big the world is and what goes into shooting it. So I don't have a date exactly — they're going to have to map it out and write the scripts — but my guess is sometime in '18.

What the heck? 2016 has already been the worst year on record by just about any conceivable metric, and now HBO's gotta hit us with this while we're already reeling? So rude.

So why the delay? Remember, this isn't the first time that the show has hit an apparent snag. Earlier this year, production on Westworld was halted for several months to give creators Jonathan Nolan and Lisa Joy time to complete work on the final four scripts of the season before the shooting schedule caught up with them. Nor is the freshman series the only HBO drama that's testing its fans' patience with a longer-than-average wait time between seasons. The network also delayed Game Of Thrones Season 7 so the production team could wait to film the new episodes during winter rather than the summer.

But why a second postponement for Westworld specifically, beyond Bloys' vague talk of "how big the world is"? More than likely, it's just a case of HBO being extra cautious after the recent failure of their last new drama, Vinyl which was renewed for a second season shortly after its premiere… and then unceremoniously cancelled after the rest of the season failed to live up to expectations, creatively or commercially. Given that the network doesn't yet have another high-profile drama to take GoT's place when it ends after two more shortened seasons, HBO can't afford for Westworld to pull a Vinyl.

The network's reputation aside, I mean that literally as well: they probably can't afford for Westworld to fail, financially speaking. The first season of the drama reportedly came with a $100 million price tag; the pilot alone cost about $25 million, and then around $8 to $10 million for each individual episode after that. (For comparison's sake, GoT apparently costs HBO "only" $6 million per episode.) After sinking another $100 million into the aborted Vinyl earlier this year, the network will likely do whatever it takes to keep Westworld afloat.

Thankfully, that shouldn't be too much of a problem. According to EW's report, "the series is averaging 11.7 million viewers across all the network's platforms — more than even Game Of Thrones racked up during its first season." And we all know what happened to that show: it eventually grew from its relatively modest Season 1 ratings into the most popular show in HBO history. If Westworld is already pulling in better numbers than GoT did back then, there's virtually no cap for how mind-blowingly massive it could become in the future.

This delay is likely just a result of HBO safeguarding its massive investment in Westworld the show — in the same way that Delos is currently working overtime to safeguard its own massive investment in Westworld the park. Of course, Delos' efforts eventually lead to industrial espionage and murder. Hopefully HBO's efforts will be marginally more peaceful.

And of course, just because Bloys doesn't expect Season 2 to air until 2018 doesn't mean we'll be waiting until this time that year, 24 months from now. I wouldn't expect the delay to be that massive. More likely, Season 2 will premiere sometime in early 2018, perhaps in January or February. That means the wait would only be 14 or 15 months — not that much worse than the average span between seasons. And look on the bright side: that just means even more time to watch the original 1973 movie, its sequel Futureworld, the short-lived 1980 TV show Beyond Westworld, and every episode of HBO's version for the second (or third or fourth) time. Whenever Westworld Season 2 premieres, we'll be ready for it.

More like this
James Marsden Kept Teddy’s Westworld Season 4 Return A Secret “For Years”
By Brad Witter
Everything You Need To Remember Before Westworld Season 4
By Brad Witter
Why Simone Ashley Had To Study Snails For Intimacy Training, Pre-‘Bridgerton’
By Grace Wehniainen
Don't Expect To See Your Fave Modern Royals Depicted On 'The Crown' Season 6
By Jack Irvin
Get Even More From Bustle — Sign Up For The Newsletter