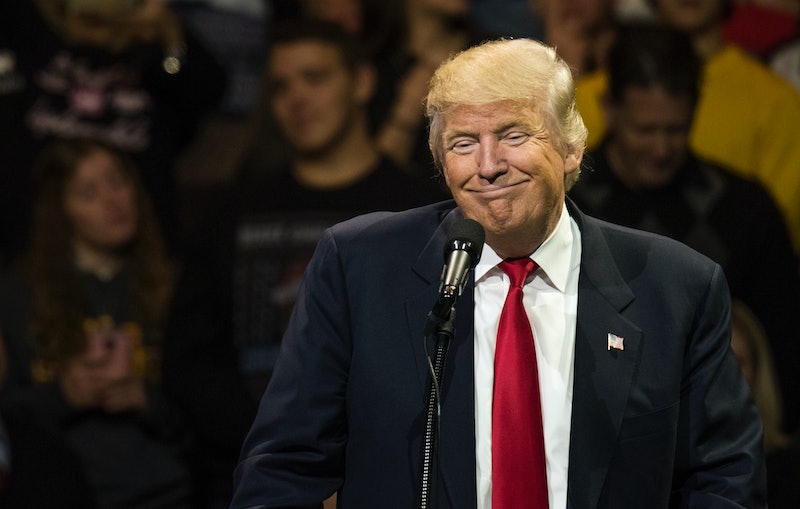 Donald Trump is almost done filling out his cabinet of top advisers, and a common thread between his first string is their wealth. Including his own net worth, Trump's Cabinet's net worth is approaching the GDP of a small country, which is a yuge contrast to the current president. Trump's Cabinet is so much richer than President Obama's that it's a little excessive.

Trump's well-documented obsession with money (there was literally an entire TV show about it) renders his choices unsurprising, but ultimately hypocritical. The final chapter of Trump's campaign was all about "draining the swamp," replacing the business-as-usual Washington order with a new breed of politicians. Yet he here is, appointing financiers and billionaires who are so far removed from the problems of ordinary Americans that it's difficult to believe how they could effectively run a government that really is for the people.

There's something to be said for birds of a feather flocking together — it's entirely possible that Trump legitimately believes that people who have a similar net worth as him will understand him better and be able to better advise him. However, the promises he made to the American people, the ones who are allegedly disenfranchised and forgotten, should matter more than his collection of yes-men. Here are just a few of the wealthy advisers Trump has appointed, and how they match up to their counterparts in the Obama administration.

Secretary Penny Pritzker is the richest member of President Obama's Cabinet, but Trump still somehow managed to beat her net worth of $2.4 billion with his choice of Wilbur Ross. According to Forbes, Ross is worth $2.5 billion, just scooting past Pritzker with an extra $100 million.

Betsy DeVos also lands on the list of richest people in America, with a net worth of about $5.1 billion from her father-in-law's company Amway Global. Meanwhile, current Secretary John B. King was still paying off his student loans in May.

Secretary of Health and Human Services

According to Open Secrets, HHS Secretary Sylvia Burwell is worth about $4.6 million, a lot of money until you compare it to Trump's pick for the position, Tom Price. Price is worth about $13.6 million, approximately 12 times more than his average fellow congressional representative.

The net worth of current Secretary Anthony Foxx was reportedly no more than $175,000 in 2013, while incoming Secretary Elaine Chao is worth around $22 million right now (though the Associated Press suggests that Chao and her husband, Kentucky Sen. Mitch McConnell, could be worth as much as $37 million). That also has the potential to increase substantially due to her father's global shipping business. Although her father James S.C. Chao's net worth isn't readily available, Chao's family gave $40 million to Harvard Business School in 2012, so that should be some indication.

Secretary of the Treasury

Current Treasury Secretary Jack Lew made news for being significantly less rich than some of his predecessors (he's only worth about $6 million, but Trump made sure to return to the status quo. Steve Mnuchin is worth around $40 million from his days at Goldman Sachs and his movie production career.

Whatever Trump's specific motivation for choosing his advisers, it doesn't feel cross-sectional of America, and that's a problem for representing the interests of the middle class and working poor. When government doesn't reflect the interests of the people (as it already hasn't with Trump's Electoral College win), it breeds resentment and distrust. It might not be too long before those who believed Trump's message about upending the political order are just as frustrated with him as they are with "Washington insiders."