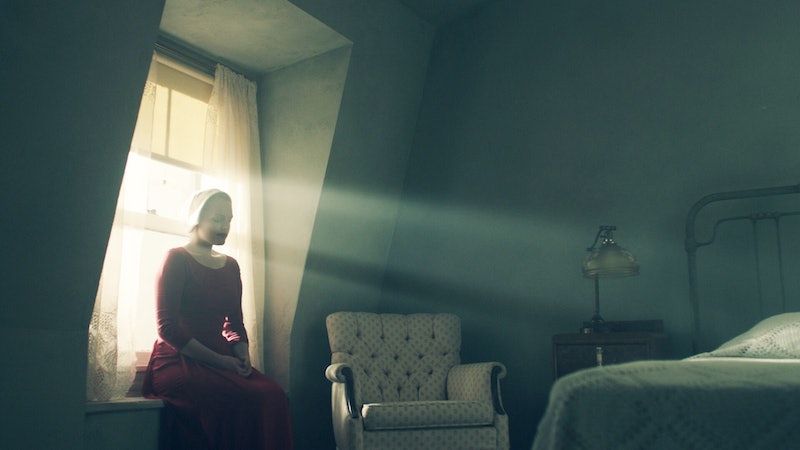 In 2017, Hulu is releasing its most ambitious series yet, The Handmaid's Tale, an adaptation of Margaret Atwood's groundbreaking dystopian novel. The first photos from The Handmaid's Tale have arrived, and they're going to make you start counting down the days until the spring premiere. The haunting tale of the women who live in Gilead, a totalitarian society where birthrates have dropped at an alarming rate with the rise of environmental disasters, is bound to be more prescient than ever before in the current political climate. Each photo presents a harrowing look at life for the women who are used for breeding by the upper class and in the process depicts a story you have never seen on TV before.

The series stars Elisabeth Moss as Offred, a handmaid whose primary goal is to find her daughter, Joseph Fiennes as the Commander whose household Offred resides in, as well as Yvonne Strahovski and Samira Wiley. Offred is forced to navigate Gilead's complex caste system in hopes of gaining any information about the whereabouts of her family. In Gilead, anyone can be a spy, which only makes the stakes all the higher for Offred. The role of Offred is miles away from Moss' iconic role as Mad Men's Peggy Olson. From the first glimpses of The Handmaid's Tale, it seems to safe to say that seeing Moss take on Offred's journey will be just as intriguing as watching Peggy's feminist evolution in the '60s.

Hulu's first look photos all focus on Offred and her fellow handmaids, emphasizing the isolation she must feel and setting the tone for The Handmaid's Tale 's cautionary glimpse at a future where women have lost all sense of autonomy. See all four photos below.

The first photo appears to depict Offred in her room within the Commander's house. Notice how stark the decor is; handmaids are not allowed any luxuries because their homes are not permanent. Their only goal is to become pregnant and give birth to a healthy child for the commander and his wife, at which point they will be moved to another home to do it all over again. Nothing belongs to a handmaiden, not even her body, as Offred's uniform-style red dress attests.

This photo juxtaposes the government control against the handmaidens' total lack of even the most basic of freedoms with chilling accuracy. Notice how none of the handmaids stand out? That is entirely intentional, and it should have goosebumps popping up on your arms.

Fiennes stars as the Commander Offred is assigned to, and this photo depicts the most dehumanizing part of being a handmaid. You can see Offred just behind him on the bed, preparing for the "ceremony" that is meant to lead to a child for the Commander and his wife. In the book, wives are always present when their husbands are with the handmaids so they can feel as if they are part of the process, but't is unclear how much the series will adhere to all of the book's established rules of life in Gilead.

The final image is one of Offred, alone at night, during one of the only moments of true solitude she is allowed.

The Handmaid's Tale is the ultimate story of oppression and dehumanization. In a time when abortion laws are being challenged at an unprecedented rate, and the president-elect's misogynistic attitude toward women can be dismissed as "locker room" talk, Offred and her journey are more important than ever before. Season 1 of The Handmaid's Tale is set to premiere in April 2017 on Hulu.

More like this
20 Photos From The 'Stranger Things' Season 4 Premiere To Make You Feel Old
By Alyssa Lapid
Jesse Williams Is “Not Down” Despite Leaked Images Of His Broadway Nude Scene
By Brad Witter
Sandra Bullock, Girlboss Extraordinaire
By Matt Harkins & Viviana Olen
Kaley Cuoco & Tom Pelphrey Just Made Their First Public Appearance As A Couple
By Hugh McIntyre
Get Even More From Bustle — Sign Up For The Newsletter