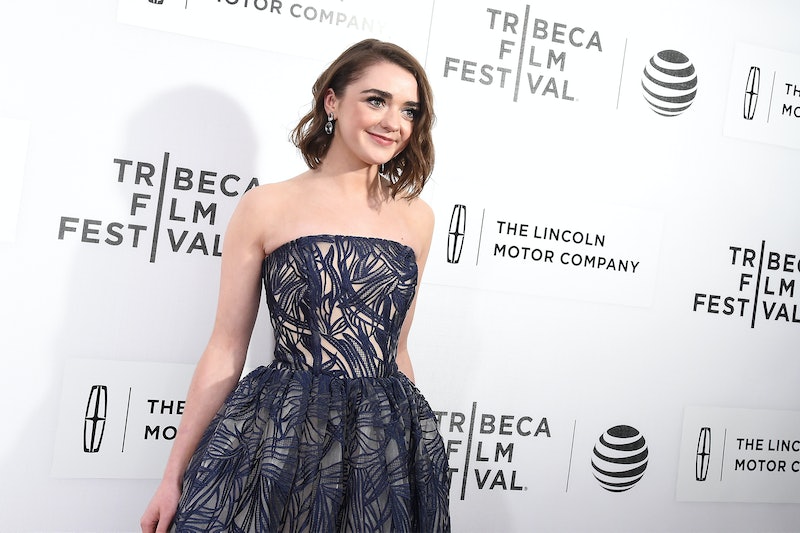 Arya Stark and her list of names have nothing on the passion Maisie Williams has for saving dolphins. The Game of Thrones star has taken to Instagram to document her second trip to Japan, where she is raising awareness about the Taiji dolphin hunt. The horrifying event was first documented by Ric O’Barry in the documentary The Cove , but thanks to the press awareness Williams helped raise, this year's roundup of dolphins appears to have been canceled.

O'Barry is the founder of The Dolphin Project, an organization with an aim to stop the capture and killing of dolphins. Williams is the global ambassador for The Dolphin Project, and in an interview with The Washington Post, the actor explained why she is so passionate about keeping dolphins free and safe. "These animals travel the ocean," Williams told The Washington Post. "That’s what they explore daily. No tank will be big enough. No tank will ever be deep enough, ever be exciting enough."

For the fisherman of Taiji, the dolphin roundup is primarily to gather the most attractive dolphins to be sold to sea shows and aquariums. The rest of the dolphins are slaughtered for meat. It is a heartbreaking practice that even those in Japan reportedly know little about, which is why The Dolphin Project made The Cove available online for free in Japan over the weekend. According to Williams' most recent post from Taiji, the boats did not go out for the hunt this year, which is a major victory for dolphins and their supporters.

Williams' passion for The Dolphin Project is inspiring. As an actor with a booming career that includes a role on one of TV's most popular series, Williams leads a busy life, but she has not let that stop her from fighting for a cause she cares deeply about. She is yet another example of how amazing the next generation is when it comes to being socially and environmentally active. Williams' work with The Dolphin Project is making a real difference in keeping dolphins alive, healthy, and safe in their natural environment.

In addition to protesting the Taiji roundup, Williams is urging her followers do one practical thing to keep these beautiful creatures from being captured and slaughtered: Do not go to marine shows. While it is thrilling to see dolphins up close, there are ways to safely see dolphins in the wild without supporting their capture. Williams herself told The Washington Post she planned to go whale watching while she was in Japan — a wonderful alternative to supporting marine shows. Similar wildlife tours are available to anyone who lives near a coast.

The roundup of dolphins in Taiji is a practice that has been going on for years, and it is not one that will disappear overnight. However, every small victory is essential in the preservation of marine life, and with someone as courageous as Williams on the front lines, the future of dolphins is in good hands. Arya Stark would be majorly proud.

More like this
Maisie Williams & Reuben Selby Are Fighting Climate Change In Matching Outfits
By Aoife Hanna and Rachel Mantock
Taylor Swift, Kerry Washington & More Speak Out On Uvalde Mass Shooting
By Jake Viswanath
Rebekah Vardy & Coleen Rooney’s Trial Has Officially Begun
By Bustle UK
'Games of Thrones' Fans May Recognise This 'Conversations With Friends' Location
By El Hunt
Get Even More From Bustle — Sign Up For The Newsletter