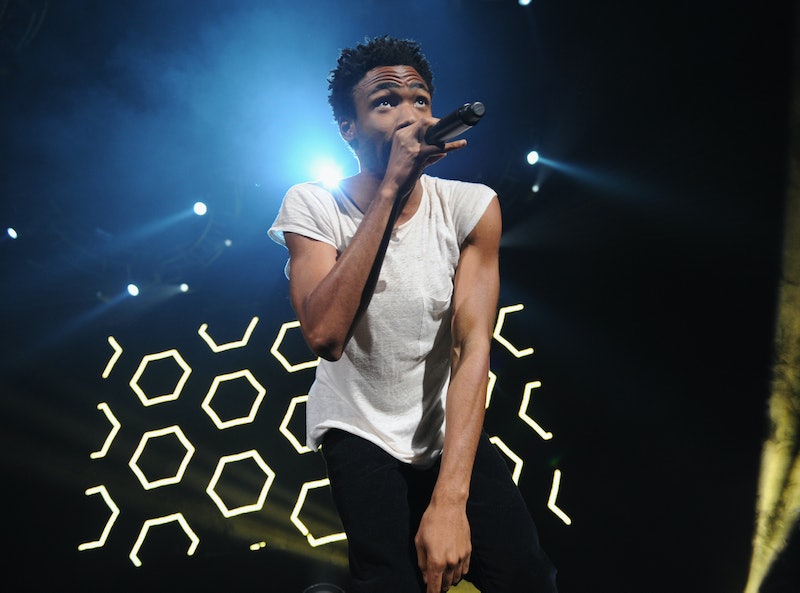 If you thought you knew Donald Glover's musical alter ego Childish Gambino, then you need to listen to his third album Awaken, My Love! immediately. Childish Gambino hasn't just evolved with his third album, he underwent a revolution in sound. The twisty, simile-laden rap rhymes are gone, replaced by a funky, '70s sound that is both original and a throwback to a bygone era in music history. Awaken, My Love! has soul, rhythm, and a touch of the blues pumping through all 11 extraordinary tracks. Childish Gambino is reintroducing '70s funk to the world through the prism of harsh modern realities, and these smart jams need to be heard by everyone.

Trust me, you need the entire album in your life, but for now, the one song from Awaken, My Love! you need to listen to first is the politically charged "Boogieman." Don't let the deceptively upbeat track deceive you, "Boogieman" takes a hard look at what it is to move through the world as a black man. In the song, the fear of being seen as a threat merely by existing and the fear that another kind of boogieman with a badge is just waiting to pull the trigger manage to push and pull at each other in what's on the surface a rocking R&B track that would make Prince proud.

"If you point a gun at my rising sun / Though we're not the one / But in the bounds of your mind / We have done the crime," Childish Gambino sings. The lyrics conjure up reminders of countless news stories about unarmed black men being gunned down. Who is the real boogieman when so many innocent lives are lost seemingly due to longstanding and unfounded fears and prejudices?

"Boogieman," with its '70s synth sounds and soul-inspired backing vocals, could easily come from another era if its message was not so eerily relevant. The track is far from the only one with a powerful, political message behind it, but it exemplifies everything that makes Awaken, My Love! a late contender for the best album of 2016. "But if he's scared of me, how can we be free?" Childish Gambino asks.

The song would fit in perfectly on the soundtrack of Glover's other 2016 masterpiece, FX's Atlanta . It speaks to the heart of being a black man in America, and how little has changed since the '70s. Assumptions are still made, black men still have to prove their innocence because the system appears to presume them guilty by default, and they still move in the world seen as "boogiemen" by far too many people. "Boogieman" is heartbreaking, powerful, and exquisitely composed. Start with it, and then settle in for the rest of the album and prepare to be impressed.

This is Childish Gambino as you have never heard him before — confident, original, and with something real and vital to say.

More like this
Becky G Once Had A Fear Of Speaking Spanish. Now She's Topping The Latin Charts.
By Tess Garcia
BTS Reveals 'Proof' Will Be 3-CD Album & Here Are The Tracklists
By Grace Wehniainen and Alyssa Lapid
Cardi B Explains To David Letterman Why She Uses Her Star Power For Politics
By Jake Viswanath
The Very Best Quotes From Dr. Taylor Swift’s NYU Graduation Speech
By Grace Wehniainen
Get Even More From Bustle — Sign Up For The Newsletter