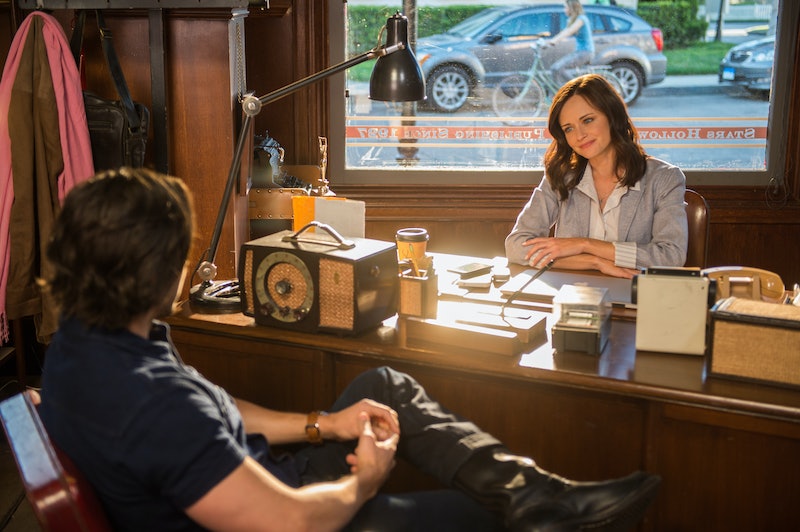 If you’re a true Gilmore Girls fan, you’re probably still reeling over the Netflix revival and those final four words. Although it wasn’t made completely clear in the finale, there were definite signs that Rory and Jess could end up together in the future, despite the fact that those last words seem to imply that Logan is probably the father of Rory's child. Those two were never quite on the same page throughout the entire series, including the revival, and as someone who is both team Jess and team Logan (controversial I know), the revival only confirmed, for me, that Jess was the one for Rory.

The ending of the series left fans eager for more, and while there’s no plan for the show to come back, everyone has been coming up with their own conclusions on what’s to come for Rory. Some think that Logan will dump his fiancée Odette and come back to Rory, while others think she will raise the baby alone. I think there’s a major love triangle in Rory’s future and I’m not the only one who believes this. “I’m thinking it’s Logan’s kid and Jess is going to fight for her,” Scott Patterson told EW after the show aired. There you have it — Luke Danes himself thinks that Jess has a chance to win Rory’s heart over again. Even if you're still skeptical, there were just too many clues in the Gilmore Girls revival that support the theory, such as:

1. The Mirroring Of Lorelai

“Full freaking circle.” That’s the only way to describe the ending of the Gilmore Girls revival. Yes, Rory is a 32-year-old woman, not a teen like Lorelai was when she got pregnant, but you can’t deny the similarities of her about to become a single mother. Just think about how Logan, presumably the father, is rich and has his whole life ahead of him — sounds like Christopher, right? Then there’s Jess, who pretty much mirrors Luke in every way, except the whole grumpy diner owner thing. It’s a major clue and hint that these characters are falling into place the same way we started the series, with Jess ending up Rory's soul mate, like Luke was for Lorelai.

You couldn’t have missed it. In "Fall", after Rory runs out and hugs Jess, showing him the chapters of the book she wrote, he looks back in the window at her. Sorry, but that look was the exact same look Luke used to give Lorelai pre-Season 4. It’s fate.

3. The Fact That He's Her Voice Of Reason

Every single time Rory has lost her way in life, Jess is the one to bring her back. During the dark years of Yale and again in the revival, he always encouraged her to do the right thing to get her back on track. That’s what she needs in a guy.

4. His Constant Return To Stars Hollow

Stars Hollow is an important part of Rory's life. And while it’s easy to see Jess living there since he has family there, it's pretty much impossible to imagine Logan settling down in the town. Rory will eventually go back to Stars Hollow to raise her baby. It’s inevitable. Perhaps Jess will follow suit.

5. The Finality Of Logan And Rory

Their ending was a perfect good-bye and a sign that these two probably should probably just stay apart. The fact that they were both cheating on their significant others shows that this probably isn't a relationship that’s going to last in life. The only guy Rory didn’t cheat on throughout the series is Jess.

“It was in the cards, Lorelai and you. From the first moment I saw you two together, no one was getting between you guys.” Rory's talk with Christopher was basically a major clue that in the end, she would end up raising her baby alone, but that it isn't necessarily a bad thing. It seemed like she needed confirmation from her dad that not getting together with Logan was the right choice.

7. The Fact That Jess Is Single

Out of all of Rory's exes (with the exception of Paul), Jess is the only single one in the bunch. It’s not a clue so much as an observation that the duo could revisit their romance, if he’s potentially waiting for her.

8. His Talk With Luke

Luke asks Jess point blank what’s going on with him and Rory and Jess says that their romance is “long over.” Even Luke thinks that there’s still something there between them.

9. Rory's Honesty With Him

Ever since their relationship ended back in the day, Rory has always been able to be herself around Jess and be completely honest with how she’s doing in life. She never admits her failures to the other guys, especially in the revival.

Jess got the only speaking role of Rory's exes in the trailer. I’m taking it as a clue.

Rory resolved things with Logan and had a nice chat with Dean, but she doesn't get closure with Jess. It’s a sign that their story isn't done.

Another very Luke-moment for Jess was when he unplugged the internet, forcing everyone in the diner off their computers. It's a sign that he's Rory's soulmate, obviously.

Lorelai tells Rory at the very end that when she finds someone, “It has to fit.” That doesn’t necessarily mean any of her exes are right for Rory, but we know Logan doesn't fit. It alludes to Jess at least a little bit.

Clearly, Rory and Jess are meant to be.

More like this
'Derry Girls' Creator Teases Exciting Spin-Off Starring These Three Characters
By Olivia-Anne Cleary
'Derry Girls' Sister Michael Isn’t As Fictional As You Might Think
By Olivia-Anne Cleary
'Who Killed Sara?' Won’t Return For Season 4
By Brad Witter
Will Viewers Revisit Welcome To Eden For Season 2? What To Know
By Kadin Burnett
Get Even More From Bustle — Sign Up For The Newsletter