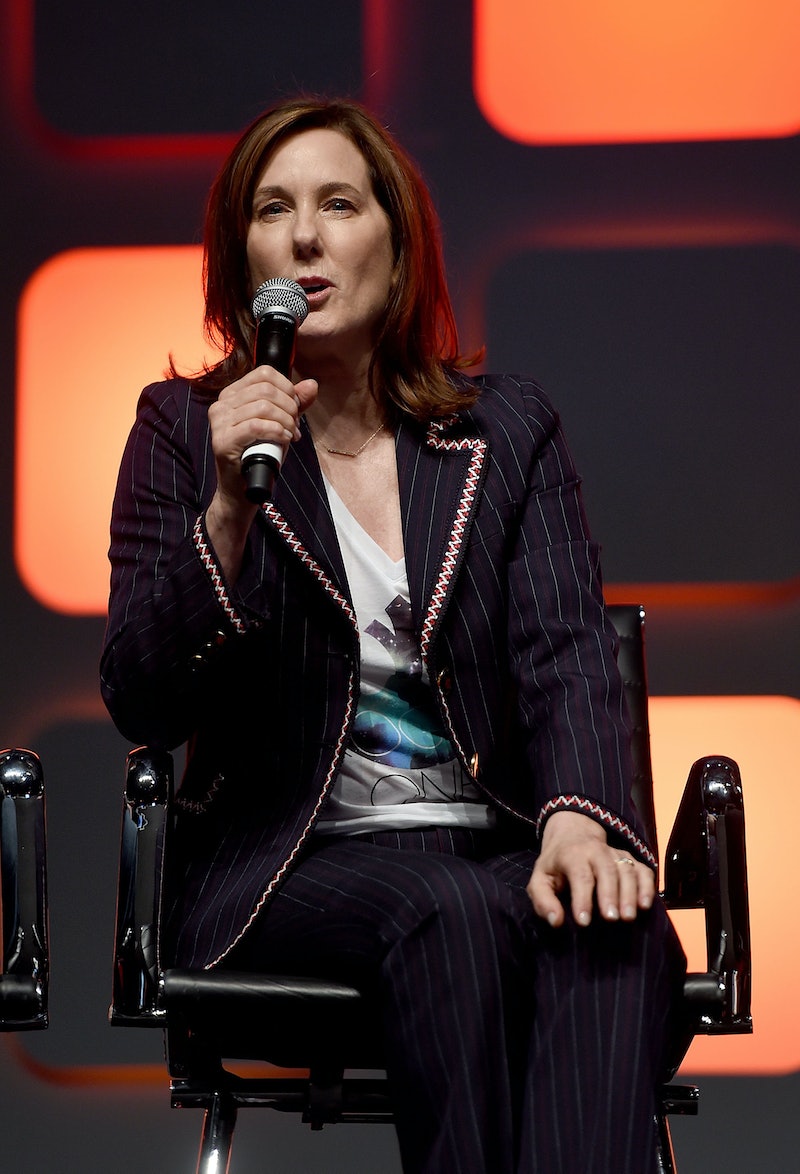 After stirring up controversy for saying that she felt there were no female directors with enough blockbuster experience to direct a Star Wars movie, Rogue One producer and president of Lucasfilm, Kathleen Kennedy, is now claiming that her comment was taken out of context. During a press conference on Sunday for the new film, Kennedy said she would consider hiring a female director for Star Wars in the future, and even said she has been in talks with potential female directors. This is excellent news for the franchise, which could make history if Lucasfilm does hire a woman to helm one of its installments.

When ScreenCrush writer Erin Whitney asked Kennedy to clarify her statements during Sunday's Rogue One Press conference in San Francisco about not enough women having blockbuster experience while Rogue One director Gareth Edwards appears to have a scant blockbuster resume himself, Kennedy responded, "That’s not true. This gentleman did Godzilla before we hired him to direct the movie. And that quote was taken out of context."

Kennedy continued on, saying, "And I, as you can imagine, have every intention of giving somebody an opportunity. So, if somebody actually moves through the process of making movies and wants to make a Star Wars movie, and shows that they have actually stepped into the role on that level, of course we’re going to consider a woman. That goes without saying."

Having a female director join the Star Wars franchise only makes sense at this point. Now that women like Kennedy and her fellow producer Kiri Hart have a great deal of creative control over the direction of the franchise, the stories being told have become more diverse onscreen. Star Wars: The Force Awakens introduced the world to a female protagonist in Rey and a black male protagonist in Finn, and Rogue One will continue to put women and minorities at the center of the Star Wars world with Jyn Erso. With women playing active roles in producing Star Wars, as well as in the stories playing out for fans on the big screen, a female director is essential if the franchise wants to continue progressing forward.

It is heartening to hear that Kennedy is not limiting her search for future directors for the franchise to men only. While male directors are already attached to Episodes VIII and IX, as well as the young Han Solo movie, there are no signs of Star Wars slowing down. There are more spinoffs in the works and countless stories to tell about the vast galaxy that serves as home for Star Wars. Kennedy has already stated her commitment to diversity. With regard to naming the franchise's first female director, Kennedy told Variety she wanted to make sure she was making the right choice: "We want to really start to focus in on people we would love to work with and see what kinds of things they’re doing to progress up that ladder now, and then pull them in when the time is right."

Kennedy may not have chosen the best words to get her point across, but from her latest statements, it is clear she wants to continue to see Star Wars become more and more inclusive. The fact that she is already discussing the future of the franchise with female directors is an excellent sign. During the conference, Whitney went on to ask Kennedy if she had spoken to any female directors in particular and Kennedy assured the audience she had. "There are many," Kennedy said. "And I’ve talked to most of them. There are many out there."

Kennedy has led the charge when it comes to making sure the Star Wars universe is one where everyone feels included. There is no reason to doubt that her commitment extends to the creative minds who bring these fascinating sci-fi stories to life. It does not seem to be a matter of if Star Wars will ever have a female director now, but rather when it will happen.

Editor's note: This article has been updated from its original form.